Grip control is one of its key components in any grappling exchange as a dominant grip will allow an athlete to control the distance, secure a position or finish a match.

Although jiu jitsu’s gi variety offers an array of different collar, belt, pant, sleeve, etc controls, in no-gi the hand/arm control usually circles around 3-4 simple grips, which can also be used with the gi. The origins of these is directly related to ‘the oldest sport in the world’ – wrestling, and often still bears the names used in that sport: 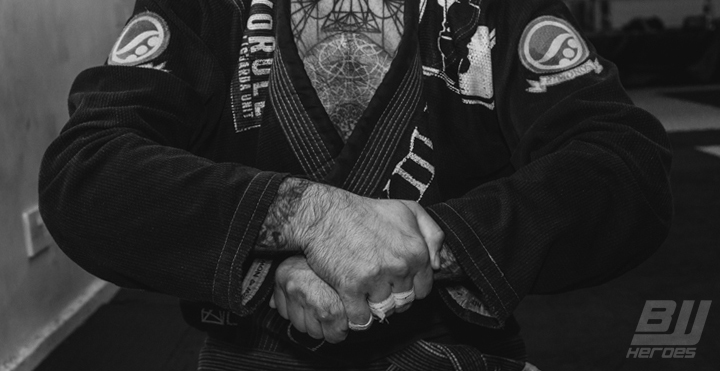 The ‘Ball and Socket’ grip is one of the most common and versatile controls in jiu jitsu, it can be used during stand up to control an opponent’s upper body, waist or legs in a sweep single type circumstance. It is also commonly used to secure the seat-belt position from the back and to finish chokes such as the guillotine, or peruvian necktie.

One of the key points in the Ball and Socket grip is it’s versatility. Easily adjusted to hold grapplers of different sizes and cover different distances by adjusting the grip along the hand/forearm, while also easily transitioning to the gable, pretzel or 10 finger grips.

An excellent weapon for the clinching game, the Gable allows you to control the distance and apply pressure, being often referred to as a ‘Greco Grip’ due to that characteristic. The gable is also highly applicable in a submission environment to finish straight armlocks such as the ‘violin’ or chokes like the arm triangle (katagatame), the Monson (north-south) or the Japanese necktie, to name a few.

The Gable grip is also referred to as Gable Lock and as Monkey Grip.

The S-Grip, also named Chain Grip or Chain Hook, is another important control in wrestling and jiu jitsu’s vernacular. Less versatile than the aforementioned Greco or Ball and Socket counterparts, the S is particularly viable in the clinch and often used to complete double-leg takedowns, the famous suplex and other lifting techniques.

On the ground the S-grip is not as common, but can be used to complete chokes such as the peruvian necktie and north-south choke.

Though more reliant on finger strength than some of the other grips here shown, the S-grip is an excellent way to cover more ground in a controlled manner without unclasping the hands.

Less common than the grips previously mentioned here, the Pretzel Grip has gained notoriety in recent years in the no-gi jiu jitsu scene. The Pretzel is not seen often in wrestling, having in its best application clearing any gaps/spaces when attacking the neck. More often than not being used to finish an arm in guillotine.

Very common wrestling grip, also used in jiu jitsu, not only for takedowns (sweep single control), but also as a seat belt control, performing a similar role as the Ball and Socket, with the advantage of helping the elbows remain closer to our own ribs.

In jiu jitsu, one of the most predominant athletes who uses this control is AJ Agazarm, who often calls this grip the ‘Agazarm’.