The Truck is a grappling position often used in the sport of jiu jitsu as both a transition to a back control or a control position in itself, from which one may submit an opponent. In no-gi rules the Truck is commonly associated with Eddie Bravo and the 10th Planet system, as Bravo and his students were the first known to develop a program around the position and showcase it to the submission grappling community. Within the gi circuit, the truck is frequently associated with the Mendes brothers (Rafael and Guilherme) and their style, particularly in relation to the Berimbolo and the Crab Ride position.

THE TRUCK IN WRESTLING

The Truck control and many of its variations and entries date back to wrestling, a combat style that was using this position on a competitive platform many years prior to jiu jitsu. In wrestling, one of the more common entries for the Truck is the famous leg ride (pic 1), a position that is used to expose the back of the adversary, while being also a strong hold to secure a pin. 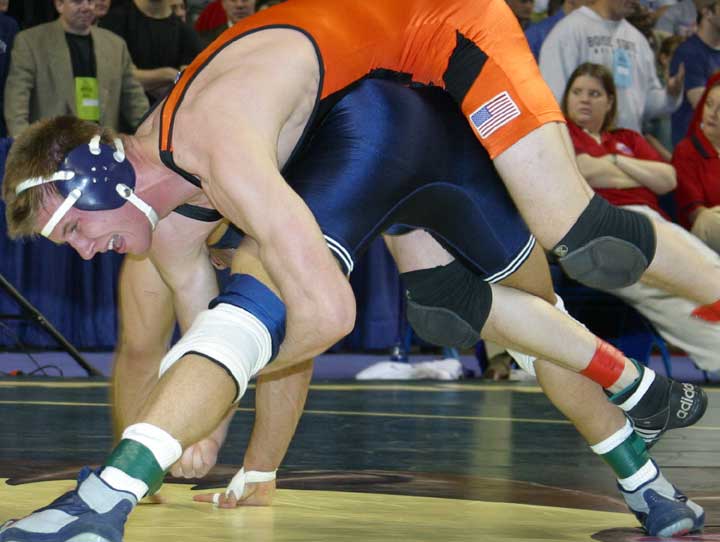 Two of the more common uses for the Leg Ride control in wrestling, are the Wresting Guillotine (known in jiu jitsu as the Twister) and the Banana Split positions. Both of these are intended to be pins, not submissions (though that line is often crossed while battling for control).

THE TRUCK IN JIU JITSU

The wrestling leg ride/guillotine set up was learnt by Eddie Bravo during high school. The now famous Jean Jacques Machado black belt started applying this position under jiu jitsu rules when he was a blue belt, perfecting the setup from side-control to achieve not a pin, but a tap – back when jiu jitsu’s rule book was still unclear as to where it stood in regards to spinal locks. A similar setup is shown below in wrestling.

Once the sport of jiu jitsu, particularly the International Brazilian Jiu Jitsu Federation (IBJJF), started distancing itself from knee twisting locks and attacks to the vertebral column, Bravo went on to focus solely on the no-gi circuit, where he continued developing his own ideas on a separate route from that of the sport’s mainstream. Among those ideas was the Truck position which he enhanced and instilled in no-gi culture as well as a few of his students – particularly Geo Martinez. In the footage below, Eddie Bravo describes his first successful Twister submission in competition, back when he was a blue belt.

While Bravo carried on developing the Truck for his grappling program, other athletes such as Ryan Hall, Leonardo Vieira, André Galvao and a few others started using a similar ‘Twister Roll’ in gi and no-gi competitions around the early/mid 2000’s, a position Ryan Hall labeled at the time as the “Rolling Back Attack”. As the name suggests, the use of this control leaned towards establishing back control and not the submission, and was achieved mainly from half and ¼ guards.

Only a few years later, galvanized by the (re)birth/growth of the Berimbolo, Crab Ride and the Leg Drag – set by Rafael and Guilherme Mendes during the late 2000’s, the Truck position started truly flourishing under BJJ’s gi environment. The generation that followed the Mendes’, and their style, carried on the Truck’s legacy as a set up for guard passes and back takes.

One of those who explored the potential of the Truck control, not only from the Crab Ride but also from the Leg Drag, were the Miyao brothers, as displayed on the gif below of Joao Miyao competing against Márcio André as a purple belt.

With the Truck prospering in both a points environment and under the submission only platform, we expect to see plenty of enhancements to this position in the forthcoming years.

ATHLETES KNOWN FOR THEIR USE OF THE TRUCK
THE TRUCK VIDEOS

Geo Martinez Shows the Truck and its Uses

Geo Martinez Entries for the Truck

Eddie Bravo and his Concepts on the Truck Position

The Truck from Mount Defence by Garry Tonon