The Tarikoplata is a joint-lock type submission used in grappling which was first unveiled in jiu-jitsu’s sporting circuit by a young Norwegian competitor named Tarik Hopstock during the mid-2010s decade. The Tarikoplata works as a variation of the kimura lock (also named double-wristlock or gyaku ude-garami), relying on isolating the shoulder and elbow joints with the use of a leg-arm frame which allows for the attacker to apply leverage against both of these joints (though mainly on the shoulder). The Tarikoplata bears some resemblances in structure with another famous shoulder-lock, the Baratoplata, however, the mechanics of the Tarikoplata are diametrically opposed to those of the Barata-lock.

First and foremost, as is our tradition when publishing our ‘History Of Technics’ articles, a little disclaimer: It is impossible to know if the concept of the Tarikoplata had been created in any of the 100’s of grappling styles that have wandered the Earth for the past 3000 years prior to this modern development, it is indeed likely that it did. However, as we stand, in current-day jiu-jitsu, the first person to unveil the position to a mainstream audience was a young practitioner from Norway named Tarik Hopstock.

Born in Oslo, Norway, Hopstock’s knack for jiu-jitsu was evident from the get-go, and by the time he was a juvenile competitor Tarik was already regarded as one of the most promising grapplers in Europe.

The concept of the Tarikoplata was created inside the Frontline Academy, a well-known Norwegian jiu-jitsu gym led by Brazilian black belt Eduardo Rios, where Tarik Hopstock’s own grappling skills were developed.

“It started with how I struggled to pull people’s arms out from the top kimura position” Tarik explained to BJJ Heroes on September 2019. “This was around late 2014 (…) I was trying to solve the [kimura] problem with some of my teammates. A lot of the times I would try to almost deadlift the arm out or just go back to the Darce choke. My thought was that there had to be some technical way to advance with attacking the arm. After some trial and error, I ended up passing the leg over my partner’s hips.” But this was not the end product. Both Hopstock and his training partner believed the move was too risky to pull in competition and placed it on a shelve for some time. But that day to bring it back did come: “Later I started to recognize the position for the bottom and successfully applied it to my game. We didn’t even call it Tarikoplata until I had gotten it numerous times in competitions.” Hopstock explained.

Over time Tarik Hopstock continued trying to perfect his discovery, and soon his work was ready to be exposed to an audience. His first real “test-drive” took place in 2015 at the “IBJJF Gothenburg Open, where I competed as a blue belt.” said the Norwegian, “I also failed to finish it multiple times during that event or just rolled out of the mat area.” There was clear room for improvement then. “At first it was just a submission, but eventually, as my opponents came up to defend it, I would have to find a way to get up on top again. This forced me to think of it more as a wholesome position of control. It took a long time to perfect some of the details“.

As aforementioned, the Tarikoplata was perfected by Hopstock on the Frontline mats, by sparring his training partners, but there was also outside influences in the development stages of the position: “I picked up details along the way from a lot of good athletes. Frontline Academy has a lot of skilled brown and black belts and I have probably copied at least one technique from all of them, which in return probably gave such a great and wide foundation. Seminars and visiting other academies have also given me a lot of details in return. Like the entry [set-up] I use, from knee shield to the Kimura trap system, is something I learned from Roberto “Cyborg” when he had a seminar in Oslo“.

Well Known Athletes Who Use Tarikoplata 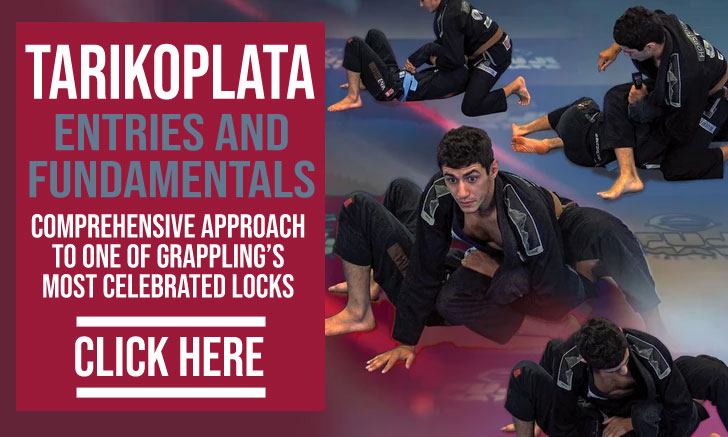