The kimura lock, also called double wristlock (catch wrestling), chicken wing or gyaku ude-garami (judo) is a grappling submission hold of uncertain origin, being catch wrestling and judo the likely authors of the position. In Brazilian jiu-jitsu the submission bears the name of “Kimura” after the famous athlete Masahiko Kimura who defeated Helio Gracie with this joint-lock in a legendary match for combat sports, which took place on October 23, 1951. The submission relies on isolating the shoulder and elbow joints with the use of a double wrist grip which allows for the attacker to apply leverage against both of these joints (though mainly the shoulder).

Although similar positions to the kimura lock are seen in old German shoot fighting manuals dating as back as 1520, or even in the Khmer temple, Cambodia (12th century). In catch wrestling, the creation of the double wristlock is often attributed to Lorigo Morelli (also known as “Tony” Morelli) during the 1920’s. The lock was also utilized in freestyle wrestling, being Robin Reed one of the most decorated spreaders of the position, having paved the way to a gold medal at the 1924 Paris Summer Olympics with several pins performed with the use of the double wristlock.

In Brazilian jiu-jitsu, the position became highly popular due to Masahiko Kimura, the judoka who defeated Helio Gracie in a grappling match, by way of gyaku ude-garami, the lock that now bears his name in the jiu-jitsu circuit.

After the defeat of Japan in World War II, the United States led the ally forces in the occupation and rehabilitation of the Japanese state. This occupation enacted widespread military, political, economic, and social reforms, one of these reforms had judo banned from the Japanese school system. This was a major blow to many judoka who had a steady income teaching the sport, among these unfortunate judokas was Masahiko Kimura.

Born in September 1917, Masahiko Kimura was the best judoka of his generation, but with the aforementioned judo ban, he decided to sign up to an international entertainment company that toured around the world showcasing judo athletes in a series of demonstration matches. The tour led Kimura to a professional wrestling promoter named Aru Karashiko, it was through professional wrestling that Kimura entered Brazil, contracted to tour the South American country and perform on stage a series of pro-wrestling matches.

When Carlos and Helio Gracie found that Kimura was in Brazil, they immediately challenged the legendary Japanese to a grappling match against Helio. Kimura refused the offer, failing to recognize the legitimacy of Helio Gracie. To test the Gracie family’s credibility on the mat, they organized a super fight against another apt Japanese who toured with Kimura, Yukio Kato, who was 22 years old and weighed around 70kg (154lbs), a similar weight to Helio’s.

The iconic Gracie fought Kato twice, the first match being a draw and the second a submission win to Helio Gracie. The win forced Kimura to accept the challenge, and the fight was set for Rio de Janeiro on October 23, 1951, in what would be a three 10 minute round fight.

There are certain myths surrounding the clash between Kimura and Helio Gracie, many of these spread by the Gracie advertising strategy who used this bout to boost the profile of their fighting style. The first being that Kimura had mentioned that he would consider the match a loss if Helio lasted more than 3 minutes with him. We could not find a record of these words being mentioned by the Japanese, in any of the media and in fact, according to Kimura’s statements, he used the first 10 minute round of the match to test Helio’s skills, finishing him early in the 2nd round.

Another myth is that there was a 36kg (80lbs) weight difference between the two fighters. The match had no weight limit and none of the fighters were weighed in. Kimura was certainly the heavier of the two, and although we can only speculate, the weight difference was more likely closer to a 10kg/22lbs considering both fighters weights from previous matches.

Helio saw this match as a retirement fight, he was 39 years old (Kimura was 34). He was quoted after the bout saying that he knew he had very few chances to win against the famous Japanese, but he saw it as a chance to test his skill. He would return from his retirement in 1954 and again in 1955.

The Kimura Trap System was developed by David Avellan in 2012. It is a submission system designed to utilize the kimura lock from every position possible in combat, with many transitions, sweeps, passes, submissions, takedowns, and takedown counters. While techniques in this system have been used before in a stand-alone fashion, what is novel about this approach is how they have been all combined and designed to flow from one technique to the next in a easy to learn system.

The term Kimura Trap is now used to describe attacking with the kimura lock WITHOUT using it for a submission finish. Rather, the kimura Lock is used as a powerful control position to transition into other submissions, guard passes or sweeps. 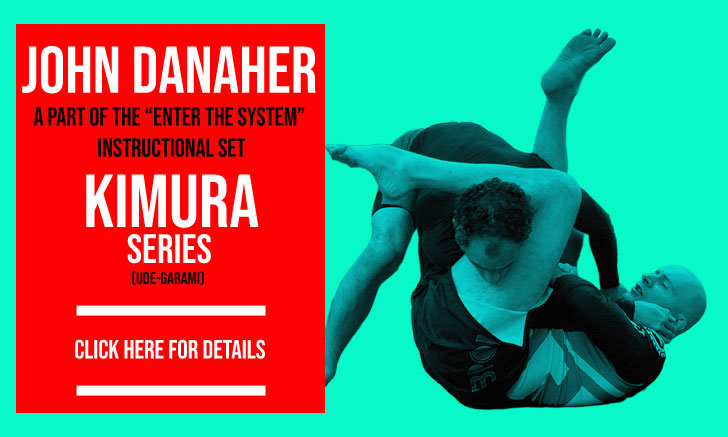 The kimura lock has been one of the most popular submissions in the sport since it’s creation, especially in the no-gi aspect of jiu-jitsu, being associated with a variety of transitions, from back takes to chokes and armbars.