Mata leão, meaning ‘lion killer’ in Portuguese, is the name of a popular strangle or choke-hold in Brazilian Jiu Jitsu. This same position is named hadaka jime in Judo, and rear naked choke in the American grappling circuit, although John Danaher and his students call it the ‘Rear Naked Strangle’. Although the ‘hadaka jime’ name may be utilized for two different types of chokes, the ‘mata leão’ refers specifically to one particular form. The mata leão is applied when the attacker wraps his (example) left arm around the opponent’s neck, placing the crook of his elbow below the opponent’s trachea. His left hand then grabs his own upper right arm and the right hand is placed behind the opponent’s head or on top of the hand, to help apply the pressure.

The History of the Rear Naked Choke

The mata leão choke has been around since the early beginnings of grappling. In Judo, the hadaka jime literally translates to ‘naked choke’, as to explain that this choke does not require the use of the gi (kimono). In Judo, the hadaka jime can be used to explain both the mata leão form and the ‘palm to palm’ choke from the back, in Portuguese often called ‘estrangulamento de mão-com-mão’. 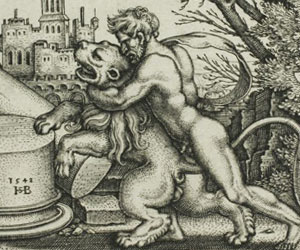 The popularity of the mata leão in MMA and Jiu Jitsu is attributed to the Gracie family, who popularized the choke in no holds barred fights (vale tudo) throughout the world, particularly Rickson Gracie, who had in the mata leão his most utilized finishing move throughout his career.

Though the association between this choke and it’s lion killing capabilities can be dated back to as far as the early 1500’s by way of Sebald Beham’s “Hercules killing the Nemean Lion” (1548), from The Labours of Hercules (1542-1548), it seems as though the name mata leão, only started being used in Brazilian jiu jitsu and vale-tudo around the 1960’s decade. This re-naming of the choke (called “technical choke” until then) is often attributed to Reylson Gracie, who when interviewed for this piece regarding this matter said:

Yes, I saw some photos of Mas Oyama, founder of kyokushin karate in 1963. I remember saying “This guy is a lion [E.N. common term for big strong man in Portuguese], but I could get a technical strangle-old from the back on him, the ultimate lion killer. – Reylson Gracie 11/2015

The name seemed to spread like wildfire among the jiu jitsu community, sticking to this day.

Though the rear naked choke has always been part of grappling tournaments, judo, BJJ, catch wrestling, etc, it was through Royce and Rickson Gracie’s demonstrations in no holds barred shows around the US (UFC) and Japan (Pride Fc), respectively, in the early 1990’s that sparked the interest of the general pubic towards this choke and its ‘lion killer’ status.

Clark Gracie demonstrates how to do a Rear Naked Choke