Today we bring to your attention one of the hottest prospects in the sport of jiu-jitsu and mixed martial arts (MMA), Miss Iasmim Casser, a very special young athlete whose life could easily one day become a successful Hollywood movie.

Iasmim’s humble beginnings had her starting her life in a small rural town located in the State of Rio Grande do Sul, Brazil, named Povo Novo, thousands of kilometers away from Rio de Janeiro’s glamorous Zona Sul or São Paulo’s expensive Moema neighborhood.

At the age of 13, Iasmim started learning music. Her thirst for knowledge led her to theater, which became a gateway to circus training. In an interview with BJJ Heroes in June 2021, Casser rewinded her memories and looked back on those days fondly, explaining that this “was my first experience doing something physical. The training was very intense working on flexibility, balance, body awareness, and strength as well. We had a few shows regionally.”

These extra-curricular activities provided something of tremendous value to Iasmim, a skillset. Although very young, Iasmim displays the clairvoyance and determination of a seasoned veteran in the game of life; character traits, she explains, have always been present in her demeanor: “I grew up in poverty, chaos, traumas. I was stuck in a reality with no opportunities, so I knew if I wanted to change things, I would have to take action and make the opportunities myself. Against the odds, against the impossible.” Iasmim said of her mindset. “Never have I had someone tell me that I needed to be like this. Most people in that reality don’t see a way out, they just accept it, for which I don’t blame them since the world can be quite unfair (…) But somehow, ever since I can remember, I always saw it all, and I had this desire to change things, that was just carved in my skin, and I couldn’t help but fight that situation with all I got.”

Packing little more than her guts, hopes, and dreams, Iasmim Casser left her parents’ home at 14, moving to the closest city she could afford, Pelotas, RS. The hook at the time was a possible degree in chemistry, although, given her family’s dire finances, she could only rely on herself.

By hook or by crook, Iasmim made ends meet, displaying that same perseverance we alluded to earlier: “I was approved by a special federal school, very hard to get in, to study chemistry as a technician” She attended this special institution while keeping her standard high school schedule, all the while working as a music teacher to pay for a room at a college dorm. Her finances were scarce and by her own admission, she “went hungry many times“.

During her time in Pelotas, Iasmim started writing her history in martial arts, soon after she joined the Muay Thai Combat gym. There she was taught by coach Rogério Menna. The experience led Casser to discover a new passion, fighting.

As you may have figured out by now, there are no half-measures with the Povo Novo native, as such, Iasmim quickly succeeded at striking, earning a Muay Thai World Championship in Thailand by WMF as a juvenile. This was only the tip of the iceberg of what was to come. 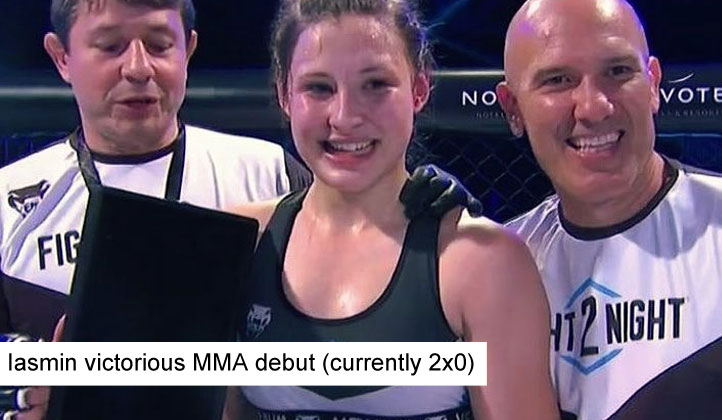 Iasmim’s Muay Thai experience and success opened important doors onto other combat sports. The first logical connection to be made was mixed martial arts (MMA), one of the most popular sports in Casser’s home country. The desire to succeed in the cage was her link to grappling: “I started having some contact with jiu-jitsu with the only goal to defend myself in case someone took me down [in MMA]. Jiu-Jitsu turned out to be a passion as well.”

A brown belt named Fabricio Machado was Iasmim’s first gi jiu-jitsu instructor. Casser also practiced no-gi with Gustavo “Caroço” at the same location (Grand Team Julio Secco Pelotas), and with Daniel “Folgado”, all at Julio Secco’s martial arts school in Rio Grande. The experience only fueled the young athlete’s desire to become a professional MMA fighter, and with this in mind, she opted to move to the state’s capital, Porto Alegre, where she would have a wider range of high-level coaching and sparring. The bold move would once again reap benefits for the talented competitor.

“I moved to Porto Alegre RS, where I was granted the opportunity to train MMA at Boxer MMA [Fabiano Montes Doca]. Shortly after I got to know Guto Campos who inspired me to train jiu-jitsu at another level, so I started training regularly at the Guetho Jiu-Jitsu Academy.” 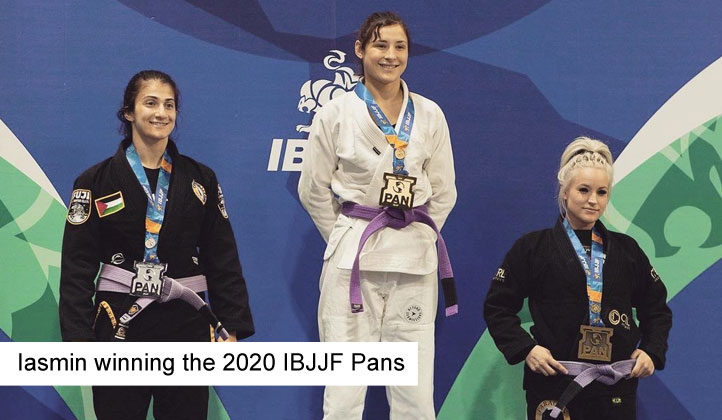 Her interaction and enthusiasm earned Iasmim the blue belt rank from Guto – one of the senior members of the Atos Team – and granted Casser her first grappling experience on United States soil, when the young Brazilian visited the Art Of Jiu-Jitsu Academy (AOJ) in Costa Mesa, California, one of the sport’s most revered training facilities. The gym is owned by the Mendes Brothers (Guilherme and Rafael Mendes) who, at the time, were also affiliated with Atos.

What followed from this initial interaction with the Mendes Brothers was yet another step up in the young competitor’s career, as explained by Iasmim: “The universe shook in a crazy way and as I went to visit AOJ, I was offered by Gui Mendes the chance to be part of their team. He saw something in that spazzy MMA fighter who knew little about jiu-jitsu. For some reason, he thought I had potential in that sport more than just to use it in MMA. So I moved to the USA, three years ago and started my journey in BJJ with the Mendes Brothers.”

Guilherme Mendes‘ intuition did not fail the experienced coach as Casser went on to win double gold at the IBJJF World Championships the following year, and earn her purple belt.

Since her rampant 2019 success, Iasmim has been promoted to brown belt. Sadly for grappling fans, due to the financial and competitive uncertainty jiu-jitsu athletes endured during the Covid-19 pandemic, Casser returned to MMA, now training at the RVCA gym, a professional MMA academy led by Jason Parillo: “AOJ has a very strong link with RVCA [lifestyle brand with strong links in MMA and BJJ] since Pet Tenore [founder of RVCA] was the founder of AOJ with the Mendes Brothers. So I feel at home, just in another branch. The getting punched in the face, branch. Hard. But I love it“.

In her closing remarks, Casser referenced her dreams of becoming an MMA World Champion and a BJJ black belt World Champion, which, given how far this young woman has come, is well within her reach.