We look at our athletes as the stars of the sport, the gladiators, and rightfully so. They are the ones putting their bodies and health at risk for our entertainment. Often overlooked, however, is the importance of the work being done behind the big stage, at the gym. Without the support of a solid team and inspiring coach, very few athletes have ever successfully reached the pinnacle of their sports, and jiu-jitsu is no different.

Time and time again we have seen outstanding grapplers fall short from reaching their full potential by opting for a ronin approach to their training. Teams, for the most part, are where stars are born and in nogi, few have incandesced more young grapplers than Mr. John Danaher, head coach of the Renzo Gracie Academy in New York City.

Last month we discussed some of Danaher’s success at the ADCC in one of our articles – ADCC Team Report By The Numbers. But those numbers could not show the full scope of the work put out by the Danaher Death Squad, and for that reason, we decided to return to John’s top performers, hoping to pour some more depth to our analysis.

To assess the team’s trends and go-to positions we analyzed a total of 43 matches of 5 DDS athletes over the past 2 years, namely Ethan Crelinsten, Nicky Ryan, Gordon Ryan, Garry Tonon and Frank Rosenthal. We have opted to exclude the other well-known face of the team, Aussie star Craig Jones, given that he shares his training time with Absolute MMA in Australia and coach Lachlan Giles. Given Jones’ time in the Southern Hemisphere, his game could bring diverging data. Granted, Crelinsten also spends time away from RGA, however, his other coach (Firas Zahabi) is himself a Danaher black belt and likely follows that same system.

Out of the 43 matches, 35 were victories and 8 defeats, in a mix of super fights and tournament settings with a variety of rulesets – ADCC, Kasai, Sub-Only, Third Coast and more. Below are a few of the trends and numbers taken from that data collection.

Although literate in the art of taking others down, this area of grappling is not something the DDS crew is known for. The data produced in our analysis shows that the team’s urgency lies in being on the ground as soon as possible, where they can commence the battle for positional control, lengthy-standing battles were not a common practice here – unless strategy deemed it so. The players analyzed here mostly played offense when standing, and, if they could not drag their opponents to the mat, they would just as happily sit down to guard, with 18 guard pulls observed.

When standing Danaher’s pupils appear to favor upper body attacks, for good reason (more on that further down), with Garry Tonon being the more versatile of the squad, playing well both inside and outside, using faints and level changes as a big part of his grappling portfolio. The others looked for snap downs to front headlocks or body locks.

The total takedowns accounted for were 12, 6 for the DDS, with the squad’s athletes being taken down 6 times in return by their opponents*. Below are the takedowns scored by the 5 Danaher students. 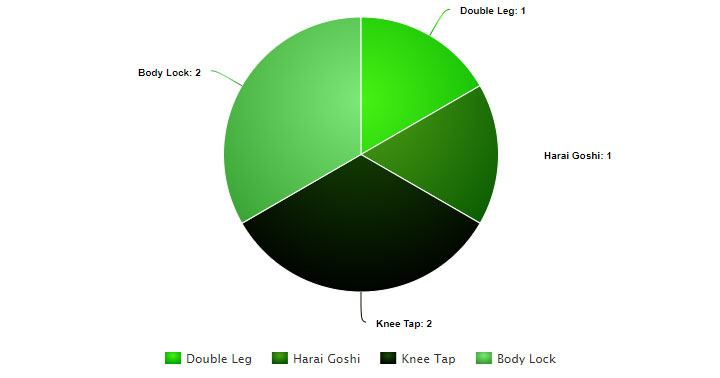 * On this graph, we only rated takedowns where full back-exposure (to the ground) and top-control was established.

But the standing game is not only about the takedown per se. The main concern of the team’s players appeared to be in using those aforementioned upper body tie-ups to get to the ground in advantageous positions, particularly back attacking prone positions.

Back control is by far the weapon of choice of the DDS, a system shared by every single one of the team’s athletes observed. Conquering that all-important dominance takes a number of paths, one of which being the stand-up transitions. These accounted for 28% of back dominance conquered by the DDS crew, a big chunk of the back taking pie as shown below. 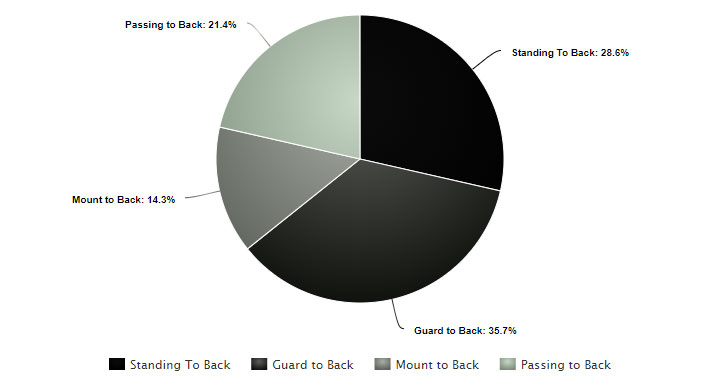 To get there from standing, the most commonly used controls were front headlock and body-lock, but these positions were also adopted from other starting sequences, particularly the body lock from the guard, which was used systematically to get back control, 18% of the times to be precise, in a combination that resembles this: Sit-up guard > wrestling to body-lock > back with hooks as shown below.

If a secure transitional/intermediary control was not achieved (i.e. body lock, headlock, etc), the hunt for that said control would generate a scramble, which was equally used to secure the desired back exposure.

Once the back was fully secured, it was as close to “game over” as one could get. This, we would argue, is the most impressive stat of the whole analysis. In 7 out of 10 times a DDS member took an opponent’s back, a strangle was achieved. That is a 70% submission rate from the back at the highest level in this sport.

Another interesting stat is that only one of those taps didn’t derive from a fully locked body triangle control. Below is a list of the most used transitional controls to the back, utilized by the DDS. 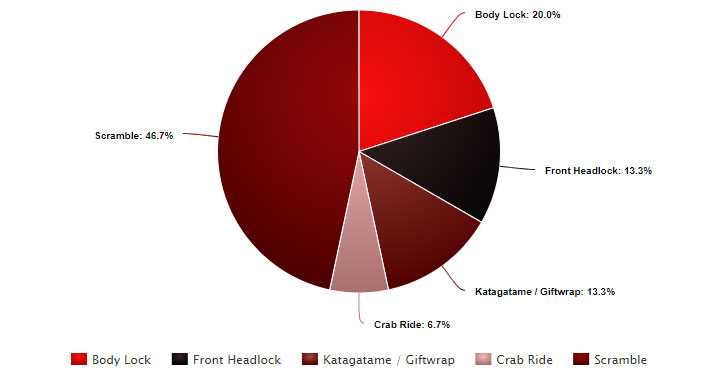 Guard retention would be the only field where the DDS crew showed lower numbers than those imposed by its opponents, with Danaher’s boys conquering 5 guard passes and getting passed on 7 occasions – the toreando pass being the Achilles heel in this department, as 4 of those passes came from this dynamic position and only 1 pass suffered derived from a pressure type approach.

As a side note, It is worth remembering that many of the DDS matches observed were fought under the submission-only rulesets and, as such, the guard pass played a smaller role in the outcome of those matches than it would have if it were a points game.

Staying true to John’s “dangerous legs” motto, the DDS squad guard system shines brightest when on the offense, as shown by the following statistic: 50% of the group’s submissions derived from a bottom playing stance, 73% of those being lower limb submissions. Another truly impressive number.

The saying goes “no one remembers a loser”, which in sports, for the most part, is correct, but hardly anyone wants to watch a boring athlete compete either. The DDS brand has gathered plenty of interest from a large audience because they are standard-bearers of offense-based, submission-oriented grappling, a prized brand to hold.

The key focus, be it from standing, playing the passing game or from their backs is heading towards check-mate positions, which in Danaher Squad’s are: Back control w/ body-triangle, saddle position and outside ashi garami. These 3 controls were used in 90% of the team’s submissions in the 43 matches observed. 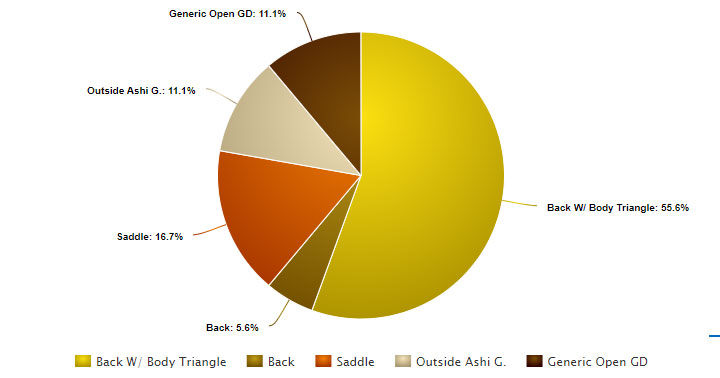 From the very get-go, every move played by the DDS system is geared towards securing any of these 3 positions. That objectivity is a distancing factor from most jiu-jitsu systems, who appeared to be more fragmented.

We will expand: While most jiu-jitsu athletes look for sweeps or passing, with the match ending submission (if it appears) being a result of that dynamic, the DDS is not leaving room for those to stand in the way of their set positions. Their path to the submission is much less convoluted and more objective in that sense. There is no urgency in getting the sweep, the urgency is in achieving these 3 controls.

With so many of the mechanics revolving around such a clear-cut goal, there is hardly any room for “random” submissions, particularly at this level. This being the main reason we do not see any of the traditional submissions (armbars, guillotines, etc), there is little to no deviation from the end-goal. This simplification may be what set them apart in the past few years.