UFC Submissions by The Numbers 2017

One of the most fun exercises we like to do at the end of each year is that of analyzing the available data and deciphering how grappling is evolving in modern day mixed martial arts (MMA).

Once considered THE most important and innovative aspect of MMA, jiu jitsu has long lost its stance in the sport and is now often relegated to a second stage. This happens for a number of reasons, the main one being that it lacks the entertainment value attributed to striking in promoters eyes. But rest assured that although slightly overlooked, this sport/martial art still holds a few standard-bearers in mixed martial arts’ prime organization – The Ultimate Fighting Championship (UFC).

Names like Gunnar Nelson, Demian Maia, Fabricio Werdum, Nate Diaz, Tony Fergusson, Beneil Dariush and many others count themselves among the elite of mixed martial arts while holding in jiu jitsu one of the most dangerous areas of their games. This rowdy bunch, alongside an army of grappling experts present in UFC’s roster have mustered a total of 78 submissions this year, which we will analyze below.

UFC and the SUBMISSION GAME

With two events lined up before the end of the year, we have so far seen 37 UFC’s and a total of 436 matches – the majority of which had its winner picked out by the judges (208). As we can see from the pie chart, although with much lower instances of victories than by way of striking, submissions still play an important role in MMA’s prime league:

The similarity to the numbers ran by BJJ Heroes in 2015 (the last time we worked on such an assessment of UFC’s submissions) is uncanny. There is room to assume these percentages are not a fluke, or a seasonal trend, but a solid marker of how mixed martial arts has developed at its peak.

TOP SUBMISSIONS IN THE UFC

If you glanced through our 2015 piece of the top submissions in MMA, you will also outline a definite trend in these numbers with the choke from the back ruling the submission game – much like it does in jiu jitsu’s IBJJF and ADCC circuits (point based BJJ). On the other hand, the ex-libris of the No-Gi sub-only revolution (i.e. EBI rules), the heel-hook has not been seen in the UFC since November 2016 – this was at The Ultimate Fighter Latin America 3 Finale (Joe Soto vs Marco Beltrán). Prior to that only in 2014 did we witness a UFC win by heel hook (1). 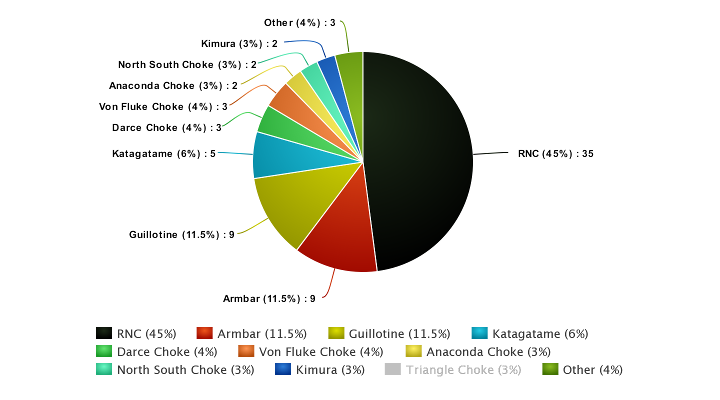 The report here shown could prove that Jiu Jitsu’s old dogma of “Position over Submission” still holds very true in mixed martial arts, where the majority of taps were accomplished from superior carefully advanced positioning maneuvers.

If some, such as the super dominant flyweight champ Mighty Mouse (Demetrious Johnson) may not come as a surprise to most when looking at the top submission achievers in the fighting game this year, others such as powerful KO artist “OSP” will. Saint Preux had a blurry start of the year against Volkan Oezdemir but came back strong, returning to his wrestling background to put two more Ws back on his record. To achieve this he looked for consecutive Von Fluke chokes, earning him a spot in the top submission artists of the year.

Together with Johnson and Saint Preux there were 5 others tied at the top of the list with two submissions each. They were: