5 years ago we wrote a piece regarding the effects each jiu-jitsu ruleset caused to the dynamics of a grappling match, using the data gathered from 4 very different rulesets (check the original article here).

The data gave us very insightful readings, which pointed out glaring differences in how athletes approach each individual scenario, and how it shaped grappling as entertainment, yet, this essay had one flaw, the size of its data pool. The 2015 “ADCC, EBI, IBJJF, GPC: How Rules Change Jiu-Jitsu” piece followed one single weight-class and only one tournament of each ruleset, therefore, we believed the topic should be revisited, this time with larger numbers of matches oserved.

With the purpose of maintaining the same objectivity as before, we have remained with collecting data from similar weight classes and number of matches per bracket, no round-robin or super fights were added to keep that same uniformity of tournament-based events with similar numbers of competitors. Below are the chosen events and weight classes from where the information was collected.

1-13 EDDIE BRAVO INVITATIONAL (128 matches from 65KG to 94KG)
– 10-minute long, no-gi matches, winner decided by submission, or EBI OT. The dynamics of EBI Overtime were not added in this assessment.

Sidenote:
With the EBI and ADCC formats, the weigh-ins take place prior to the events, therefore, when looking at [for example] a 145 lbs / 65-kilogram athlete competing in one of these tournaments, that same athlete would likely compete one weight class above in the IBJJF, as weigh-ins take place moments before stepping on the mats. Therefore, we looked at IBJJF weight classes that simulated this particular logic, meaning, we correlated 66 KG ADCC weight class to 70KG IBJJF weight class, 77KG ADCC to 76 & 82 KG IBJJF, and so on, and so forth.

Before you start, another little side-note:
We do understand there are caveats to this study. It is hard to do an Apples-to-Apples comparison in grappling as, realistically, the IBJJF and the ADCC World Championship continuously gather the cream of the crop of jiu-jitsu. The athletes who compete in these two tournaments need to go through trials or have gained prestige at the highest level. The EBI Invitational, on the other hand, did not produce the same level of talent across its brackets, often pairing average grapplers with world-class stars. This did raise the entertainment value of the production, but, invariably, gave slightly skewed results for the purposes of this essay.

There is also the fact that ADCC matches run for longer, on average, with overtime rounds and extended matches during finals and semi-finals, therefore, more time to score positional exchanges. Nevertheless, we believe this will give us and you a good idea of each ruleset. Follow our findings below.

As we expected, this was one of the biggest changes from our previous ruleset study. Where in 2015, the data showed zero takedowns under the EBI ruleset, digging deeper in a wider range of matches and weight classes proved there was a slight improvement to that overall ratio, from 0 to 0.13 (13%), meaning 17 takedowns out of 128 matches.

One could say EBI’s takedown numbers were not overwhelming, but neither were the IBJJF World Championships’, with only 17% of matches seeing a takedown (0.17 ratio in the matches observed), a far cry from the ADCC’s 0.38 ratio average (52 takedowns to 136 matches). 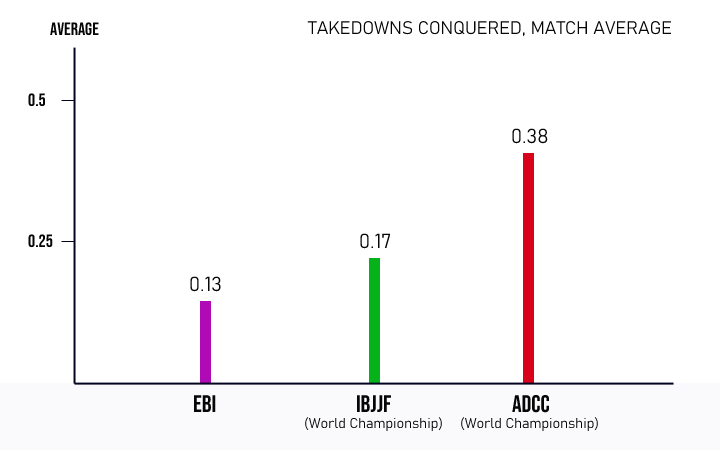 The ADCC proves here, that it is one of the few submission-grappling rulesets that continues to push its challengers towards a more complete game. It is nearly impossible for an ADCC champ to be a layman in the takedown department, in fact, from all its champions in the weight classes observed for the purpose of this essay, only Rubens Charles was able to conquer an ADCC title without scoring one single takedown in the tournament, which happened back in 2017.

According to the data, and much like demonstrated back in 2015, the IBJJF truly caters to a sweeping game. The guard as a tool to improve positioning. The other useful purpose of the guard, the finish, proved to be not as fruitful under this ruleset, albeit, the guard was the #2 most used position to finish in the Mundial, behind back control.

The uniqueness of the submission-only ruleset often saw the top athlete fall back in pursuit of a leg entanglement, this way conceding the sweep. These sit-down attacks were not accounted for as sweeps in the graphic displayed below.

On the other hand, the IBJJF matches produced 59 sweeps from 50-50 guard out of a total of 191 reversals. This phenomenon of the 50-50 guard backward and forwards reversals is not seen in any of the other rulesets, which is likely down to both allowing heel-hooks, which make the use of this guard a vastly more dangerous experience. 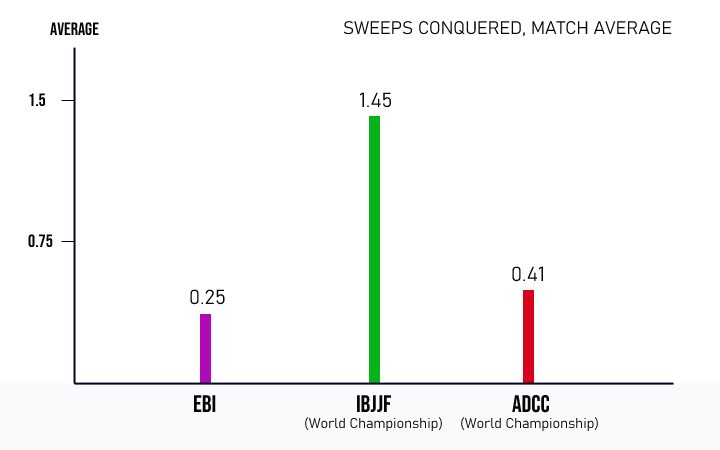 The conclusion here seems logical and in line with what each ruleset aspires to produce. In a points-based tournament, athletes will look to improve on positioning while remaining safe from the guard pass (more on that below), while in submission-only, athletes will not favor the sweep. In fact, often players would downright oppose to “improve” their positioning when an opportunity presented itself. this was particularly evident when observing guard players who prefer to submit from the bottom – in which instance a sweep would only place them outside their striking range and further away from the desired submission.

Interesting results here as both the IBJJF and the ADCC appear to have similar trends, where the heavier athletes will pass the guards at double the rate of the lighter weights. This same tendency is not seen in EBI, who have more homogeneous results. The lighter weights have always had the reputation of owning the toughest guards to pass, and this may be an indicator of this exceptional guard retention. 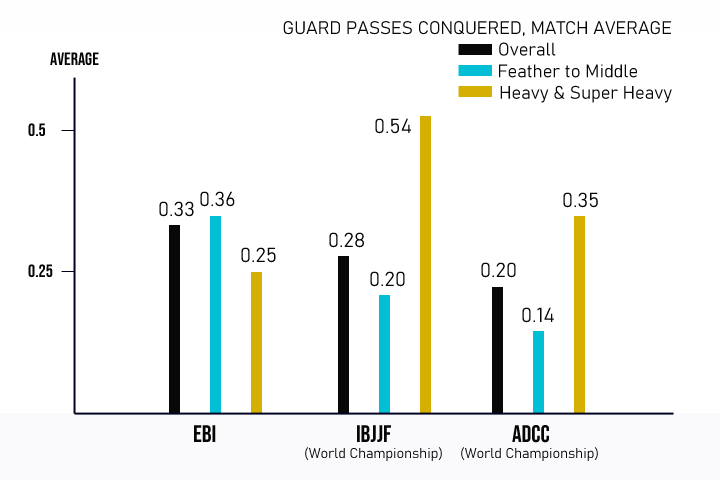 In this assessment, EBI shows the best overall ratio of guard passing. This is not accounting for the 6 times we recorded “planking” midway through a match, meaning, a guard player laying down and allowing the top player to pass/achieve side-control, possibly for entertainment purposes, (see image below). This practice was not observed in the other rulesets.

Arguably the two most important positions to conquer in a jiu-jitsu match. Once achieved, the mount and back controls are the ultimate displays of dominance and get the athlete closest to the finish. Interestingly, here, the ADCC is king. We believe there is a good reason for that. 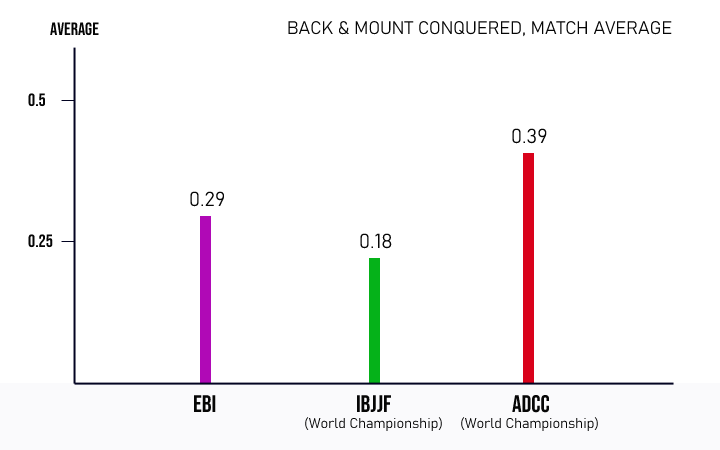 The ADCC ruleset is one of the hardest to score in, from all the points-based environments. Two reasons for this degree of difficulty spawn from the stand-up and guard passing guidelines. When taking an athlete down, the TKD will only score if the athlete’s back is flat on the mat, the same way that, when passing, a pass will only secure points if the athlete has his back flat on the mat. These rules results in plenty of “turtling” to avoid being scored on, this turtle position has proved to be a breeding ground for back takes, as 69% of all back-takes and mounts at the ADCC derived from this scenario.

This logic could also be said of the IBJJF, where the same rules stand, yet, it doesn’t apply there. Why? This, we believe, has to do with the smaller amount of takedowns and higher levels of guard pulls seen at the World Jiu-Jitsu Championships, which cancel the takedown > back take dynamics

Another interesting note to take away from this is how side-control played a much bigger role in EBI, under which rules we saw 14 instances of mount and back controls being achieved against solely 1 record of that same interaction in the ADCC.

Overall, it seems as though both the ADCC and the IBJJF produce more dynamic matches with higher numbers of positional exchanges in the parameters defined by takedowns, sweeps, guard-passes, back-takes, and mount-controls. 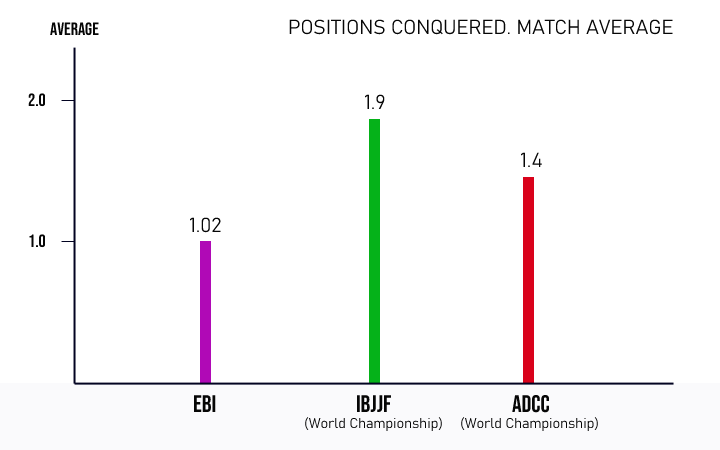 Although with smaller rates of meaningful positional exchanges, EBI did produce higher numbers of submissions (0.55 sub-ratio of matches observed), more than 10% over both the reviewed ADCC and IBJJF numbers.

Ultimately the numbers show that, even though the rulesets do not change the game completely, they certainly appear to shape it and produce different dynamics. EBI macro-exchanges for leg-locking entanglements, IBJJF more guard-centric, and the ADCC with a well-rounded approach.