One of the points of interest of the European Jiu-Jitsu Open produced by the International Brazilian Jiu-Jitsu Federation (IBJJF) at the beginning of each year is this tournament’s ability to bring together one of the biggest concentration of nationalities from all across the globe. From China to the United States, the world’s top athletes go to war at this event, an occurrence that is likely supported by the championship’s location (Lisbon, Portugal), which makes it easier for Asians, Middle-Easterns, Europeans, and to an extent, South Americans to commute.

We had alluded to the numbers brought forth by the Euros in a previous segment “Who Brought The Biggest Army“, where we displayed the most represented countries at this tournament, which gathered nearly 5000 competitors. Today, In this here piece, we bring you the countries who medalled the most this year in the adult divisions, from blue to black belt.

Unsurprisingly, Brazil — who brought over 4x more competitors to the event than any other nation — dominated the numbers of podium placers in a big way. That dominance is, however, severely diminished when we look at the female divisions, where things were much more balanced. Full report below.

COUNTRIES WITH MOST MEDALS AT EUROS

In our first image (below), we see the top 5 countries with most medals:

As previously explained, Brazil brought the biggest army to the tournament and consequentially brought home the most medals. It is worth noticing that not all these athletes train in Brazil, many of the competitors in this South American squad train in the United States, Europe or even Middle Eastern countries such as Qatar. The Qatar Pro Team brought quite a few competitors (25) to the European Open and reaped great results, with 11 medals, 5 of those being gold.

Another interesting aspect of the chart above is the consistency in the numbers. Most countries had a very similar range of medals across all belt levels, with the exception of the USA, who produced better results in the pro-divisions (brown and black).

The female division is where we see the shortest distance between the 37 medalling countries, with Brazil’s dominance substantially diminished. Altogether, 16 different countries achieved gold medals in this category, with the image below displaying the top 5 from that list. 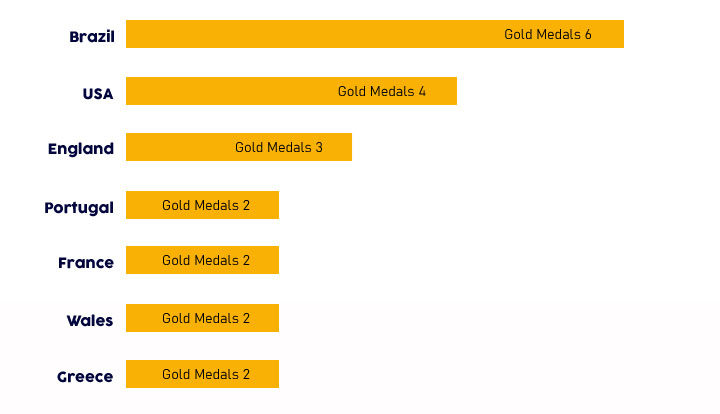 On this list of gold medals are unexpected countries such as Kazakhstan and Vietnam. Signs that the sport’s reach is very likely expanding in those countries. A fantastic indicator of jiu-jitsu’s health as a worldwide sport.

With 77.5% of golds going to Brazil, it is worth referencing that, even though they did not conquer the top of the podium, countries such as England, Portugal, Norway, and Russia did have strong performances here, as did the #2 force in the BJJ world – the USA.