The Ezekiel Choke ,or Estrangulamento de Ezequiel (in Portuguese) or even Sode Guruma Jime (in Japanese) is a common submission utilized by grapplers in which the attacker uses his own gi/kimono sleeve as leverage to choke his opponent. This choke hold combines the use of the aggressor’s sleeve and the wrist, in a scissoring motion that blocks the opponent’s trachea and/or the carotid arteries. The choke became highly popular in the sport of Brazilian jiu jitsu during the 1990’s as it is one of the few chokes/attacks that a top fighter can safely attempt from inside the guard of his opponent. The Ezekiel choke has many variations, being the “arm in Ezekiel” one of it’s most commonly seen in high level competition.

The name: Ezekiel Choke
The name of this choke hold comes from a famous Brazilian judo olympian by the name of Ezequiel Paraguassú, who in 1988 decided to tighten up his ground work (newaza) ahead of the Seoul Olympics at the Carlson Gracie Academy. Paraguassú’s masterful control of this technique earned him the honour of having the choke named after him by the jiu jitsu community.

The History of the Ezekiel Choke 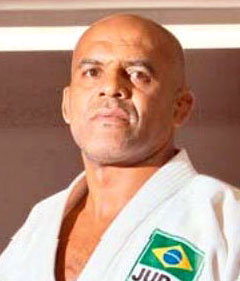 It is a common misconception that the judoka, Ezequiel Paraguassú created this choke, in reality the Sode Guruma Jime, as it is called in Japanese – meaning sleeve wheel constriction, already existed in Judo long before Ezequiel passed it on to his training partners at the Carlson Gracie academy who were not aware of this technique. The origins of the choke are unclear and may go well before the creation of Judo or the Kodokan Institute.

What made this choke highly popular in jiu jitsu were the set of rules applied in the Brazilian Grappling style. While in Judo, there is a limiting amount of time to work an opponent into a submission hold, in jiu jitsu the longer period allowed to spent on the ground set the perfect environment for this position to thrive.

Another important aspect that set the Ezekiel choke’s success in the BJJ competitive scene was the fact that the standard Ezekiel Choke can be applied from inside the guard with minimal chances of the bottom grappler of setting up an attack, this low risk choke fit well against the popular closed guards of the early 1990’s and heavy set guard passers.

Since it’s initial success in jiu jitsu the Ezekiel choke has evolved and it’s variation, the arm in Ezekiel became one of the most common chokes in modern day BJJ. The Ezekiel choke is not exclusively done with the sleeve, as it has a no gi variation using solely the wrists for leverage.

Ezequiel Paraguassú left Brazil and moved to Switzerland, shortly after his stint training at the Carlson Gracie headquarters, where he lived for many years completely unaware that the choke had become highly popular in the sport of Brazilian jiu jitsu, nor that it bore his name. It was only upon his return to Brazil, 19 years later, that he heard a coach yell to his student “do the Ezekiel choke”, at a BJJ tournament for the first time and found of the success it had in competition.