The match we have all been waiting for may very well become a reality at this year’s ADCC World Championships, that of ADCC Champions Gordon Ryan and Felipe “Preguiça” Pena. The two athletes have been in a battle of words on social media since 2016, and have met competitively twice during that period with Pena coming off victorious on both occasions. The last time these two grapplers met was in the final of the ADCC open weight class, back in 2017, a time when Gordon competed at 88-kilograms and Pena at 99.

HOW THE ADCC WORKS

First thing’s first. For those who are not familiar with the ADCC’s way of operating, there are different titles on the line at the ADCC World Championships. The different weight class titles, of course (in men, from 66 kilograms to +99 kilograms), then there is the open weight tournament and then the super-fight open weight main event with the bigger cash prize. The open-weight tournament is used to select the challenger for the following year’s main event.

Although Ryan is the current open-weight tournament champ (2019) and is scheduled to compete in the super fight main event against André Galvão for the absolute trophy, he has also been allowed to compete in the regular tournament (weight & absolute) at his request, the first time a reigning champion makes such an appeal to compete for all three available titles.

Pena and Ryan have both won the ADCC 99-kilogram division, Felipe in 2017, and Gordon in 2019. Therefore, when fans heard the news of Ryan competing in the tournament, many were jumping for joy at the thought of these two icons meeting for a Round 3 showdown in Las Vegas come September.

When the news came that Gordon had opted to compete in the 99-plus kilogram division, many were disappointed as it meant the much-anticipated clash with Preguiça would no longer happen but cry no more grappling fans, your prayers have been answered!

After Ryan’s new weight class was revealed, Pena aggressively campaigned to go up in weight class as well, in chase of another clash with Gordon. Despite the logistic issues and unprecedented ramifications, such a move would have on the weight class’s bracket seeding, the nod has officially been given and the two will be competing for the +99 kilogram title.

WHEN WILL THE TWO MEET?

At the moment, the ADCC management has been very clear in saying that both Gordon and Pena will be the top seeds of the weight class and therefore will only meet if they advance through to the final. Since Kaynan Duarte, the current +99kg champion, will be dropping to-99, expect silver medal Nick Rodriguez to also be on that top seeding mix.

So far the 99+ Weight Class has these names confirmed:

Below are the stats of the past two matches between Pena and Ryan. It is worthy of note that Gordon was the lighter of the two coming into their previous clashes, both in December 2016 and in September 2017. The New Jersey native has since gained a substantial amount of size making this a much more leveled match in that regard. 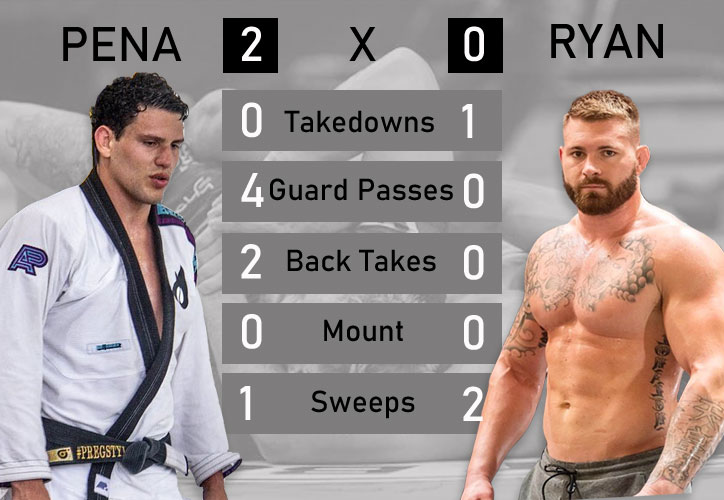 What say you, are you excited about this potential clash?