Are Steroids a Necessary Evil in Grappling?

BJJ Heroes,
16.37K 0
Are Steroids a Necessary Evil in Grappling?

There is a big elephant in the room that is not nearly as discussed as it should, and that is the institutionalized use of steroids and other “heavy” performance-enhancing drugs (PEDs) such as peptides in the sport of grappling. A good example of this was in clear sight at the ADCC World Championship this year, where a very large number of competitors looked like real-life action figures, some openly stating they gained 8-12 kilos (26 lbs) of lean muscle for the tournament – a highly unlikely outcome for a “clean” athlete when undergoing a multiple week-long intensive training camp.

Now, the use of steroids in our sport is nothing new, but there is definitely a shift in discourse regarding PEDs, an openness of sorts backed by public figures, including the president of a major professional grappling event publicly showing his support for the consumption of steroids or one of our main sporting stars using his social media platform to openly mock another athlete, deeming him “out of shape” even though they looked clearly in shape for a clean athlete.

These are their personal views, and the intent of this article is certainly not to throw stones at them or anyone else for that matter. This is meant to be a summary of our own concerns regarding the practice of hormonal enhancement in our sport.

Go Directly To Your Desired Topic:

HOW STEROIDS AFFECT A SPORT’S GROWTH

Right now the jiu-jitsu industry is very small when comparing to mainstream sports, with much of jiu-jitsu’s buzz falling on the shoulders of athletes such as Gordon Ryan, who does an outstanding job at, not only winning matches but also at keeping people interested in what he has to say or show. Although with a decent amount of hate thrown at him in the process, Ryan is head and shoulders above any other jiu-jitsu competitor in name/brand value.

In order for a sport to look for broader acceptance, having big stars is an incredible asset, however, in order to achieve this end goal, other important angles need to be covered and a clean sport is almost equally important.

There is a reason why the UFC pushed so strongly to clean its brand by joining forces with USADA for one of the strictest PED testing programs the world has ever seen. Many believed performances would suffer from this initiative, but they truly haven’t. It was a genius strategy, without which the WME–IMG 4.025 billion dollars sale would have never seen the light of day, nor would the UFC have been able to compete with any globally-accepted, world-class sport out there, with the likes of soccer or the Olympics.

Credibility needs to be in place for a physical activity to be considered a legitimate, professional sport. One that may one day be on free-to-air TV and bring forth the interest of multinational labels who can pay athletes what they deserve. Large brands traditionally do not choose to attach their image to controversial products and having a “dirty” sport certainly makes things harder in that sense. If the jiu-jitsu aspires to grow out of its current niche market, cleaning the sport is one of the problems that require tackling.

So far the International Brazilian Jiu-Jitsu Federation (IBJJF) is the only grappling promotion who realized the issue and is taking their first steps, albeit timidly, in the right direction. More recently the United Kingdom Brazilian Jiu-Jitsu Association (UKBJJA) has also decided to introduce testing to their events.

IS PED USAGE ETHICAL/MORAL IN SPORTS?

Ethics and morality are two different things. Ethics refer to rules provided by an external source, e.g. a grappling event with a code of conduct, while morals are an individual’s own principles regarding right and wrong. Morality is not an easy subject to pin down. What is acceptable behavior in one segment of society might not be in the next.

In a sporting environment, every competitor is working to improve himself mentally, technically and physically, and without a shadow of a doubt, when done right, PEDs will give an athlete incredible short term benefits and place an athlete truly ahead of the curve. Considering that most tournaments do not have a banned substance list on their code of ethics, it is only right to assume that no ethical boundaries have been breached, aside from an informal moral standard followed by a handful of high-end athletes.

There is, however, the IBJJF who follow USADA’s own list of banned substances. If a competitor agrees to compete under this promotion and chooses to use steroids, testosterone, peptides or whatever else is on those guidelines, then we can safely say that the athlete is cheating on the rules he agreed to abide by. To use that old rhetoric where “everyone else is using it so I’m not cheating when I do” is not at all a coherent understanding of the situation. To use a very straight forward comparison, if all your neighbors are bank robbers and haven’t been caught, that wouldn’t mean that you too can rob a bank. You would still be a thief.

WHY ARE PEDs BANNED FROM SPORTS?

The baseline argument for the ban on PEDs is a belief in fair play in sports. Meaning, not giving the upper-hand to one athlete who, when using a banned substance, will have a physical and sometimes mental advantage over his or her clean opponent(s). The arguments against the ban usually tend to be something along these lines:

– Cheaters will always cheat, so every enhancement drug should be allowed.

– If PED users are persecuted, athletes with a strong financial backing will keep using steroids but, using their wealth will fund scientific research to cheat the system, while poorer competitors will be forced to stop using. Thus – advantage to the wealthy class.

The counter-argument for these is that by removing any sort of tracking and penalizing measures for cheaters, one would almost completely eradicate any clean athletes from the sport, who would have even fewer chances of competing against an unhinged and fully “cocktailed” competitor. By tracking users there is, at least in theory, a semblance of accountability. Using the IBJJF example, and even though the testing done by the IBJJF is in its infancy, the tendency here is to keep pushing for stricter and more regular testing in the future.

But why would any competitor choose not to use PEDs? 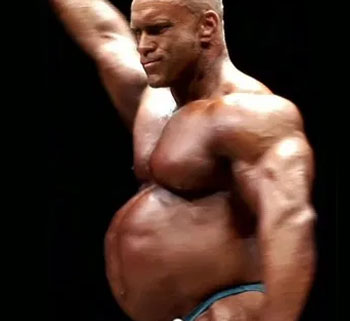 Bloated belly, sign of increased organs, one of the longterm side-effects of HGH

Long story short, no. Most studies point to anabolic steroid users having as much as a three-time higher risk of premature death (source). In the case of human growth hormone (HGH), death rates are not as well studied, however, depending on dosages and long term use, the drug can grow the user’s internal organs which may lead to an enlarged heart and other possibly fatal issues such as faster development of cancerous cells.

In jiu-jitsu, the most common “hard-core” PEDs are testosterone, estrogen-based anabolic steroids, and peptides – most common of which is the human growth hormone, all of which have a plethora of side-effects. Often all combined in a cocktail cycled throughout the year, some can be used year-round, such as HGH for a slower, yet more permanent, effect in the user’s body.

Granted, not everyone suffers from the ailments outlined above, it is, however, a risk athletes take when using these drugs.

The idea that a young competitor, in his 20s, requires a hard hormonal treatment to grapple is not a realistic one. Athletes do it to gain an endurance/strength/ edge, to recover from injuries, to recover faster or even for vanity purposes and PEDs are indeed effective at tackling these issues. However, they are not necessary, and here’s why:

The UFC has had one of the most stringent PEDs testing programs in the world, and the results are in plain sight. The days of Sean Sherk and “horse meat” Alistair Overeem are long gone and the fights are not any less exciting than they were. We could say that some of the best matches the sport has ever seen have come out of new era athletes like Justin Gaethje, Khabib Nurmagomedov, Israel “The Last Stylebender” Adesanya, Kelvin Gastelum are at the forefront of combat sports entertainment and, as far as anyone can tell, they are clean.

If you remove the UFC from the equation and focus on other grappling sports akin to jiu-jitsu, such as judo, we see the same outcome. European judoka federations (the reality we know) have consistently drug testers present at international events and will test a random selection of medallists. In national team camps, random tests do take place also, while if an athlete is on the Olympic team he is subjected to even stricter and more frequent random and post-competition testing. These athletes still perform worldwide.

Doping is a great health risk, arguably not as dangerous as media tends to portray it, but still a very noticeable impact on an adult’s health and longevity. If someone is using, everyone else just has to use to stay competitive. Combat sports athletes are expected to take risks, their whole career is an assault on the body, however, when an athlete chooses to take PEDs, particularly harder substances, he is adding another layer of risk which may deeply diminish his quality of life in old age or outright shorten his lifespan. To “open the gates” of drug use in sports, meaning, removing the ethical component, will invariably force clean athletes to become users or render themselves obsolete and, expect to have current users doubling down on their resources. As we speak, in BJJ, clean athletes still exist.

Adding to the ethics issue, and the, arguably, moral inequality towards clean athletes, blatant abuse of hormonal treatment by athletes will likely stifle jiu-jitsu’s growth in the long-run, given that few to no major multinational sports brands will invest in a “dirty” sport. Jiu-jitsu has outgrown the bad-boy/thug image that haunted this martial art in the 1990s, it may be time for us to start gearing up for a cleaner and healthier look in the sport’s world. These are, of course, the ramblings of a fan, and should be taken for what they’re worth.