BJJ Heroes,
1.91K 0
Top Finishers Of All Time In The ADCC

There is plenty of debate regarding who is the GOAT of submission-grappling. Obviously, the term “GOAT” (Greatest Of All Time) means different things to different people as greatness is a noun and standards differ greatly in a multi-faceted society such as ours.

The easiest method to define one’s greatness in a sporting context is to take into account an athlete’s trophies, but even this is subject to plenty of variables. Take football (soccer for the American audience) for example. Many fans would argue that Argentina’s Lionel Messi is the greatest footballer of all time, yet, he never won a FIFA World Cup and “only” scored 769 goals in his pro-career against Cristiano Ronaldo’s 815 or Pele’s 3x FIFA World Cups and 1281 goals. The world of jiu-jitsu and submission grappling is no different from any other sport in that regard.

When it comes to submission-grappling, the ADCC is very much the sport’s equivalent of the FIFA World Cup, and therefore it is with great interest that we address the issue of submissions in this great event. We have done this study not to close the door on the GOAT debate, which is and forever will be a fun point of discord among fans, but to feed a few more statistics into this interesting topic. So without further ado:

TOP FINISHERS OF ALL TIME IN THE ADCC

First a few of the ground rules of this study. For the ranking stated below, we have only accounted for former ADCC world champions for the reasons stated above (there is no GOAT without gold medals). We have also combined every single win across all weight classes in these sums, to deliver an average submission ratio in the ADCC World Championships. We have not accounted Trials events. 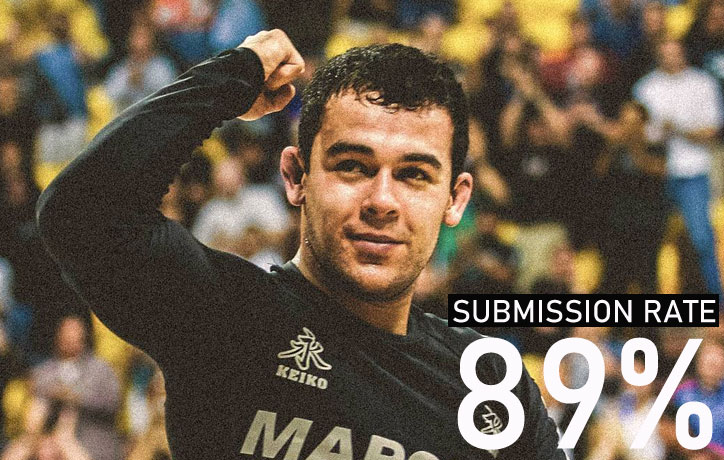 The one and only, Marcelo Garcia. Many would say (us included) that there is an era pre-Marcelo Garcia and post-Marcelo Garcia as the incredible Alliance star changed the game substantially by making the X and Single-X guards part of jiu-jitsu’s bread-and-butter repertoire, while also making the arm-drag to the back a part of most teams’ basic curriculum. In addition to all this, Marcelo also proved the power of the high-elbow guillotine, which many of us now call the Marcelotine.

This outstanding string of techniques was advertised during Garcia’s brilliant campaigns on the ADCC mats. He who conquered the event’s gold medal on 4 occasions, placing second (silver) twice. 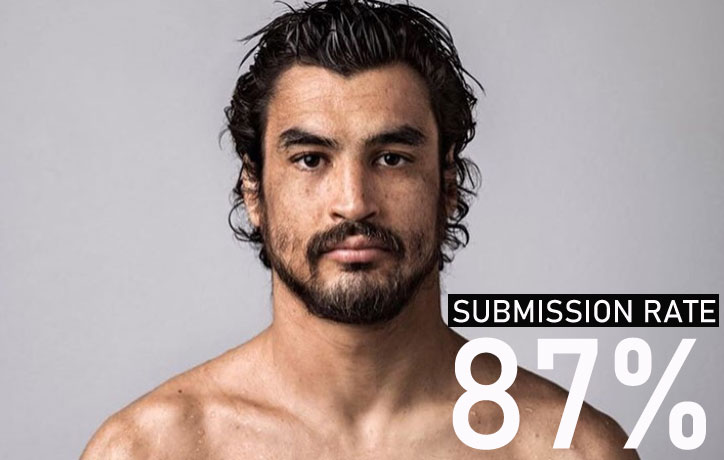 Another 77-kilo champion on the top 10 submission artists of the ADCC, and another athlete whose grappling style was a trademark of his. Kron Gracie, the son of the most influential jiu-jitsu personality of all time, Rickson Gracie, was a Back To Basics grappler who steered away from the new wave of black belts that was developing during the early 2010s with games heavily reliant on the Berimbolo, Inverted Guard, Leg-Drag, and 50-50 techniques. Gracie played more traditional jiu-jitsu positions and did so aggressively, always with the submission on his mind.

Sadly, Kron ended his competitive grappling career after his win at the 2013 ADCC World Championship, opting to pursue his destiny in mixed martial arts. 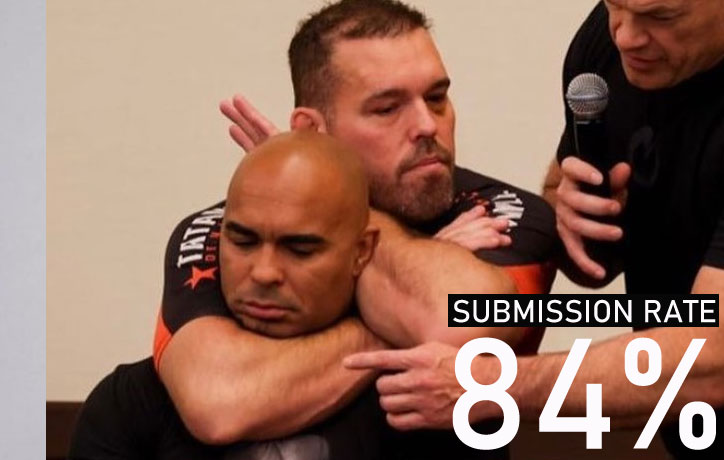 What are the odds of having 3 out of 3 athletes whose approach to grappling revolutionized the sport on an ADCC Top Submission Artists of All Time ranking? Most of you will know Dean Lister as the Godfather of the footlocking game, a technical acumen he used at the ADCC World Championships to submit legends of the sport such as Rodolfo Vieira, João Assis, João Gabriel Rocha, Alexandre Cacareco, and Saulo Ribeiro. 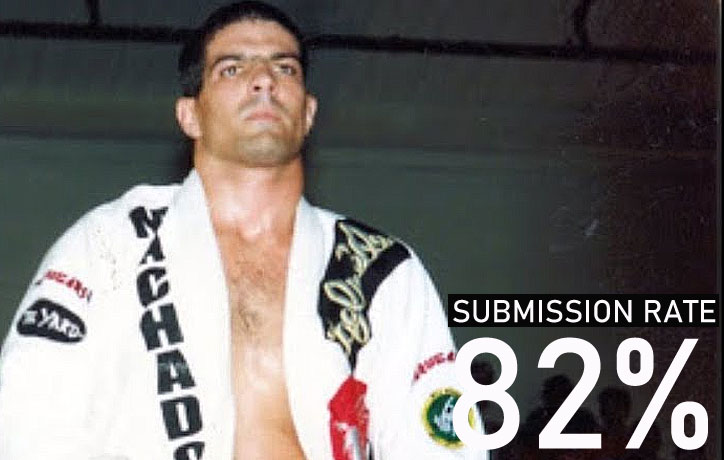 Arguably the very first big star of the ADCC was Jean Jacques Machado, the king of the Rear-Naked-Strangle, well-known not only for his superb butterfly guard but also for his classic white baggy t-shirt and black lycra shorts ensemble when competing in no-gi.

Prior to his historic performances at the ADCC, Machado had been one of the building blocks behind the outstanding Gracie Barra team of the late 1990s, he who had taught many of the squad’s main figures at the start of their grappling journey. Machado moved to the United States during his athletic prime and, for that reason, never got to earn the same recognition with the gi, at the IBJJF World Championships (an event produced in Rio de Janeiro at the time), as he did in no-gi. Jean-Jacque also has constriction ring syndrome (CRS) in his left hand, a disorder that was less of a disadvantage in no-gi, when compared with the kimono. 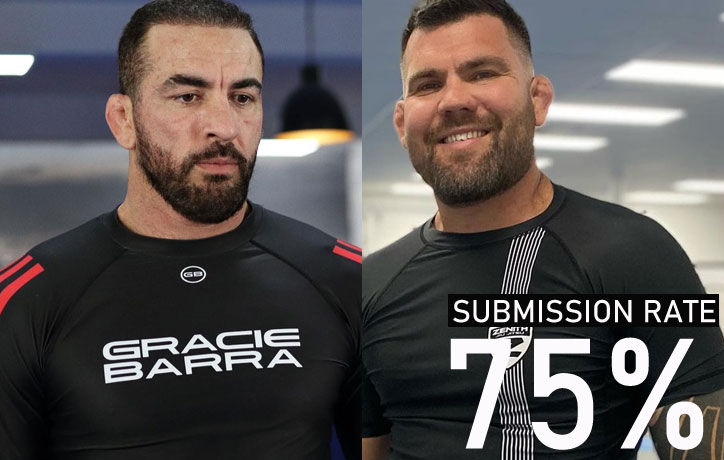 BRAULIO: Another historic figure of the sport, Braulio was the first under 88-kilo athlete to break through the absolute division, a category he won in 2009 with one of the best double gold runs of the ADCC at 6 submissions out of 8 matches, prior to him, only super-heavy and ultra-heavyweight athletes had conquered the open-weight gold medal.

This same 2009 tournament served as a launching pad for the now-famous Estima Lock with Braulio successfully applying the position on Rafael Lovato Junior at the semi-finals of the 88-KG weight class.

ROBERT: Although Robert’s competitive career focussed heavily on gi jiu-jitsu and not as much on the no-gi facet of the sport, whenever the American-Brazilian grappler shed off the gi, he made it count. Drysdale made 2 incursions on the ADCC tournament, taking a gold medal in 2007 in the open weight class where he submitted the legendary Marcelo Garcia, in the final, with a D’arce choke, while also taking a bronze medal in the 99-kilogram division with an RNC over Alexandre Cacareco. 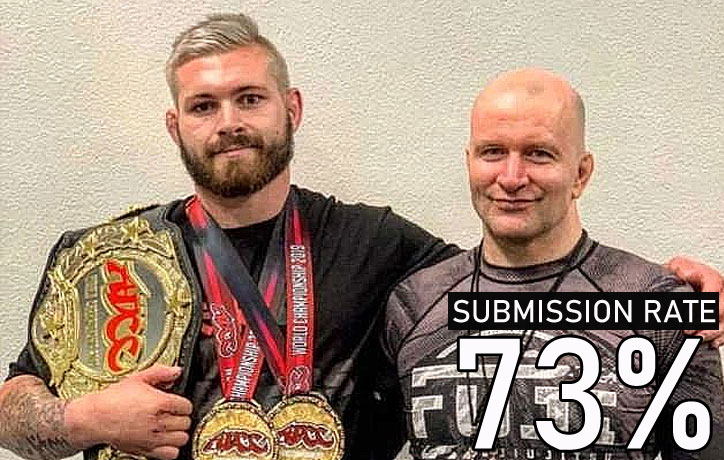 The most influential grappler of our time, Ryan’s rise to the top of the sport was cemented in 2017 through his outstanding run towards gold in the 88-kilogram division and silver in the open weight. He would return in 2019 with an improved double gold performance, this time as an under 99-kg athlete.

A point worthy of note in Gordon Ryan’s ADCC career thus far is the fact that his submission game has been more efficient in the open weight class, where John Danaher’s pupil has conquered an 86% sub-rate with 6 submissions out of 7 matches (only Buchecha survived Gordon’s finishing prowess) against 5 subs out of 8 matches in his weight class(es) at 62.5%.

This year Gordon is set to make history by competing once again at the World Championships of the ADCC (weight class and absolute) while also going up against André Galvão for the open-weight title super fight, the holy trinity of the ADCC, something never attempted in the past. 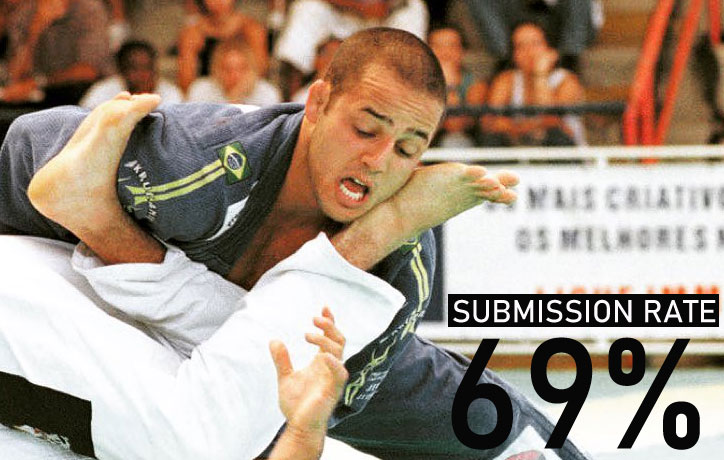 Alexandre de Freitas, commonly known by his nickname Soca is one of the unsung heroes of the featherweight division. A former student of Jean Jacques Machado, Soca shared the same efficiency in the butterfly guard and the same aggressive and submission-oriented game as his first instructor. A style he used to dominate the featherweight division prior to the reign of Royler Gracie. 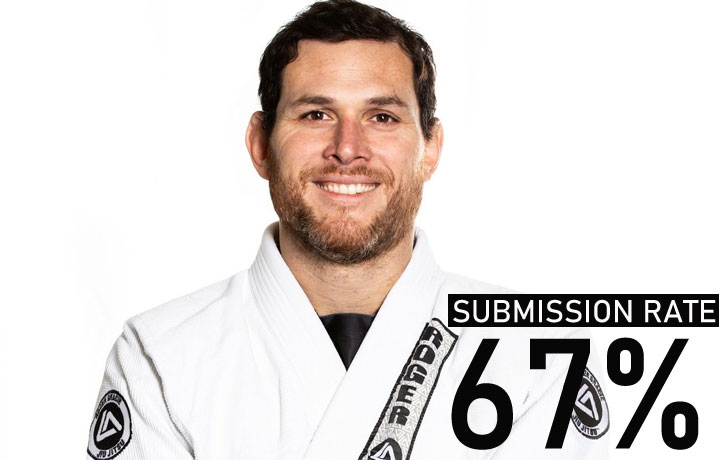 Many know Roger as All-Time King of Jiu-Jitsu with the gi, a reputation he earned through his 10 dominant performances at the IBJJF World Championships where he amassed 46 submissions and an 85% submission rate. Gracie did not compete as extensively without the gi, nevertheless, his 2005 ADCC run will forever be in the history books as the first double gold performance in the promotion where the winning athlete conquered 100% of his matches via submission, a groundbreaking feat that has never been equaled. 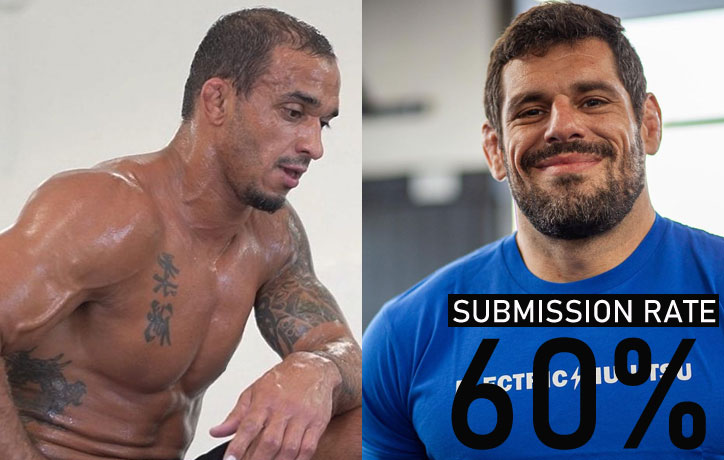 Two athletes of the same era, champions at the 2013 edition of the ADCC in China, Barral at 88-KG and Assis at 99-KG. Interestingly, both athletes had the same number of wins in the promotion (10) over the years and the same number of submissions, though João was more of a leg-lock hunter.

Among Romulo Barral’s most important submissions in the ADCC are his wins over Craig Jones, Chris Moriarty, and Kit Dale while João Assis had the bigger names on his submission repertoir such as Alexandre Ribeiro, Antônio Braga Neto, Leo Nogueira, and Jeff Monson. 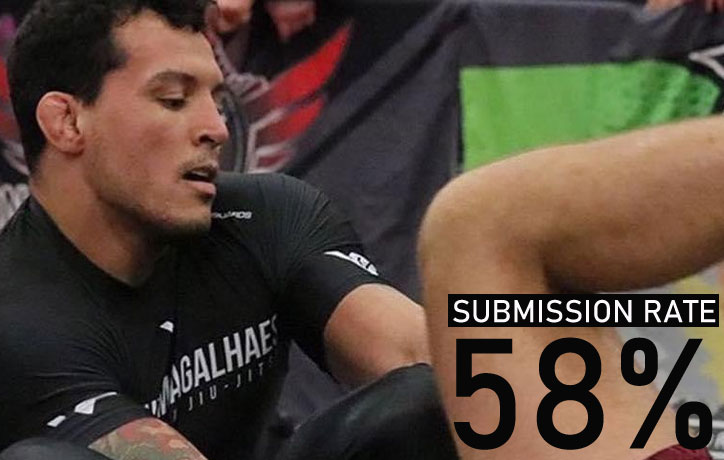 Over the decade-long run Vinny has had in the ADCC (2009-2019) the Brazilian talent took out, via submission, big names such as Márcio Cruz, Glover Teixeira, João Gabriel Rocha, Paul Ardila, Rodrigo Cavaca, and more.

TOP FINISHERS OF ALL TIME IN THE ADCC REMOVING OPEN WEIGHT

The submission rate rankings referenced above were built by amassing every single win across all weight classes, including the open weight. Naturally, the open-weight class brings many disadvantages to smaller athletes and even larger athletes who may – stylistically speaking – be less equipped to deal with the changing dynamics of the volatile absolute division.

Surprisingly, or maybe not so much, many of the Overall Top 10 list maintained their status, though their place in the rankings shifted. 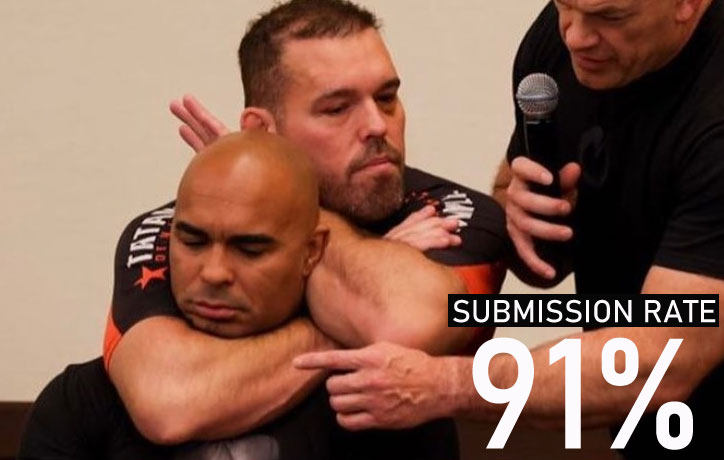 Simply jaw-dropping. In his weight class, the original Boogeyman, Dean Lister finished 10 out of his 11 matches. The lone survivor of Lister’s extensive kill-sheet was Augusto Ferrari in the first round of the 2011 tournament. 60% of Dean’s finishes came via heel-hook in the under 99 and over 99-kilogram divisions in which he competed during his active career in the ADCC. 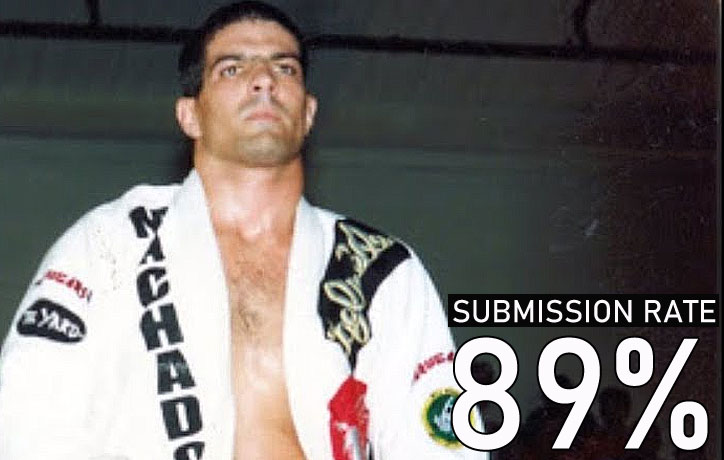 Much like Lister, only one athlete survived Machado without the heavy burden of being submitted, that person was Leozinho Vieira, in the 2000 semi-finals. 9 wins, 8 submissions, and 6 RNC’s in the 77-KG weight class was one of Jean Jacques’s legacies in the division.

No changes from his submission rate in the previous table as Kron only competed in the 77-KG division at the ADCC World Championships. 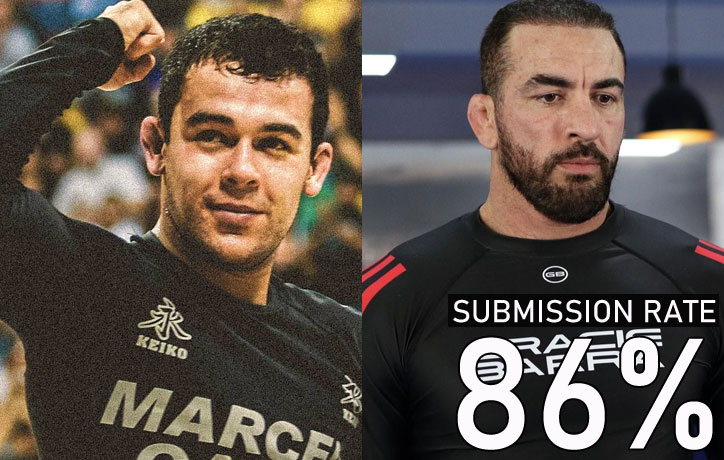 Another two athletes who were referenced in the listing above. Interesting here is the fact that Marcelo Garcia, a 77-kilogram athlete, increased his overall submission ratio when adding his open weight classes, a very curious stat considering that the only athlete he faced in the ABS division who was the same size as himself was Diego Sanchez. Everyone else Garcia faced in the open weight class was at least 20 kilograms heavier than himself and despite this incredible disadvantage, Marcelo scored a 100% submission ratio in the absolute. 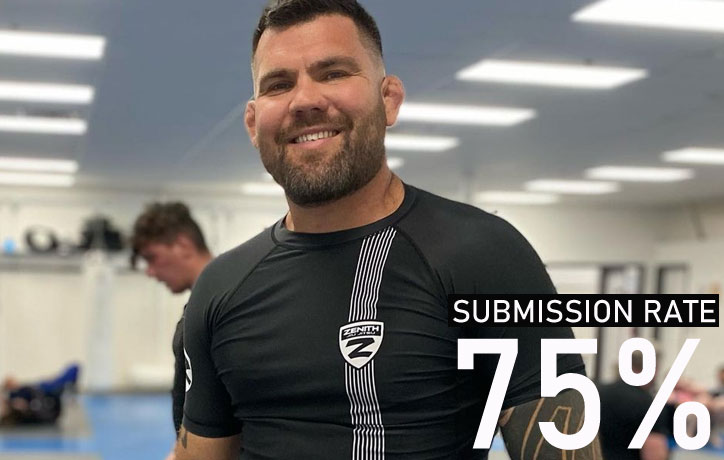 Despite never winning his weight class in the ADCC, Drysdale was one of the most submission-oriented grapplers the 99-kg division has seen during his 2-year span, competing in this weight class, with 75% submission ratio.

No changes from his submission rate in the previous table. Soca only competed in the 66-KG division at the ADCC World Championships. 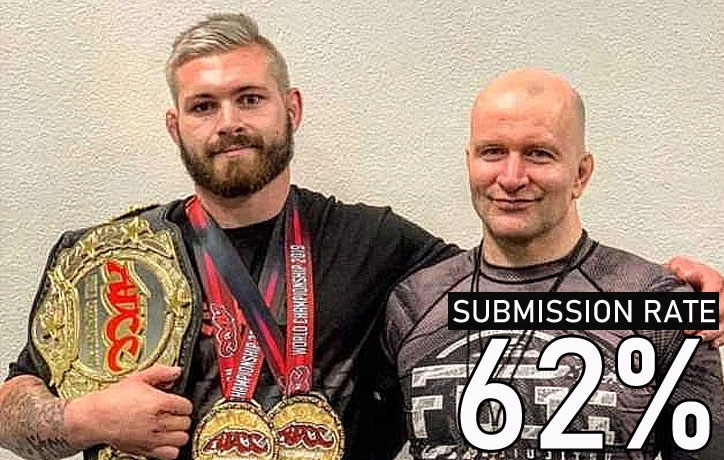 As referenced in the previous ranking, Ryan has done his best work while competing in the absolute division. Much of this lower ratio came down to his first run at ADCC gold (2017) in the 88-KG division which was not his most dominant performance on the big stage. Ryan’s 99-KG showing of 2019 was a big improvement with 3 submissions out of 4 matches.

Both athletes only competed once in the ADCC open weight class and neither passed the first round, therefore, their average remained the same when removing absolute matches. 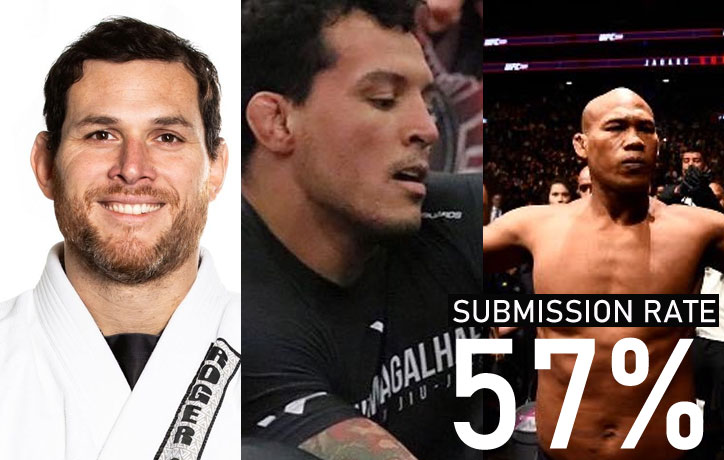 The first new addition to the list is Ronaldo Souza, the Jacaré, one of the most exciting grapplers to have ever graced a jiu-jitsu mat. Jaca won the 88-kilo division back in 2005 and placed second in the open-weight that same year, prior to moving on to have a successful career in MMA. Alongside Ronaldo are the aforementioned Roger Gracie and Vinny Magalhães. 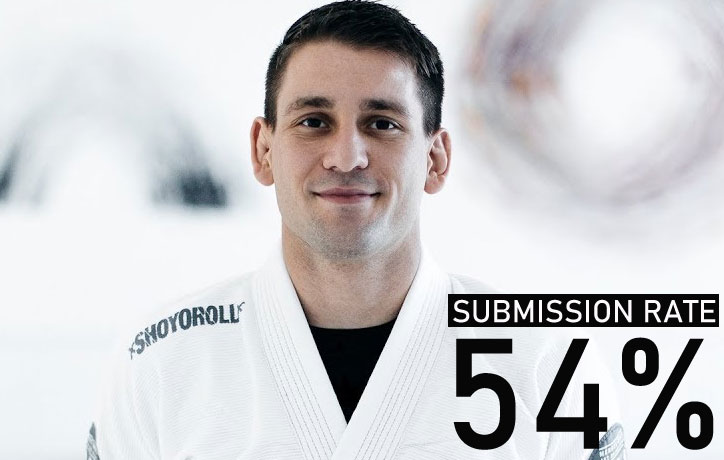 One of the legends of the featherweight division, Rafael Mendes was, arguably, the most dominant featherweight of all time, a reign that spanned across gi and no-gi facets of the sport. Among Mendes’ most important finishes are his submissions over Leozinho Vieira and Justin Rader (2x).

– The Importance Of Heel Hooks In The ADCC Ruleset (link)

– The Importance Of Wrestling In The ADCC Ruleset (link)