After a short hiatus from running the stats of the International Brazilian Jiu-Jitsu Federation (IBJJF) World Championships, we return to our Crunching Numbers report. This time to address the 2022 edition of jiu-jitsu’s most prestigious gi tournament, having studied 190 matches of the event’s male adult black belt division, a number of fights that ranks it as the #2 Mundial in relation to most male black belt clashes of all time behind the 204 bouts of 2017. Below is a run down of the dynamics of the tournament in relation to the action that took place at the Walter Pyramid venue on June 04 and 05 of 2022.

The numbers displayed below are BJJ Heroes’ recordings of instances verified by the IBJJF referees addressing the mats, meaning that a back take is only registered if the referee signals the table for points, a rule we applied for any point or submission here displayed.

As far as basic instances/occurrences go, the sweep is still the reigning king of the IBJJF ruleset, a trend verified pretty much in every single big gi event organized by the well-known promotion, showing that jiu-jitsu players still favor the bottom game despite our 1089 match case study on Guard Passing (read here) having shown that securing a guard pass is the clearest indicator of victory with a 99.6% correlation with the “W” against a 64% of Sweeping.

As explained above, Guard Passing is undoubtedly one of the most definite paths to victory in a jiu-jitsu match. This much was proven once more with nearly 100% of successful guard passers having their hands raised at the end of their match at the 2022 World Championships. The only outlier here is Igor Schneider who passed Wallace Costa‘s guard but still lost, though there is a caveat in this instance as Costa also passed the guard of Schneider during their clash making this a null match when addressing a guard pass’s correlation to victory.

With the development of wrestling up style sweeps, berimbolos, and crab-rides, maintaining your legs secure should be one of the most important aspects of passing a guard successfully, a concept that is settling more with the new generation of passers. That said, the All-Mighty Knee-Cut is still the most dominant way to pass as demonstrated by this year’s overall passes utilized at the 2022 Mundial. 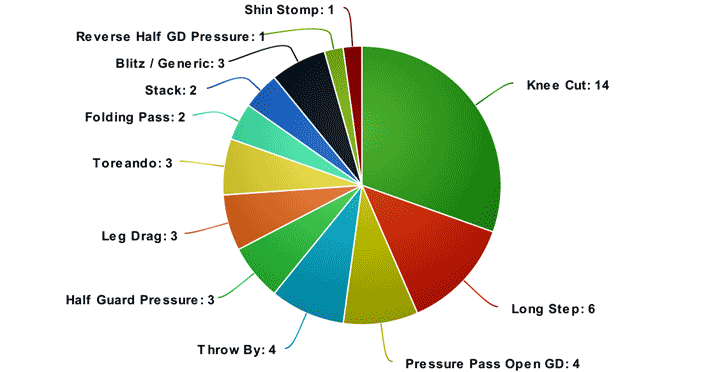 Despite the clear success of the Knee-Cut pass, it is still very much a high-risk/reward style of playing the jiu-jitsu game and if you do not have the balance of Lucas Lepri, the athleticism of Leandro Lo, or the scrambles of Isaque Bahiense, this could be the wrong solution to your passing game as shown by the 9 different athletes who were swept while attempting this maneuver against the 12 who managed to finish it successfully at the 2022 World Championship. We currently do not have the official numbers of advantages awarded due to near sweeps from knee-cut attempts but glancing through the data, that number is equally bleak.

The “Protect Your Legs” motto is not exclusive to the knee-cut. One of jiu-jitsu’s biggest trends is the standing pass, particularly with a lead leg. Here we see the same problem with 120 sweeps occurring from these dynamics that led to 5050, K-Guard, Single-X, Curu-Curu, and more. Guards we will address below in our Guard-Players paragraph.

At the IBJJF World Championships, we saw a total of 27 back takes. It is important to note that the numbers here displayed only account for back takes that received full points by the referees, there were an additional 7 which resulted in submissions but did not receive full points due to a tap or incomplete leg position.

When discussing the back takes, once again, being on top is the quickest road to success. Despite the countless berimbolo and crab-ride techniques being produced and played daily on social media, we witnessed only one (1) back take from Crab-Ride and one (1) from the Matrix position and a total of 5 successful back takes from the guard – 18.5% of all back takes recorded.

The range of back takes from a top position is varied, though attaking a pass amounted for 50% of all back takes conquered while 18.5% came from a counter-attack to a sweep. Another interesting stat is that – much like it happened with the guard-passing – every single athlete who conquered the 4 points off of the back take won his match. 100% success rate. 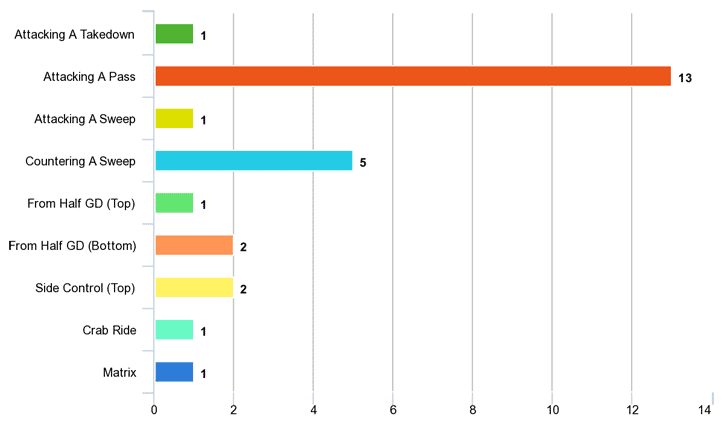 BACK AS A PATH TO THE SUBMISSION

Another way the back is an important piece of the grappling puzzle is in its connection with the most dominant submission in the sport, the choke from the back, submissions such as the slide-in choke, bow & arrow, RNC, short-choke, and more. This year, keeping with the tradition seen on every World Championships to this day, these were the dominant finishes of the tournament with 38% of all subs coming from back exposure.

IN GUARD WE TRUST

Having a strong top game does appear to be a favorable path to success according to the data. That said, we saw plenty of successful guard players at the IBJJF World Championships. Just by looking at the champions list, we have Erich Munis, Victor Hugo, Isaac Doederlein, and Nicholas Meregali, all exquisite guard players who rely heavily on their bottom games as their key to success.

With regards to the most common use of the guard, the sweep, from the 252 reversals observed, the vast majority of those came from leg-control dynamics, meaning, the guard player controlled one or both legs to achieve the sweep. More precisely 60.5% of sweeps, with another 23% coming from generic positions and circumstances such as athletes pulling the bottom player to guard, and other idiosyncrasies, leaving a mere 16.5% of sweeps from upper body-gripping attacks.

The guard positions used to conquer these 252 sweeping reversals are also varied. Below is a graph with all the guards used to set up the aforementioned sweeps. 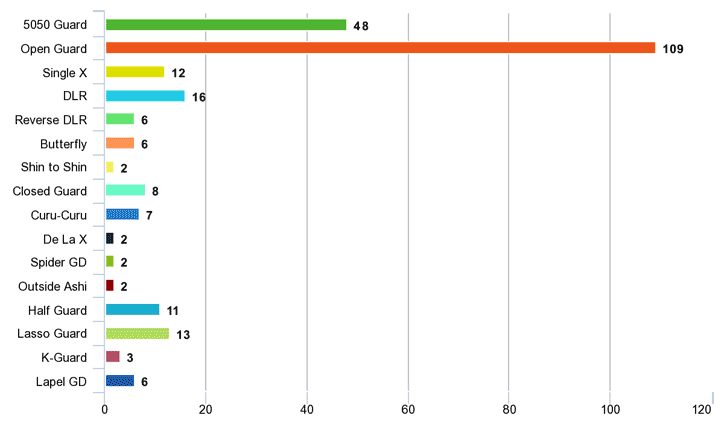 The importance of the guard is also evident in the all-mighty and match-ending submission game as 49% of the submissions recorded by BJJ Heroes at the 2022 IBJJF World Championships did come, indeed from the bottom player.

SUBMISSIONS AT THE WORLD CHAMPIONSHIPS

Although there is plenty more to jiu-jitsu than submissions, this is indeed what the average fan is seeking to watch in a grappling match and therefore, plenty of stock is placed on the match-ending submission. Although the numbers of subs this year were nothing to brag about, they were also very adequate for a tournament of this scale where athletes are very evenly matched.

Overall, this 2022 event saw 35% of its matches ending in finishes, a stark contrast with the numbers seen at the Brazilian Nationals just a few months ago, which generated 47% submissions. Historically speaking, however, these numbers were perfectly in line with past World Championships. Below is a short sample of the numbers reported during the past few years.

SUBMISSIONS PERCENTAGES OF THE PAST 5 YEARS OF THE MUNDIAL

As addressed in a previous paragraph, the dominant submissions continue to derive from back control with positions such as the Slide-Choke & Bow And Arrow (check the difference between the two here) as well as the RNC. This is the same dominant submission we had seen in all Mundial tournaments since we started reporting these stats back in 2015.

With the submission report, we wrap up our 2022 World Championships stats report. If there is any other stats-related topic you would like BJJ Heroes to address, leave us a comment below.