Bow and Arrow + Standard Choke from Back

The Bow and Arrow Choke as well as the Standard Collar Choke From the Back are two important grappling positions, common to Judo and Brazilian Jiu Jitsu, where the attacker will use his opponent’s lapel to achieve the submission, this way ending the match. Both positions are usually achieved from back control, though it is not imperative for the control to be secured in order to apply either of the chokes. Although often amalgamated into one single terminology the Bow and Arrow and Standard Collar Chokes both serve different mechanical and aesthetic designs. 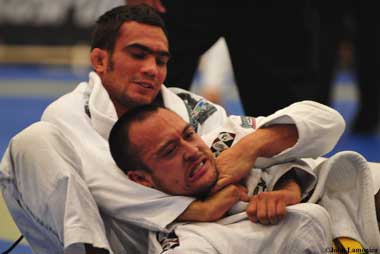 Standard Collar Choke From the Back, commonly known as Sliding Collar Choke, Collar and Lapel Choke or Cross Collar Choke From the Back, is the most common submission finish in modern day (gi) jiu jitsu, one in which the attacker will grab both collars of his opponent, from a back control situation (i.e. right forearm under the opponent’s chin with the hand grabbing his left side collar and left arm under the armpit controlling the right side lapel, applying force in a crossing motion).

THE BOW AND ARROW CHOKE 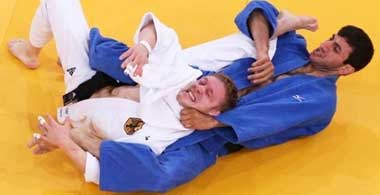 The Bow and Arrow Choke, also known as the ‘Berimbau’ choke (in Portuguese/Brazilian) is another highly effective choking technique which relies on the attacker grabbing one of his opponent’s collars from a back control type situation and the free arm controlling the closest leg (i.e. left hand under the opponent’s chin with a grip on his right side collar and opposite arm grabbing opponent’s right leg).

Although we could not establish the origin of the name in our research, the designation clearly relates to the angle between both grapplers as well as the bend in the body of the athlete being submitted when the position occurs – which resembles that of an bow in relation with the arrow, before getting propelled into its target.

Both chokes represented in this article are often named “bow and arrow” possibly due to their Judo origins, in which both the Sliding Collar Choke and the Bow and Arrow Choke are named Okuri-Eri-Jime according to the Shime-Waza list of the Kodokan. Okuri-Eri-Jime literally meaning “sliding lapel strangle”.

ORIGINS OF COLLAR BACK CHOKE IN BJJ

Both these techniques were part of the Kodokan The Okuri-Eri-Jime is also a terminology used for the Clock Choke, Crucifix Choke and even in some instances the famous “Rodado” (Loop Choke). Choking with the lapel while controlling an arm or a leg has also been mentioned as Kuzure Okuri Eri Jime by a few experts, meaning “variation of sliding lapel strangle” (source: Bruno Schindler, researcher for Kosen Judo).

None of the two collar chokes represented in this article originated in Brazilian jiu jitsu, having derived from Judo and its Shime-Waza (choking techniques) listed positions. It is unlikely that these positions originated in Judo though they were popularized inside Japan’s martial arts lineage tree.

Over the past few years, with jiu jitsu growing into a broader audience around the globe, the martial art witnessed a growth in its popular culture. This growth was embraced and propelled by several artists from different artistic backgrounds such as graffiti, comics, photography, painting and illustration.

Possibly due to it’s visual potential, the Bow and Arrow has been one of jiu jitsu’s most popular images. One of the images mostly associated with the choke is Meerkatsu’s “Bow and Arrow” (here) design, produced by the talented Seymour Yang for a charity event named Bristol Grapplethon in 2014. The drawing was later adapted on to a clothing item.

CHOKE FROM BACK VIDEOS

Standard Collar Choke From Back Applied by Rafael Mendes