Jesseray Childrey, I Enjoy The Finality of Sub Only

BJJ Heroes,
4.42K 0
Jesseray Childrey, I Enjoy The Finality of Sub Only

Over the years the ultra-heavyweight division has not been a synonym of flair or technical finesse, nevertheless, special athletes do occur as is the case of Kentucky asset and submission-only specialist, Jesseray Childrey. An athlete who combines a great physical presence with top-notch skill.

Originally from California, Jesseray moved to KY after his freshman year of high school where he found his love for interscholastic sports, particularly wrestling, playing in the National Association of Intercollegiate Athletics (NAIA) for Lindsey HS, while also adding football and track to his yearly activities.

After he ended his school cycle, Jesseray still had a passion for competition, and being a fighter at heart he decided to try mixed martial arts (MMA). “I didn’t want to be done physically competing after high school and College“, Childrey told BJJ Heroes in an interview taken in August 2020. “I was always told I should fight, so I decided to give it a try.” It was through MMA that the, then 20-year-old, Jesseray found jiu-jitsu, training under Adam Gomez at Georgetown MMA, a club he met through his high school wrestling coach.

Childrey had his professional MMA debut in 2014, winning his first two bouts by submission. 3 fights in 5 months took a toll on Jesseray’s body as he ended the year with a loss in his record and a torn ACL. The injury ended up changing the Kentuckian’s sporting mindset: “I shifted to strictly Jiu-Jitsu in 2015” he explained, “I was coming off my first loss and a week later I tore my ACL. I came back about a year later and decided to shift my focus strictly to Jiu-Jitsu.”

Having trained for a few years strictly with MMA in mind, Childrey’s grappling game was heavily based on no-gi. From there to Jesseray focussing on submission-only was not a big stretch: “coming from a wrestling background, submission only was just a lot more fun to me and at the time I started getting better, that was where the majority of opportunities were to compete at a higher level. Plus, I enjoy the finality of sub only.” 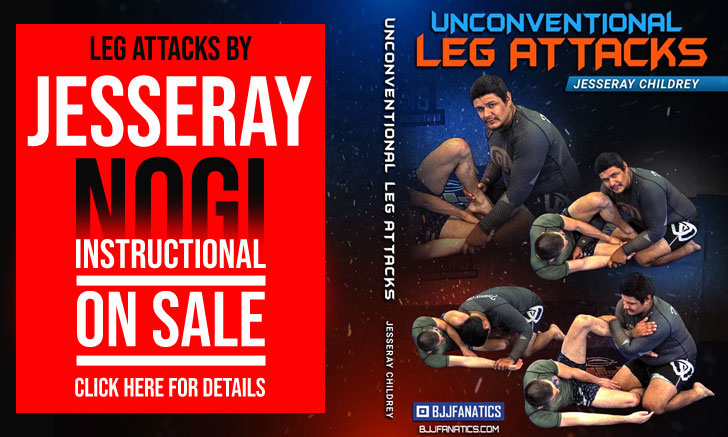 Much of Jesseray’s early training development was led by Brian Jones, after his blue belt, that training was taken over by Israel Gomes at the Georgetown MMA club, under the Killer Bees banner, who awarded all subsequent rank upgrades.

In the meantime, while looking for the broadest range of training partners available in his region, Jesseray Childrey also joined the Nice Guy Submission Fighting academy workgroup, an unlikely union with an interesting back story: “I met most of the Nice Guy crew after I competed against Joe Baize [team co-founder]. After our match, Bobby Emmons [headcoach] of NGSF reached out to me about cross-training. I started spending some weekends over there to train and hang out. Eventually, I got a job in Evansville and started training at NGSF full time.”

After two years of competing on the submission-only circuit, Childrey turned the eyes of the grappling world towards him by placing 2nd at the ADCC West Coast trials in Anaheim, CA, arguably the toughest of the famous event’s qualifiers. The medal also earned the young athlete a chance to compete at the tournament’s world championships in Finland, where he made his international debut. Although the event did not go his way, he stood out and made his mark.

With two years past since the ADCC, Jesseray has continuously proven his worth as one of the top ultra-heavyweight athletes on the submission-only circuit, with solid campaigns at the BJJ Fanatics Grand Prix last year. Expect big things from this young brown belt very soon.