Now Living In The US, Fellipe Andrew Is Ready To Take On The No-Gi World

BJJ Heroes,
4.29K 0
Now Living In The US, Fellipe Andrew Is Ready To Take On The No-Gi World

In the modern era of sports, a flashy personality and a savvy media presence can take you a long way. Unfortunately for Fellipe Andrew, although a very accomplished athlete, he severely lacks skills in the communication department, as a result, his name has been a distant afterthought among public discourse, as shown by a quick search on Reddit/BJJ — our sport’s largest online community, where Andrew’s name appears to be referenced merely 3 times over the past 12 months. A shockingly low number.

When assessing Andrew’s stats, his lack of public recognition does seem mind-boggling. In his two years as a black belt, the 25-year-old has consistently been at the top of the heap, and not by laying on top of people, winning by advantages. Andrew has one of the best work rates in the sport and is in the top 1% of finishers in jiu-jitsu’s pro division. His matches with Felipe Pena and Marcus Buchecha at the 2018 IBJJF World Championship, Andrew’s black belt debut, will forever be among the best we have seen in the tournament. Furthermore, he has wins over most in the upper echelon of the heavy, super-heavy and ultra-heavyweight divisions, although many of those wins happened in Brazil, away from the sport’s spotlight.

But all this is water under the bridge. In an attempt to change his approach to the grappling game, Andrew has moved from São Paulo to Las Vegas, Nevada, training at the Zenith Academy HQ, working under the guidance of the former ADCC open weight champion, and IBJJF as well as CBJJO gold medalist, Robert Drysdale. “The United States is where everything happens in the world of jiu-jitsu these days, the sport’s eyes are zoomed in here,” said Fellipe, who ended the sentence by explaining that he was “also here to sharpen my stand-up and no-gi“.

This adherence to the trending submission-grappling game could be a big and relevant change for the Pernambuco native, who’s not been a regular appearance in the no-gi pro circuit in the past. To prepare for this shift of pace, Andrew has given carte blanche to the legendary American grappler, Drysdale, to shape-up his no-gi skills, though leaving the door wide open for the gi — “Robert is a huge reference in the gi and no-gi world, I intend to focus a lot more on no-gi, though keeping in mind that I will always have big aspirations in the gi“.

So far Andrew seems well on track for a tremendous 2020, as shown by his last competitive performance, at the IBJJF European Open, in Lisbon – Portugal. Below are a few of the astonishing Fellipe Andrew Stats during this tournament. 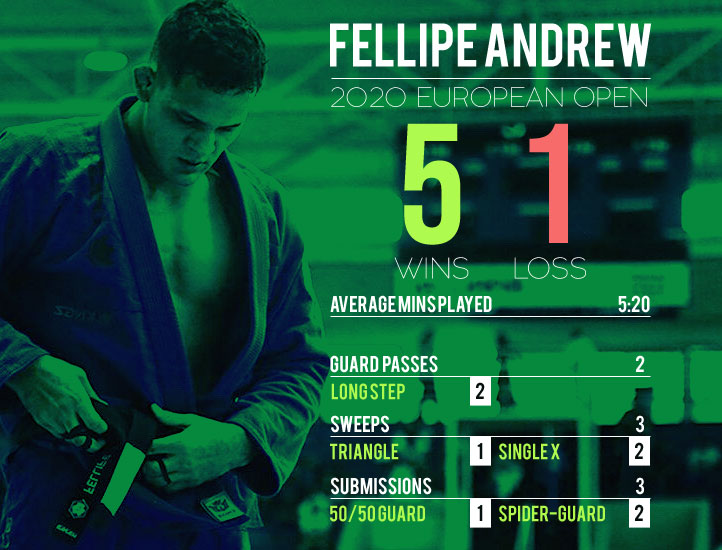 If the Zenith athlete can keep this forward momentum he gained in January throughout the year, we expect Fellipe Andrew’s profile to be greatly improved among mainstream fans.