Right at the turn of the 2010s decade, there was very little in the way of professional jiu-jitsu. No Polaris, no Metamoris, no EBI, no Kasai Pro, no F2W no ACBJJ, nothing aside from one promotion who greatly transformed the submission grappling landscape. That venture was Copa Podio, the vision of Brazilian businessman Jeferson Maycá.

It was through Copa Podio that a few of today’s biggest stars first started breaking through to a mainstream audience. Athletes such as Leandro Lo, Felipe Pena, Keenan Cornelius and many more.

Prone to invest in young up-and-comers, mixing brown belts and black belts, and even adding judo superstars to the Grand Prix format, such as Olympians Travis Stevens and Horacio Antunes; Copa Podio opened the eyes of many entrepreneurs to the jiu-jitsu market, a playground that has changed substantially since Maycá first started streaming BJJ shows back in 2011.

After a slower year than usual in 2018, Copa Podio is picking up steam again and promises its fans plenty of excitement, having 3 Grand Prix already lined up for the year, first one taking place in February. On the build-up to those, the promotion is also launching the Orange League on January 13, a show that will stream at Fighteria.Tv featuring a puzzling main event, the match between a 15-year-old blue belt, Micael “Mica” Galvão, and black belt Leandro Rounaud.

Granted this isn’t your average blue belt, Micael is a highly accomplished athlete in the juvenile division, who also competes in bodybuilding having a wealth of support behind his training, including a personal trainer and sponsorship from a local pharmacy. Rounaud, on the other hand, is an accomplished black belt himself, particularly in the Amazonas circuit, with gold medals at several IBJJF Opens.

We interviewed Jeferson this week and asked him what would be the reasoning behind this mind-bending matchmaking:

“I think it is important to reflect on how advanced these young kids are today, and want to see for myself and others, what is more important, the belt around your waist or the time spent on the mats? In this match, we will have exactly this, because even though they both started training roughly around the same time, one is a black belt, the other a juvenile blue belt.” Said Jeferson, going on to say that it is his intention to fully test these BJJ dogmas: “When some of these kids have been training and competing for 8 years before they reach their blue belts, how can you put them against a regular blue belt that started a couple of years ago when they do get there? It is a strange criterion.”

Although an interesting concept, it seems as though there is little advantage for the black belt to expose himself to such a challenge, Maycá explained the triage process: “I’ve had plenty of problems with black belts lately. Most only want to compete in super fights, they don’t want to expose themselves in a GP. This is happening a lot. I have been a fan of this kid [Mica] for a while so I put the challenge out there, I wanted to see who is the black belt who has the balls to face a blue belt. If he wins, I would add the black belt to the Copa Podio lightweight Grand Prix next month. Lots of people talked crap, saying it was an easy match, but the reality is, only two people stepped forward, and out of the two candidates I thought Leandro had the better resume.” 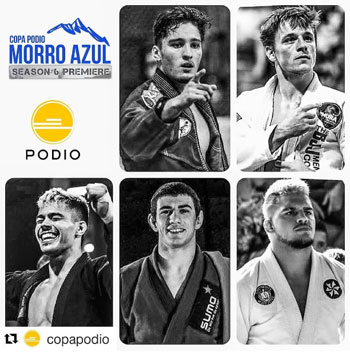 If Leandro Rounaud earns his shot on the Copa Podio GP by defeating Galvão, he will participate in a very interesting line-up: “Copa Podio is looking amazing at the moment. We have three GP events planned [outside Orange League] and we have new big partnerships already aligned for a perfect 2019. The idea is to keep bringing out the best of the new generation and for that effect, we already have Levi (Jones) and Guilherme Rocha, who are not too spoken about by the media but are stars in the making. Also Yan Pica-Pau, Espen Mathiesen, Charles ‘Do Bronx’ Oliveira, Luan Carvalho, and Tarik Hopstock. The idea for the GP is the same as always, having a few well-known names with the up and comers.”

But what of the Orange League? For those unfamiliar with this Copa Podio adjacent event, the OL is a vision of Jeferson Mayca’s. He explained: “This was an idea that matured from that kids challenge we did in Manaus, which had Isaque [Bahiense] and Espen [Mathiesen] teams. Two kids really impressed me for their talent, namely Cole Abate and Marquinhos Carvalho.” Much like the movie Inception, the idea that spawned from that event became the driving force of Mayca’s Orange League. “it was after this that I started following the kids leagues (…) Last year I was invited to work with the UAEJJF at the World Pro and had the chance to see that side of the world when it comes to children’s evolution in BJJ. I had paid attention to the IBJJF side, but it tends to focus too much on Brazilian and American kids, this was much broader.”

With a clear and outlined plan, Mayca’s objective is “to have a real international event where all different countries can face each other on an even field. At the moment the sport is totally dominated by two countries, I want it to be a real challenge, and for that to happen in our sport, we need to go to the younger divisions. (…) Doing this I also hope to promote BJJ to others, outside the BJJ world. The sport’s followers tend to be people who practice it, and I am hoping that, through this, more light-hearted approach with the kids, that it may appeal to a different crowd. I am also using this to scout for some of these kids, as I am sure that when they get to the adult belts, they will be incredibly relevant in the sport.”

With dreams of producing a juvenile world-class league, while staying true to Copa Podio’s pledge to producing a professional outlet for high-level jiu-jitsu, Mayca promises a bright 2019. Stay tuned to the developments of the event through social media @copapodio and @theorangeleague (Instagram).