BJJ Heroes,
2.34K 0
Pablo Mantovani’s Unlucky Tale Of 2020 And How He Overcame Adversity

Most hardcore fans will be well aware of Pablo Mantovani‘s presence in the jiu-jitsu world. A product of Guto Campos‘ famous GUETHO team in Porto Alegre, Brazil, Pablo made waves as a colored belt with World, Pan, and Abu Dhabi Pro titles, going on to expand his name to a broader audience as a black belt, while representing the Atos Headquarters Academy out of San Diego, California – a team associated with GUETHO – where he earned ACB and IBJJF World No-Gi silver medals, as well as IBJJF Pan-American medals in both the gi and no-gi, adding to those, two participations at the most revered of submission-grappling events, the ADCC World Championship.

If you are one of those aforementioned hardcore fans, you may have noticed Pablo’s absence from competition during all of 2020. This was not down to injury, nor was it planned time in lieu, Montovani’s life over the past 12 months has been a real rollercoaster ride, not for the faint of heart. 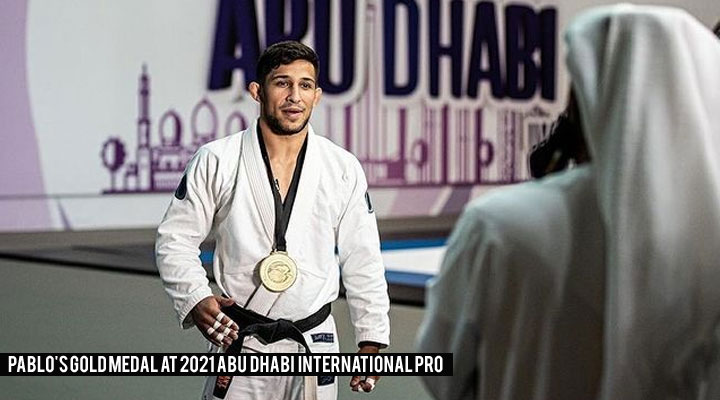 It all started around this time last year. Scheduled to compete at the AJP World Pro Championship on April 17, 2020, Pablo opted to travel to the tournament’s location one month prior to the event, to acclimate himself to the country as this would be the Brazilian’s first major tournament that year. Unfortunately, his plans were completely shattered by the COVID19 pandemic.

“I arrived in Abu Dhabi one month prior to the World Pro, but shortly after I arrived, Corona spread around the world, the event was canceled and airports closed. I was stranded here. I could no longer return to the US. I had the option of going to Brazil, but if I did, it would have been very hard to return to America once the virus went away,” Mantovani told BJJ Heroes.

Pablo opted to remain for a month or two in the United Arab Emirates and wait for the virus to blow past, sadly, that never happened.

“When I saw the cases growing with every week, I was very concerned, not only with the world but also with my situation here as I saw my finances evaporating.” The dire situation led the young athlete to start offering his coaching services at local schools. After talking with Atos team co-founder, Ramon Lemos (who has been stationed in the UAE for quite some time), Pablo heard of Baniyas Sports Club and the available position there for jiu-jitsu head coach. “By coincidence, a good friend of mine was also friends with the club’s management. He took me to their home and I was able to talk directly with the team’s leaders,” said Mantovani, who was offered the job.

Many of us have heard how professional, and how serious UAE takes jiu-jitsu, Baniyas is a leading example of how local clubs live the grappling experience. When, around the world, professional grapplers are expected to compete in amateur tournaments to gain name recognition, a name from which they will profit through sponsorships, workshops, and the odd paid super-fight, in the Emirates, large sporting platforms such as soccer clubs, have invested in a jiu-jitsu league where these teams compete against each other with professional grappling squads, featuring paid athletes.

In the case of Baniyas Sports Club, after the initial acquaintance with the managerial body of the team, Mantovani went through a trial stage to prove his worth in a well-planned/methodical manner. “My objective here is for us to conquer the cup and the championship” Mantovani explained, although “only Arab athletes are allowed to compete in these [national league] events“, and therefore, Pablo’s work is restricted to coaching.

“There are approximately 20-30 squad members, this is very professional work here. Full merit to the coach that developed these youngsters before me. My mission is solely to give continuity to the high standards in place.”

After 17 months away from the competitive scene – a time spent putting his life in order in this new home, earlier this month – Pablo Mantovani returned to action by taking home a gold medal at the AJP Tour’s Abu Dhabi International Pro. His spectacular performance showed the world he is one of the favorites to take home the World Pro next month, but not only that, it showed the type of material Pablo is made of. Someone who was able to overcome a particularly scary moment and turn it into a success story, the epitome of a positive mindset. They say “when life gives you lemons, make lemonade”, Mantovani did just that, and then some.