Still working away from our sport’s international spotlight is one of the most promising athletes of today, Mr. Pedro Lucas. Born in Rio de Janeiro 21 years ago, Lucas is the current Copa Podio Heavyweight champion, a title he conquered last month, weeks after earning the brown belt rank. To win the famous professional-jiu-jitsu tournament, Pedro defeated some of the world’s biggest black belt heavyweight competitors, names such as Marcelo Gomide (GB), Guilherme Lambertucci (FPT), Felipe Bezerra (Checkmat), and Pedro Alex (GFT).

Having lived a full-time athlete’s lifestyle since he was around 16 years of age, Pedro was not always as focused as he is today. In fact, the opposite is true: “I gave my parents and teachers a lot of work growing up. This is why they signed me on for jiu-jitsu classes, hoping that the more disciplined environment of martial arts would help tame my wild side,” Lucas explained to BJJ Heroes in a May 2021 interview.

Starting his grappling journey at a local Gracie Barra academy, Lucas quickly became hooked on the competitive side of the sport, referencing that “as a yellow belt I already trained as hard and often as I could, I already had the long term goal of being ‘The Man’ at the time“, an ambition that fueled Pedro’s exit from Team GB in search of a bigger and more competition-driven workgroup as a blue belt. This quest led the young Carioca to Campo de Treino (CT) Honório, one of the hardest training rooms in the country at the time with names such as Patrick Gaudio, Tácio Carneiro, Victor Honório, to name a few.

“Training with Master Honório at such a young age only fed my goals. Sharing the mats with so many world champs caused a huge impact. I looked at [Victor] Honório [the son of team leader, Master Honório] and tried to be the beast that he was. Model myself as him, train as hard as him. This was a big learning curve for me.”

During that same year (2016) when Pedro joined CT Honório in search of the best training for his career, Lucas also started his own grappling school, a project founded alongside his father – Rodrigo Ribeiro – who is a black belt under Master José Honório. Together, father and son taught classes at Lucas’ family garage, the project became aptly known as Garage Jiu-Jitsu. Today, the Garage squad is no longer located at a physical garage, instead, Pedro and Rodrigo have relocated to Rua Araguaia in the Jacarepaguá suburb of Rio de Janeiro, in the city’s West Zone. A small, hard-working workgroup. 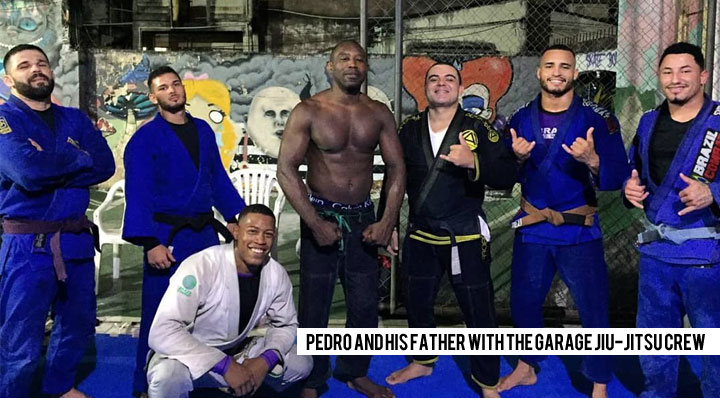 Although a force in the colored belt divisions of the sport in his native country, Pedro has never competed outside of Brazil, where the most prestigious tournaments of the IBJJF circuit take place, namely the World and Pan American Championships, which are traditionally held in California. The reasons for his lack of international experience are, sadly, all too common in our sport: “I never had the finances that allowed me to request a US visa or even to get a passport. I only managed to afford the passport last year,” Pedro explained.

This vicious cycle is the reality of countless jiu-jitsu athletes every year. Unable to compete in the sport’s top events, grapplers have diminished exposure, which in turn blocks their access to profitable sponsors and paid professional events. For a long time, Pedro dwelled his thoughts on this very predicament, the understanding that he could go much further if he had access to the right resources fueled his angst: “these circumstances were painful to deal with for a long time” said Lucas, clarifying that he overcame this conflict by placing his fate in God’s hands, “I have to believe God has a plan for me and lay my trust in his plan“.

More recently, Pedro received a career changing invitation from Atos Rio de Janeiro team leaders Alexandre Carrera and Davi Ramos. After competing through his blue and purple belts for CT Honório, Lucas is hoping to expand to new horizons under the guidance of these two coaches. “Coach Carrera invited me to be part of the team. I met Ramos and immediately felt at home, that guy has the heart of a mother, he is incredible. Sharing the mats with Davi Ramos and Ary Farias is incredible. They have done it all, they have stepped on the mats I also hope to step on one day. Accomplished what I dream of accomplishing.”

Being part of an international squad has plenty of advantages and opens doors that would have otherwise remained closed. “Today I am affiliated with a great team, I am conquering important sponsorships, and connecting with people that want to invest in me. My time is coming, I am sure“. With a well-planned team network, sponsors, and the talent already possessed by Pedro Lucas, we expect the young Rio native to be making a big statement on an international level very soon, particularly after his important wins over the past year at the IBJJF Rio Open, IBJJF South American Championships, Purple Games and the aforementioned Copa Podio. Watch this space as we will surely be covering it.