Currently riding high on the #1 purple belt ranking of the International Brazilian Jiu-Jitsu Federation (IBJJF) is Luciana Mota, a representative of Robert Drysdale’s Zenith Academy in Las Vegas. Born in Manaus, Mota is the latest in a long line of grappling superstars who spawned from the famous Amazon city.

Interested in martial arts since a very young age, Luciana was introduced to judo at the age of 9, though that did not turn out as well as she had hoped for: “The gym didn’t have any other girls” Mota explained to BJJ Heroes, “and my mom wasn’t comfortable with me training only with boys. This was the reason why I ended up leaving after 1 year.”

Life would lead a different path during her pre-teens and early teens, a time when Luciana started placing her efforts on-to the fitness world. It was while embedded in the world of weight lifting and bodybuilding (a sport she competed in) that Mota befriended Diego Castelo Branco, the man who would become her husband and the person who would introduce the young Manauara to jiu-jitsu.

A black belt himself, Castelo Branco convinced Luciana to try her first class in January 2015: “When I met my husband in 2012 I had no idea about jiu-jitsu. I went to the academy a few times and watched the training sessions, eventually, he invited me to do a trial class“. From that first taste of grappling, Luciana started training more regularly and by the second month, she decided to have her first taste of competition, placing second in the biggest tournament of her town, the ‘Amazonense’, in which she placed second that year. 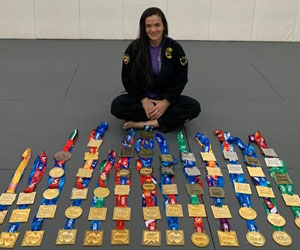 Most people would have been pleased with the result, but not Luciana: “I was really upset about losing the final. My husband was proud but I am too competitive. I was not happy“, this event led Mota to train harder for the following championship, and before she knew it, Mota was hooked “it was no longer just training. I wanted to be a champion and I trained harder and harder each week to achieve that goal“.

Although an accountant with a steady job, jiu-jitsu started consuming Luciana’s life, and soon enough she started winning tournaments. Diego saw Luciana’s potential and pressed her to take grappling seriously, which she did.

With a strict training routine, a sport-specific diet and medical paraphernalia, Luciana quickly became one of the top athletes in the region, earning her blue belt in 11 months of training. With just about over 1 year of training, Mota placed 3rd at the Brazilian Nationals and later that year the “Athlete Of The Year” award by the Amazonian BJJ federation.

The series of positive results led Luciana and Diego to make a decision: “The reality of living professionally from sports in Brazil is very tough, but my life was fully dedicated to jiu-jitsu and me and my husband ended up making the choice of moving to the United States, where the majority of big IBJJF tournaments take place.”

The move proved to be a success. In 2017 Diego and Luciana moved to the USA, settling in Las Vegas, and during 2018 Mota ranked #2 as a blue belt in the overall standings. This year Luciana is having her best season yet, having earned the #1 position as a purple belt, and the sky seems to be the limit for the former accountant. Wherever Mota’s career takes her in the future, we will be here to report it.