The butterfly guard or hooks guard, in Portuguese: guarda de gancho(s) or guarda borboleta; is one of the oldest and most traditional forms of guard playing in jiu jitsu and is often labelled as a classic guard. The butterfly hooks are designed to jeopardize the base of the fighter with the top position (this being defined by the hind end off the ground and in most cases head above that of the guard player) using the the bottom player’s feet as hooks against the inside of the guard passer’s legs.

The History of the Butterfly Guard

Although grappling has been part of humanity since fighting began, not much is shown about guard work in ancient paintings or scripts, and judo was apparently the first martial art to truly open “the book” to the fighter with the back towards the mat, a consequence, no doubt, of it being unarmed combat style. The hooks guard seems to have been one of the first recorded guard styles, a natural transition from stand up to the ground considering its strong connection with the tomoe nage, the throw that is often called a sacrifice throw due to the the inherent back exposure.

As judo/jiu jitsu migrated to Brazil by way of Mitsuyo Maeda in the early 20th century, much of this technical knowledge carried over with him. In the early years, other judoka and catch wrestlers travelled to Brazil also, adding their bits of information to the gentle art, but as jiu jitsu evolved in the South American country, judo’s techniques also kept developing. Due to the fantastic investigative work done by Bruno Schindler, we now have 1982 footage of kosen judo competitors using the (often labelled) 1990’s BJJ technique “Joga fora no lixo“ from butterfly guard. We also have evidence of judoka competing kosen judo rules at the Nanatei Championships, using the De La Riva hooks and spider guard as early as the 1970’s. What this means is that jiu jitsu seemed to be (technically) moving one step behind kosen judo, as most of the Brazilian technical development truly started to boom in the mid 1980’s and 1990’s. This was also the case of the butterfly guard.

The hooks guard was no stranger to jiu jitsu previous to the aforementioned 90’s boom, and is seen repeatedly in memorable matches such as Carlson Gracie vs Waldemar Santana (vale tudo), Rickson Gracie vs Peixotinho, or the famous Rolls Gracie vs Rickson Gracie training session (below):

The 1980's and The Sérgio Bolão Effect

The 1980’s marked the awakening of sport jiu jitsu. Although the first federation of jiu jitsu opened it’s doors in the mid 1970’s, the sport grew gradually and started to truly take off during the following decade, with the more constant interaction between competitors of different academies helping the growth of jiu jitsu’s techniques along the way. 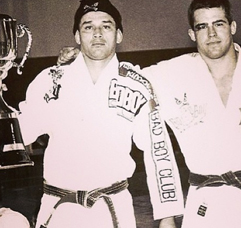 If up to the 70’s the hooks guard was automatically connected with the “Balão” (balloon sweep), that changed with different techniques being added by some of jiu jitsu’s rising stars. One of the sport’s biggest names in the mid 80’s was Sérgio “Bolão” Souza. Bolão made the guard his home, particularly with hooks, a position he used to sweep several of the sport’s most well known legends. Sergio applied a few changes to the game, specifically he often found better leverage in using pressure against his opponents biceps with one leg (hooking with the other) and/or holding the bottom of the opponents gi pants on the opposite side of the biceps pressure, this common sweep is often called a “Bolão Sweep” among the older generations.

But there were others, while Carlson Gracie‘s team had the creative Sergio Bolão and also Cássio Cardoso as two of his best hook guard players, Carlos Gracie Junior was gradually building his own platoon of hook sweepers that would change the face of the sport particularly in the 90’s, a team that started with Jean Jacques Machado and Renzo Gracie, which carried on well into the 1990’s with legends such as Nino Schembri, Flavio Almeida, Renato Miragaia and many others being added to the troup.

The 1990's and The Butterfly Guard 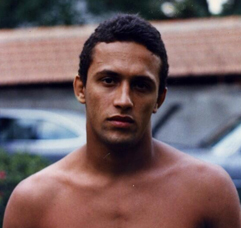 Much of the technical development in jiu jitsu seems directly connected with the birth of the CBJJ (Confederação Brasileira de Jiu Jitsu) in 1994, which brought more tournaments to the jiu jitsu scene in Rio de Janeiro, as well as more prestige to the competitors, it also coincided with the release of two of the most established jiu jitsu/combat sports magazines in Brazil, GracieMag and Tatame. This continuous growth of the sport was followed by the hooks guard which gained a lot of momentum around the late 1990s and early 2000’s, with Jean Jacque and Renzo Gracie causing havoc in ADCC’s 77kg division, while Leo Santos dominated CBJJO’s lightweight division with his butterfly guard game and Nino Schembri did the same in the CBJJ at middleweight.

The butterfly guard carried on prospering in the hands (or feet rather) of others such as Fernando “Tererê”, Fernando “Margarida” and Marcelo Garcia, three of the sports most iconic figures. Marcelo truly raised the bar of the butterfly guard, setting up his trademarked guillotine and x-guard from the butterfly hooks.

Since Marcelo Garcia’s domination of the sport up to 2010, the use of the butterfly has slowed down with the sportsmen and women placing bigger focus towards other styles of guard playing, particularly the De La Riva, its many variables as well as the 50/50 guard.