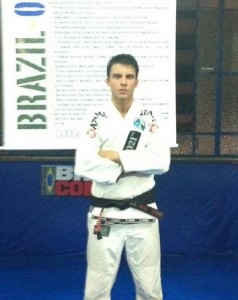 Leandro Lora is a representative of the Brazil 021 Jiu Jitsu team. A former Kioto team member, Leandro has earned his black belt from the prestigious Master Carlos Henrique on July 2010.

Leandro Lora was born on the 14th of June, 1979 in Rio de Janeiro, Brazil. He started practicing Jiu Jitsu when he was merely 4 years old at the famous kids academy of Master Francisco Mansur (Kioto). In the beginning, Leandro wanted to learn martial arts due to the famous 1980’s film “The Karate Kid”, and although BJJ was/is a long shot away from Mr Miyagi’s “wax on/was off” Karate style, Leandro was too young to know the difference and enjoyed it thoroughly.

Carlos Henrique, Álvaro and Francisco Mansur were Leandro’s coaches as he started, but growing up he kept closer to Master Carlos Henrique, and it was Henrique the man that awarded Lora all his belts until his black belt on July, 2010.