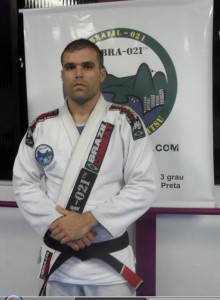 Thiago Leiras is a Brazilian Jiu Jitsu black belt under the prestigious Flavio Aleluia and a member of the Brazil 021 BJJ team. Having medalled in important tournaments such as the Rio Open, Copa América and Copa Cyclone, Leiras reached the degree of black belt in August 2011.

Thiago Leiras was born on the 17th of April, 1981 in Rio de Janeiro, Brazil. He started martial arts through Judo, but he did not truly agree with Judo’s rules, making the fight based solely on the stand-up aspect of grappling, and so, when Leiras found Jiu Jitsu, he immediately felt this was the sport he should be doing. Thiago was 17 years old when he entered Master Flavio Aleluia’s academy, and he never changed camps, going from while belt all the way to black belt (on march 2011)