ADCC, Egan Inoe And The Birth Of The Rashguard Uniform In Grappling

BJJ Heroes,
2.57K 0
ADCC, Egan Inoe And The Birth Of The Rashguard Uniform In Grappling

Most hardcore fans will be well aware of Egan Inoue (full bio here), one of the American pioneers in our sport and a very interesting Hawaiian grappling figure. A man whose life could easily be book or Hollywood movie worthy material. Long story short, Inoue was a professional racquetball player and a world champion in that sport as well as a member of Team USA’s squad and Olympics qualifier. After his racquetball career ended, Egan turned to jiu-jitsu where he became the first non-Brazilian to win an IBJJF World title (1996 & 1997), he also founded Grappling Unlimited, an important academy in the Hawaiian archipelago, producer of names such as Baret Yoshida. Egan is also an ADCC veteran who reached the semi-finals of the famous tournament and an experienced MMA fighter.

Alongside his incredible athletic career, Egan also ran a few successful businesses, first when he was a part of the racquetball world with his racquet company (E-force), which grew exponentially and was sold at a hefty profit when Inoue left the sport. Later he built the aforementioned Grappling Unlimited Academy and other entrepreneurial endeavors, but despite his keen eye for business, the groundbreaking idea presented in this article was not idealized for monetary gain. It was all down to his own competitive advantage and form following function ideals. We are talking about the rashguard, one of the most common pieces of attire in modern-day no-gi jiu-jitsu, a piece of grappling clothing that gained popularity around 20 years ago.

We got in touch with the grappling visionary, Egan to discuss the grappling rashguard’s inception back in the late 1990s, and asked Mr. Inoue about the chain of thought that led to his creation:

“The way I started off using rashguards was that I had tried to wear really tight t-shirts [while grappling], the reason for that was that, if I went bare skin, people would slip too easily. So, literal attacks or holds would slip. I know people wanted to be as slippery as possible for escapes, but I really wasn’t thinking of escaping anyone I was worried about someone escaping me and how I could prevent those escapes.” said Inoue of his thought process, adding that “the t-shirts would get wet and stretch out. They were not as grippy because there was too much play in them. So I thought ‘maybe try a rashguard as it doesn’t stretch out and it provides enough grip for me to hold on to an armlock or a body lock, side control’. All these positions where I could use it for my advantage“.

Being Hawaiian and an avid surfer, there was no shortage of rashguards for Egan to play with the idea, and it quickly became clear that he was on to something. “So, I used that rashguard in practice for a while,” said Inoue of his trial-and-error stage, “my gym wasn’t in a studio, it was a warehouse. There was no A/C, it was super hot but we had a big fan. When we were in between rounds and I would stand in front of that big fan and the rashguard was like an A/C because it kept some of the water and with the wind blowing it cooled me off“. 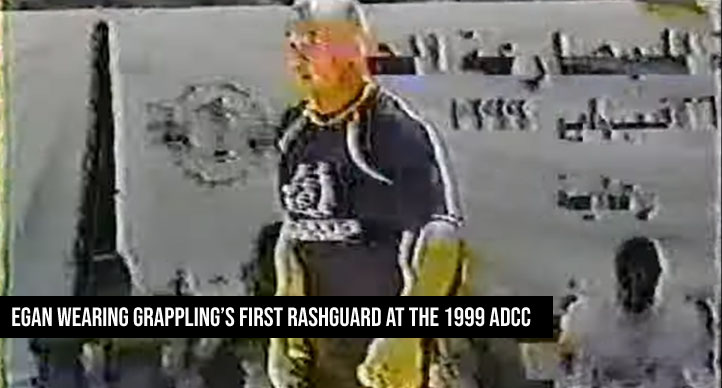 By the time the 1999 ADCC World Championship came up it was time to decide which uniform to wear. The ADCC ruleset makes very few limitations to one’s outfit, believing in the athlete’s individuality and expression, therefore the time was right for Egan to bring something new to the table: “I was so used to it and so comfortable in it [rashguard] by the time the ADCC was up that I thought I’d make some with the Grappling Unlimited school logo on it, and I went ahead and followed with it.” Soon after, Egan’s top student (and ADCC Hall of Fame), Baret Yoshida started using it also, competitively, and the trend was set. Within a few years, the practicality of the rashguard in a grappling setting sunk in and the vast majority of the community adapted this style of uniform for competition. A trend that persists to this day.

Below is the first filmed grappling match where someone is wearing a rashguard uniform, namely Egan Inoue in his 1999 ADCC quarter-finals match with Renzo Gracie, courtesy of Riccardo Ammendolia’s YouTube channel (give him a follow if you can, he has fantastic content in there).