Once again BJJ Heroes is back with the latest stats report on the submission-grappling’s biggest tournament, the ADCC (Abu Dhabi Combat Club) World Championships, which was held in Las Vegas, Nevada, USA, on September 16-17, 2022 (check full results of the tournament here).

The event was created in 1998 with the intent of being the ultimate grappling show. Much like a Bloodsport type tournament where several grappling combat sports such as Brazilian Jiu-Jitsu (BJJ), Judo, Shootfighting, Freestyle Wrestling, Catch-Wrestling, MMA, and others meet under a unique ruleset that caters to this wide range of competitors.

Over the past 24 years, there has been a gamut of champions from a range of martial arts, though the dominant force has been BJJ, a trend persists to this day with nearly every 2022 champion being of a gi-jiu-jitsu background. The exception this year was Gordon Ryan who has focussed solely on no-gi from the start of his career.

But let us get to the stats. This event received groundbreaking coverage thanks to the efforts of the show’s main promoter, Mo Jassim, who left no stone unturned when raising awareness of the championship. The fans responded by coming in, in droves and the athletes delivered one of the most action-packed tournaments in recent ADCC history. We saw an unprecedented number of instances recorded (instances being positional exchanges, i.e. takedowns, sweeps, guard-passes, and back-takes/mounts). Below is our analysis of the data we collected from the show.

SUBMISSIONS ON THE RISE

This year’s tapout count hit the big 4-0, 40 submissions shared between the male and female tournaments and 41 if we take into account Gordon Ryan‘s submission win over André Galvão in the open-weight super fight. A number seldomly achieved in the event, which sets the ratio at 36%, a respectable number for a high-level competition akin to the 2022 IBJJF World Championships (gi) which stood at 35% this year.

Equally interesting is how the dominant submissions are consistently the same, with a slight setback for heel-hooks in 2022, which showed the lowest count of the past 3 ADCCs with solely 5 successful finishes. Below is a graph of how the submission meta has evolved over the past 3 editions of the ADCC World Championships.

Top Finishes Used At ADCC Over The Past 3 Editions: 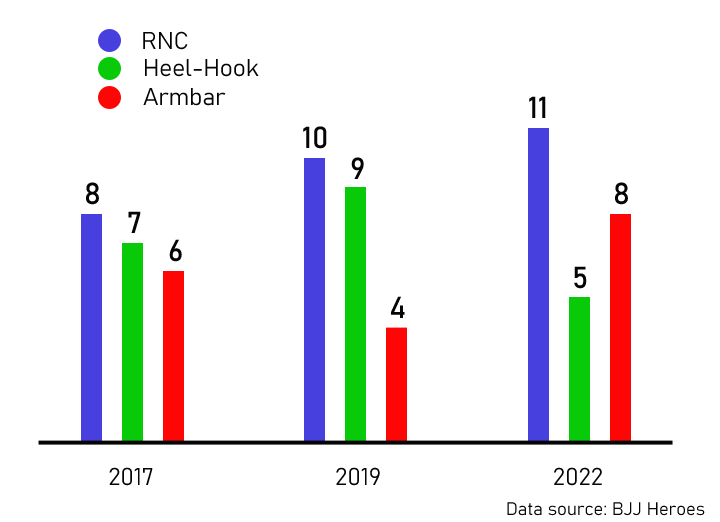 Out of all the submission hunters at the event, only Kade Ruotolo was able to achieve a 100% submission percentage, finishing all his matches in the 77-kilogram division as he became the youngest ever ADCC Champion at the age of 19. 4 matches, 4 submissions for the Atos Headquarters team representative. Also with 4 submissions was another breakthrough star of the ADCC tournament, Giancarlo Bodoni, but this includes his matches in the open-weight division, which lowers his overall win ratio to a very respectable 80%. 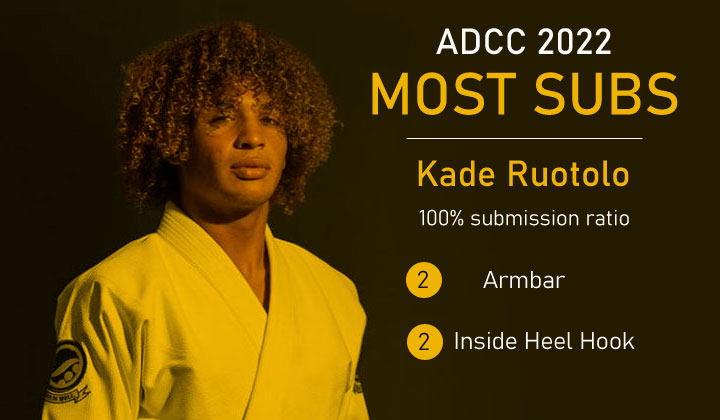 With this submission count, Kade also made it to a select group of athletes who won their divisions with a 100% submission rate. The only other champions who have achieved this impressive feat in the 24-year history of the tournament were Alexandre Soca, Jean Jacques Machado, Marcelo Garcia, Kron Gracie, and Roger Gracie.

We have also observed how weight classes differ in terms of submission hunting mindset and how they performed this year in relation to the tournament’s history.

With the exception of the 99-kilogram division, all weight classes matched or outperformed their previous ADCC average, an example of the type of mentality that was brought forth by most competitors at the Thomas & Mack Center Arena.

To illustrate this more submission-oriented mindset we have built a graph with the average submission percentage of each division in 2022 and matched it with its historic average, meaning, the average percentage when counting all ADCC matches since 1998. 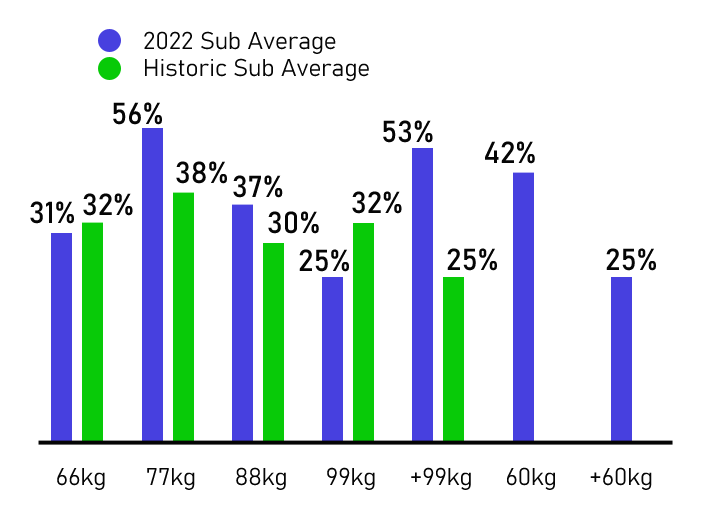 Digging more into the Leg-Locker versus Traditional style players, and despite there being continuously higher numbers of leg-lockers competing at the top level of submission grappling, the sport’s macros still show the game is dominated by upper-body submissions, contrary to what many would believe. 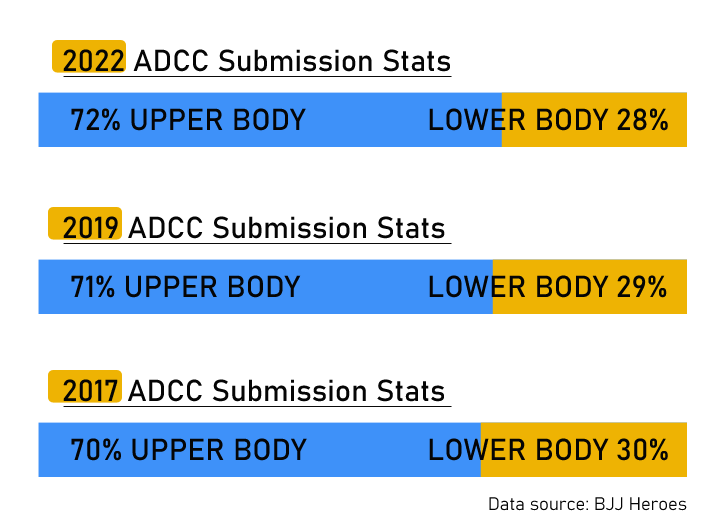 Taking into account that all subs in the ADCC World Championships accounted for 36% (40 subs) and only 11 of those were leg-locks deems this style of grappling a hard one to pull off at this level of competition.

This conclusion is substantiated by the fact that no leg-lock specialists conquered a gold medal, with the exception of Gordon Ryan who is extremely proficient at this type of approach but – none would argue – has a vastly more inclusive game in his portfolio.

WHY DO LEG-LOCKERS HAVE DIMINISHED RETURNS AT THE ADCC?

This is an interesting topic that should be fairly easy to address. The leg-lock hunter blueprint tends to be that of an athlete who favors playing from his guard, and although there are savvy leg lockers in the game who gameplan from a top position, they are in the minority or tend to be positional-minded athletes who will attack a foot if one is available, i.e. Giancarlo Bodoni, Kade Ruotolo, and PJ Barch.

So, the issue is not with leg-lockers per se, but more down to the style of play they tend to choose. Another clear example of this is that, out of the many athletes who elected the guard as their main weapon, only one made the podium, Diego “Pato” Oliveira. Others, like Gordon Ryan, Kaynan Duarte, or Craig Jones solely pulled guard when necessary and/or when their opponent deemed it necessary.

IS PLAYING FROM THE BOTTOM A DEAD END?

Many variables come into play when addressing the guard as a path to ADCC glory. Having an aggressive guard will certainly get your foot through the door as we’ve seen many guard players be incredibly successful at conquering the tournament’s qualifiers. Athletes such as Jeremy Skinner, John Hansen, Elisabeth Clay, Lachlan Giles, Tommy Langaker, and more. At the World Championships, we have also seen incredible guards at play this year with violent and highlight-reel-worthy material, but looking at the data with a magnifying glass you can easily spot how this should be a weapon best kept for special occasions.

From the 40 submissions observed at the 2022 ADCC Championships, only 9 came from the hands and/or feet of a guard player. We have also looked into how many matches were won by a guard player’s sweep or back-take, basically how many bottom athletes managed to successfully force match-winning points on the board when they couldn’t do it via sub. That count was 10. Combining the subs from the bottom and these match-defining points amasses a total of 19 matches won via the actions of a guard player, 17% of all 2022 ADCC victories, not even a quarter of the overall count.

TOP SWEEPS IN THE GAME

Although the guard may not be the most desirable spot to be in an ADCC World Championship, it is still a position that allows you to achieve victory, and this year we did see a rise in sweeps, particularly during the first 5 minutes of the matches, in the sub-only portion of the clashes when athletes played more “loosely”.

A total of 39 sweeps were recorded by BJJ Heroes this year, with the “wrestle-up” style sweep being the most successful with over two times the second most prosperous reversal. 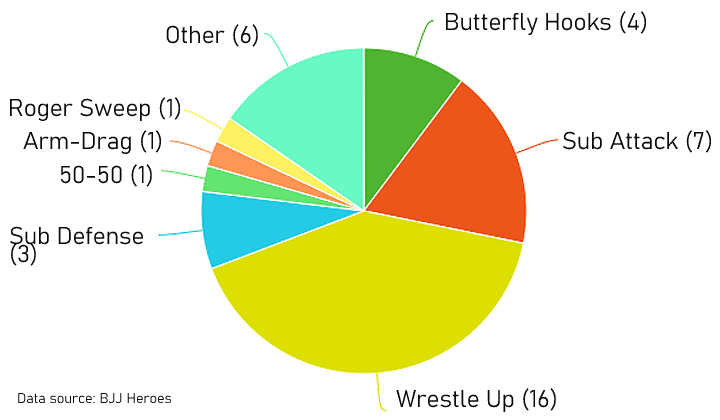 The biggest number of instances recorded by BJJ Heroes was in the wrestling department with 66 takedowns accounted for in the 60F, +60F, 66M, 77M, 88M, 99M, and +99M kilogram divisions. We did see even more in the absolute but opted to leave those out of the equation given that we will address the open weight separately.

This takedown count dwarfed every other point securing action this year, be it back-takes, mount-control, guard-passes, sweeps, or even submissions. It was also nearly 40% higher than any other year since we started recording these stats in 2015.

Another interesting part of the ADCCs micro-analysis is how the wrestling game has evolved over these past few editions. Where once we had the single and double legs as the rulers of the tournament’s takedown game, in comes the body-lock making an appearance for the first time as the dominant throw.

Most Used Takedowns At The ADCC 2022: 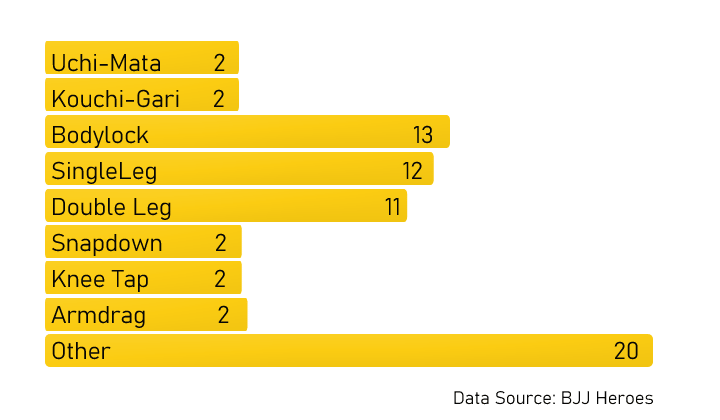 But who were the most successful competitors at the takedown game, in their respective weight classes? Interestingly, we have a 3-men tie between Micael Galvão (Escola Melqui Galvão / F-Sports), Giancarlo Bodoni (New Wave), Kaynan Duarte (Atos), all of which conquered this all-important position on 4 occasions. 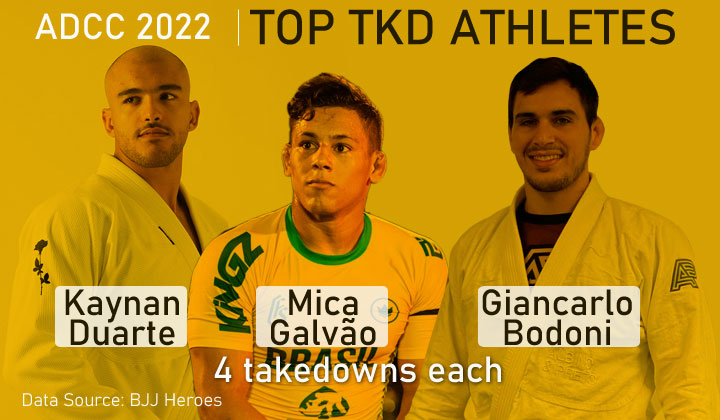 But is there a strong correlation between a takedown as an immediate path to success under the ADCC ruleset? Certainly forcing top position on an opponent has its advantages and sets the tone of the match, but it won’t necessarily win you one.

These 66 takedowns we accounted for were spread across 44 matches, and not all of them scored points as some were conquered within the first 5 mins of the match (sub-only).

Within those 44 matches, only 33 were “unanswered” takedowns, meaning, the athlete who performed the throw didn’t end up being taken down himself at some point in the match.

And within those 33 unanswered takedowns, 24 saw the better wrestler’s hand being raised. 9 of those – more proficient – wrestlers, ended up losing their match.

BACK CONTROL, THE QUEEN OF DOMINANT POSITIONS

The influence of the takedown as a deciding factor for victory doesn’t end here as its influence spreads across a wider number of winning ingredients.

The takedown dynamics directly accounted for 10 back-taking instances within the 29 overall recorded by BJJ Heroes. Meaning, back-controls that were established from a standing sequence, with 7 of those being performed by the takedown attacker and 3 from a takedown defense (think, sprawl to the back).

Another 11 back-takes were recorded from a passing sequence when the top player initiated a guard pass and the bottom player was forced to expose the back to protect the pass from being completed. 2 other back takes came from odd exchanges, i.e. guard passer lost his balance while securing side-control and in that scramble, he ended up with his own back exposed.

The guard accounted for another 5 instances of back takes also, making it a total of 7 back controls from bottom athletes and 22 from top one.

Maybe the most conclusive aspect of the back takes is that it has shown to be the biggest deciding factor when predicting the winner of a match, outside (obviously) of the submission. Out of the 29 recorded back takes every single one of those led to victory. No athlete who conquered back control (in either the sub-only portion or points portion of a bout) lost their match.

These are similar dynamics to the mount as every single athlete who achieved mount control at the ADCC World Championships also saw their hand being raised, although there were lesser numbers of mounts being conquered (19) and a fair few came from an already established back control.

Passing remains the best way to conquer the back and/or the mount, the two dominant positions that seem to, by our accounts, guarantee a win under this ruleset. At the ADCC we saw 27 established passes, with many more ending in that back-taking scramble we established previously.

The winning strategy for guard passing shown by the data here displayed could not be clearer. The way to pass the guard under the ADCC ruleset is through chest-to-chest connection, with body-locks and half-guard passing mauling every other style of play.

Not only does pressure passing allow you a close connection when/if the bottom player turtles, but it also helps keep the legs out of danger. 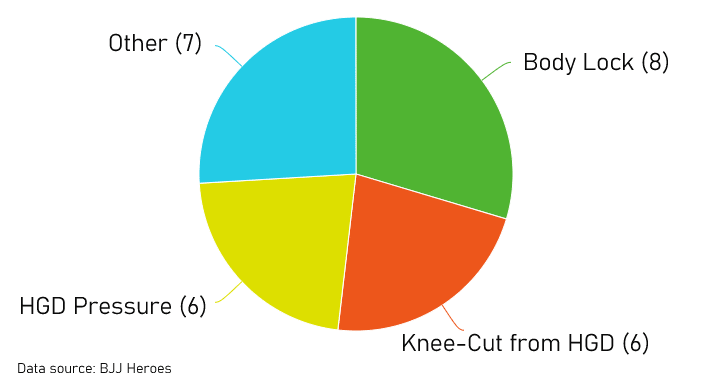 BLUEPRINT OF THE PERFECT COMPETITOR

In sum, what the data shows us, time and time again is that the ADCC ruleset favors an athlete who is aggressive when going for takedowns, or wrestles-up extremely well, likes to pressure pass, and is positionally minded. Meaning, an athlete that works to conquer dominant positions and either maintains his control or improves on it.

Out of every single match observed, only two athletes were able to overcome being behind on the scoreboard and ended up winning their matches at the 2022 ADCC World Championships, they were Amy Campo and Josh Hinger.

The original cover photo in this article was taken by the stupendous Lisa Albon.