As in our previous ranking, the rules of this little exercise are simple: Every black belt athlete who achieved victory in a minimum of 15 grappling matches at a professional/high-level event was counted. This means a tournament/GP/super-fight promotion with talent depth similar to an IBJJF adult black belt style tournament.

Please note that, for the purpose of this exercise, EBI overtime style submissions are not accounted as subs as these are obtained outside the flow of the match, starting from pre-set advantageous positions. Also, it is worth mentioning that the submission ratio of these athletes is what is taken into account for this ranking, not the number of submissions. That said, if two athletes have the same submission ratio, we will look at their numbers of submissions as the differentiator.

This list is compiled with the competitors who have successfully placed the submission as the mission, ahead of or at least in parallel with their podium objectives in this sport’s international competitive circuit. 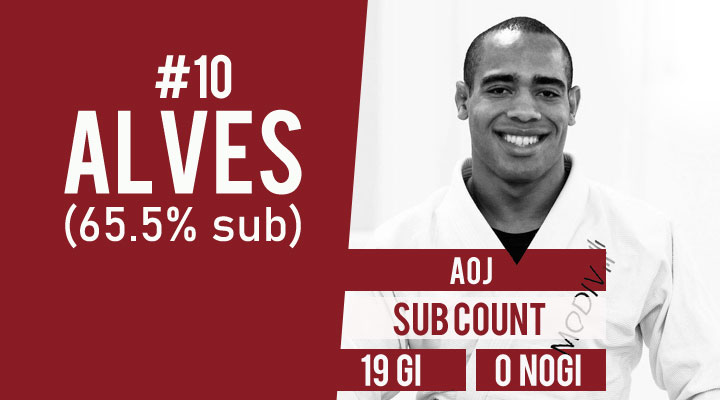 What started as a glorious, nearly flawless, season for Johnatha ended in a blunder for the extraordinary lightweight. Set as THE favorite to conquer the World Championships this year (his first attempt at the big show), Alves’ Mundial campaign was cut short once a hand injury placed the young Brazilian on the sidelines of the tournament after his first match.

Although his world title aspirations were forcefully postponed, the Art Of Jiu-Jitsu representative was still one of the most proficient athletes on the IBJJF circuit. 31 matches overall (1 no-gi match), 29 wins, and a whole lot of submission are what set Johnatha Alves apart from the pack and on this list of top 2021 finishers. 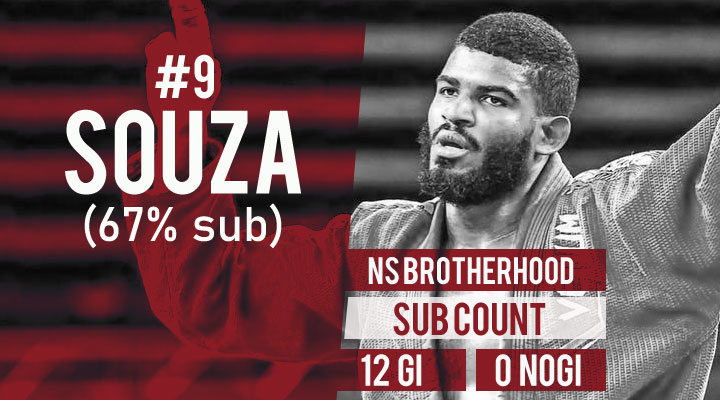 Once hailed as the most promising Brazilian athlete of his generation, family life and injuries ended up drawing Souza away from the competition scene for a couple of years. Now in the US, Yago is slowly but surely returning to his old form.

Competing exclusively in the gi during 2021, Yago was able to amass 18 straight wins, 12 of which by submission. He was also one of the very few athletes this year who truly put middleweight world champ, Tainan Dalpra to the test at the final match of the IBJJF Pan Championship. 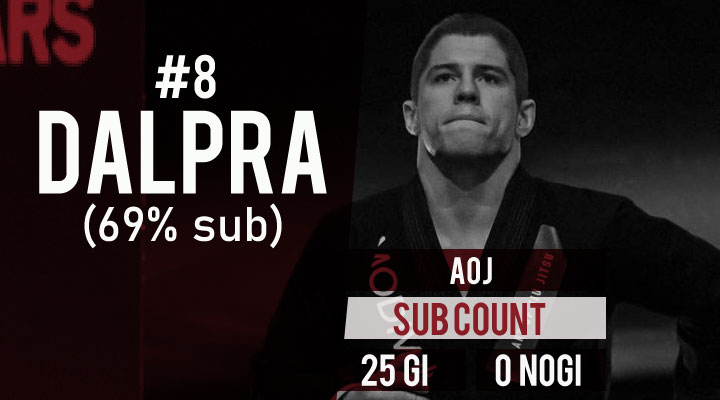 One year as a black belt and already widely regarded as the King Of The Middleweight Division. Everything Tainan does is done clean, precise and with intent, a style many will remember seeing in his coach, Guilherme Mendes, way back when.

Solid from the bottom, devastating from the top, Dalpra combined his positional dominance with a relentless quest for the finish making him one of the most interesting athletes to follow in the sport. As a side-note, it truly is a shame to see so many pro-events openly steering away from gi jiu-jitsu as so many of the sport’s new generation, like Dalpra, have proved time and time again how submission is a top priority. 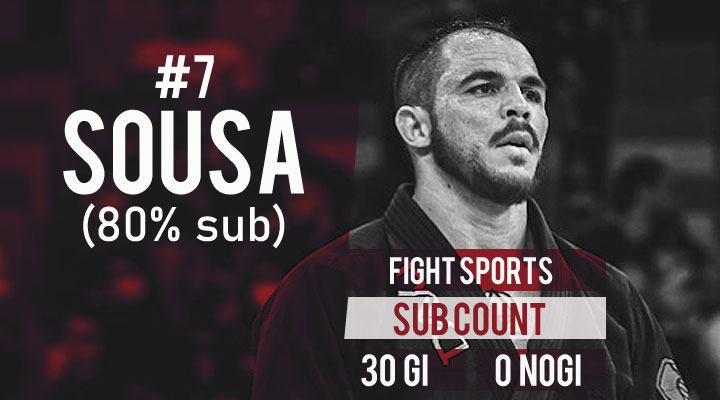 The heaviest athlete on the Top 10 finishers is Roosevelt Sousa of Fight Sports. The ultra-heavy / super-heavyweight was unable to compete in the United States this year due to visa issues, making the best of a bad set of circumstances by turning to the AJP global circuit, there fighting exclusively with the gi. 51 matches, 45 wins, and a whole lot of submissions have placed Sousa in the #7 position of our top finishers podium. 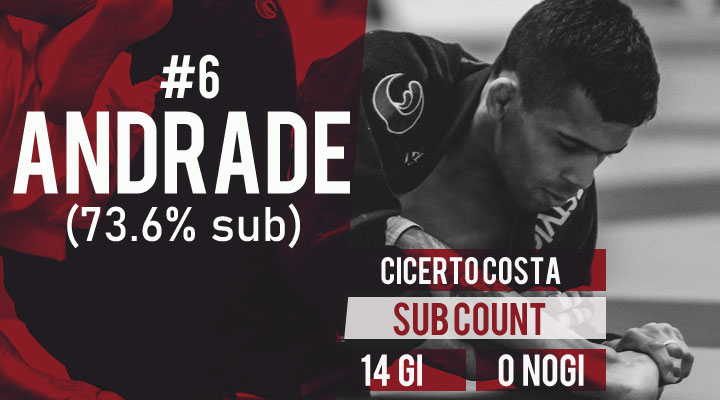 For the first time since we started keeping records of the year’s top submission finishers, this is the first time we see two roosters weights on the top 10. This year’s list also shows a majority of lighter-weight athletes, further cementing the lighter weight classes’ claim to being the sport’s most exciting divisions, currently.

Jonas Andrade was very busy throughout 2021, competing all across the globe, from Moscow to Abu Dhabi, from the Netherlands to the USA, in the AJP and IBJJF’s gi circuit, with the botinha-lock being his most utilized submission. 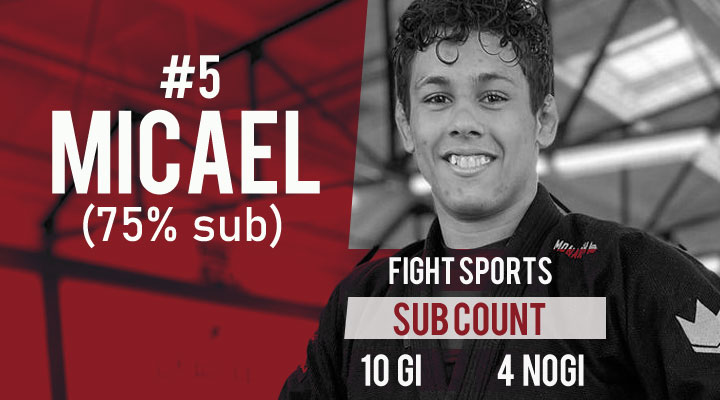 At number 5 we see the first “hybrid athlete”, the teenage phenom, Mica Galvão. Hybrid in the sense that Galvão split his season between gi and no-gi throughout his 23 matches this year. Unable to compete in the IBJJF due to his age, the Manaus athlete competed on the professional no-gi circuit and in the AJP gi circuit, where he conquered 20 wins, of which 8 wins were in the no-gi circuit (4 via submission), 12 in the gi (10 via submission). 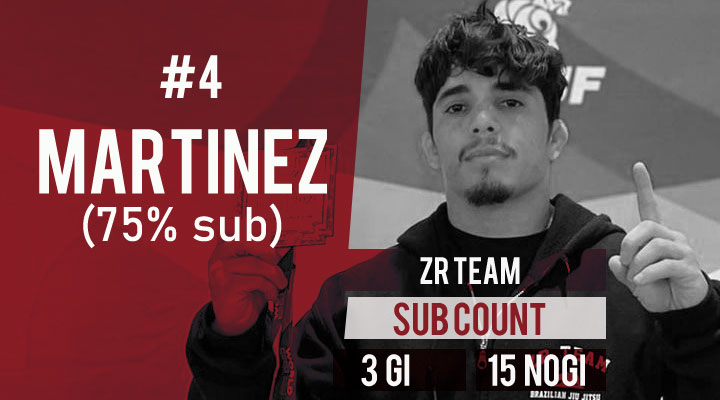 Many had Estevan as the most entertaining grappler on the international circuit already, hopefully, this article can confirm everyone’s love for “The Giant Slayer”.

45 matches in 2021, which included many attempts in the open-weight and many more in weight classes above his natural weight. Estevan had 32 no-gi matches and 13 gi matches, but with only 3 wins in the gi, most of his 24 wins came from his no-gi matches, a ruleset where his style truly shined brightest.

Estevan is acrobatic, scrambly, and relentless, attributes he merges perfectly with his never ending gas tank. We are definitely looking forward to watching this young man’s career flourish even more next year. 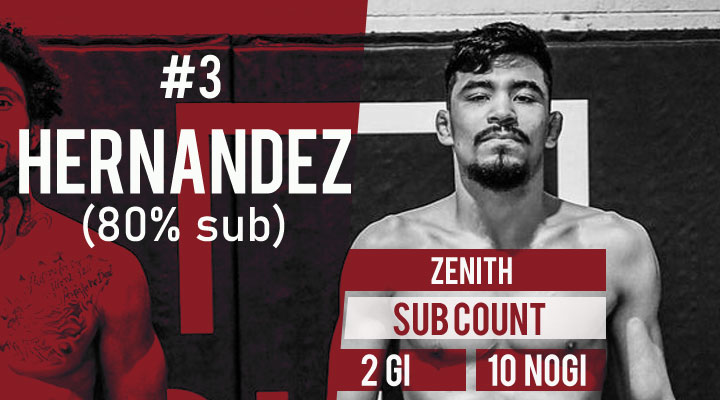 A repeat offender in the Top Finishers ranking is 25YO Emilio Hernandez. This was not an easy competitive year for the Zenith representative, with a range of wins and losses on his record. Consistency did come when searching for the finish. Gi or no-gi, it did not matter, Hernandez always competed for the finish, taking a very respectable 80% submission win ratio out of his 15 wins this year. 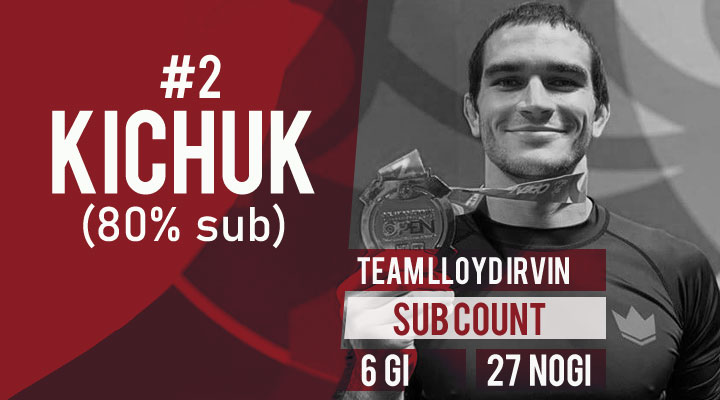 Undoubtedly one of the most impressive athletes of the year was the Silent Killer, Kieran Kichuk. We use the “silent” adjective solely because, despite his impressive list of wins, Kieran is still not as recognized as we believe he should be within the mainstream audience.

At 26 years of age (celebrated last month), the Canadian’s output this year was truly impressive. 52 matches in the gi and no-gi circuits, with submission wins over highly ranked athletes such as Paulo Gabriel, João “Bisnaga”, Francisco Cuneo, Andre Cantanhede, to name a few while conquering an 80% submission ratio. 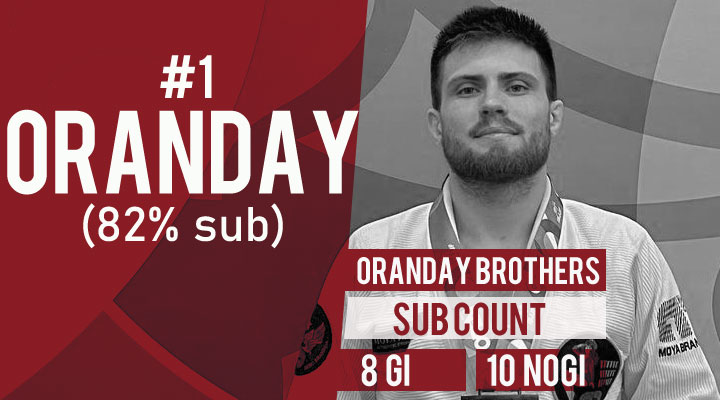 All the Top 4 athletes on this ranking are from North America, the first time this happens since we started producing these Top Finishers stats 7 years ago. A sign of the times?

Much of what we wrote about Kieran Kichuk can also be applied to Damion Oranday, as he is also one of the most underrated athletes on the professional circuit. A natural-born submission hunter, Damion does it all, but it is in the footlock game that he shines brightest. 18 submissions this year, 14 of those came from lower limb submissions.

As for how Damion fairs in between gi and no-gi, the Oranday Bros / Alliance standout is one of the most balanced grapplers on the international circuit, a statement attested by his 10 submissions in the no-gi circuit and 8 in the gi.