Where is Jiu Jitsu’s Mecca?

This “title” caused some controversy among readers, many of which perceive California as today’s place to be, if one is to make it in our sport. Granted that many big names of jiu jitsu’s black belt division reside in California today, and the bigger tournaments also take place in The Golden State, but in our opinion, what the mainstream media tends to cover, does not always reflect a sports evolutionary trends.

Although jiu jitsu has been highly neglected by media’s coverage and by sponsors in its country of origin – possibly due to its lack of BJJ lifestyle (whatever that may be), but most likely due to its weak economy – talent has not stopped growing there with every passing year.

As we were unsure of how our Sao Paulo claim translated at a lower belt level, we went on and researched the top locations where current brown belt and purple belt world medallists train, trying to find the REAL BJJ Mecca of today. One based on not only on established athletes, but the places buzzing with talent which produce world champions at a higher rate.

Obviously many athletes use different sports as training camps, particularly for Worlds and Pan Am events, usually closer to the tournament’s location. But we tried to ascertain where these athletes train year-round, to deliver the circuit that is producing more of our future black belt world champions.

Below are our findings: 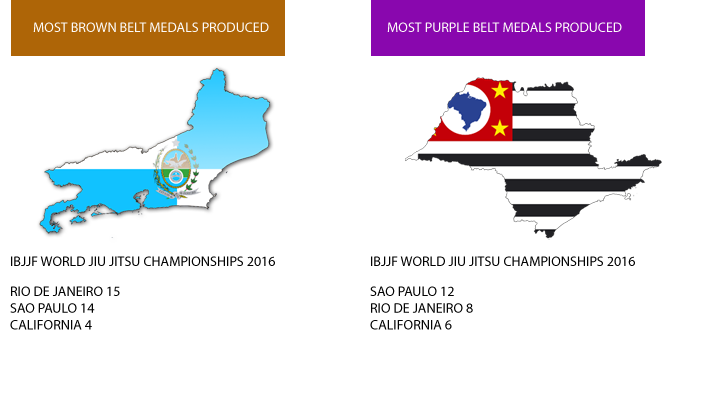 The evidence seems to point to Sao Paulo and Rio de Janeiro as the top destinations for today’s leading athletes. This is even more outlined when taking into account that the IBJJF World Championship takes place over 6000 miles (10,000 kilometers) away from any of these two Brazilian states. Add the visa difficulties and the financial struggles of a jiu jitsu athlete in a country with a falling currency, and you may understand how deep this exercise can go.

Now, there are plenty of ways to define the phrase “Mecca of Jiu Jitsu” and obviously California is home to some of jiu jitsu’s top talent, as is New York, Florida and other parts of the United States. This should in no way be used to downplay the incredible work being produced by coaches and competitors in these locations. USA and Europe are on the rise, as is Australia, that is a fact and we will see more champions from these countries and states sooner, rather than later. But the dominance of Brazil is still very clear, and (quite frankly) a bit surprising, considering the efforts being put on these countries for the past decade.