Gordon Ryan is the most talked about grappler of his generation, which means, considering how the sport is at its highest in mainstream recognition, he is likely the most talked about jiu-jitsu player of all time. Ryan’s understanding and use of social media has been an undeniable asset in his rise to BJJ stardom, but without outstanding skills, his message would not have prevailed, and it is this skill set we would like to zoom in on, on this article.

A member of the Danaher Death Squad – the name given to a group of outstanding grapplers developed by John Danaher at the Renzo Gracie Academy, Ryan started his career in the black belt division as a heel-hook expert with a nasty kimura-trap. Those days were merely an evolutionary stage as Ryan quickly developed into a more well-rounded grappler.

The fact that today’s Gordon has such a varied set of tools has allowed him to seamlessly transition from the EBI ruleset to points oriented tournaments with a success rate that had never been achieved by a submission-only specialist. It is this level of versatility that we will be addressing below, by comparing his performances in the top 3 formats he competed in: EBI, IBJJF, and ADCC.

For this project, we accounted for Ryan’s run with these three prestigious organizations (EBI* 6, 8, 11, 14 – ADCC 2017 – IBJJF World NoGi and Pans NoGi), 35 matches in total, with only 1 loss and 23 of his wins coming by way of submission. Gordon’s submission ratio across all platforms is currently:

Already the consistency across submission ratio shows impressive marks, particularly considering that both the IBJJF and ADCC tend to have ratios well below 50% on average. But so is the flow of those subs, as Ryan has masterfully circumvented the lack of heel-hook access in the IBJJF, and instead pressed on with more upper-body attacks as outlined by our graph below. 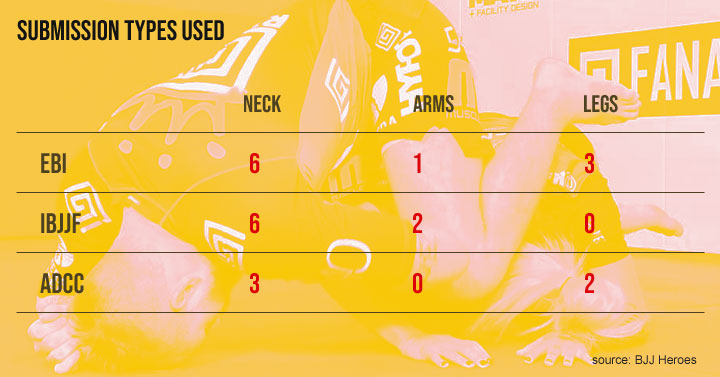 * No EBI Overtime submissions were accounted for here.

What do we mean by offense output? This is our tracking of Ryan’s preferred offensive game, what positions he uses to control his opponents on his way to victory. This allows us and our readers to discern possible strategies when entering each rule-set. We separated these between takedowns, sweeps, guard passes back control and mount.

Two things stood from the graph below, the inexistence of takedowns under the IBJJF ruleset and the low numbers of mount control in EBI. 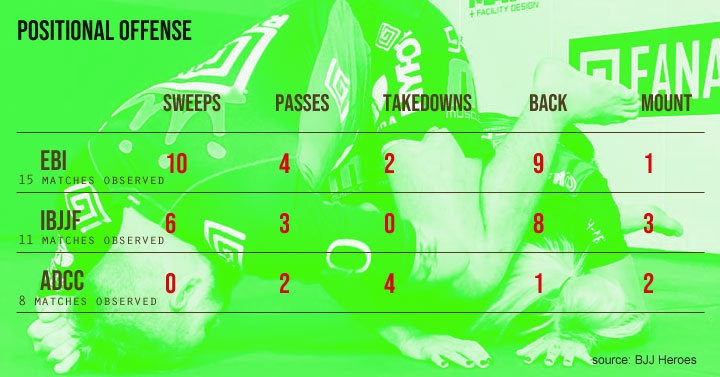 The first elements of Gordon Ryan’s genius start emerging here, in his planned approach to each rule-set.

The guard-pulling: Ryan did make a reference to a neck injury after competing at the IBJJF World Championship, which could be partly to blame for his lack of ambition on the takedown department. He did engage with a few competitors and was taken down during day 1 at the No-Gi Worlds, and considering the level of stand-up he faced, it is easy to assume that starting from the bottom was a stronger gameplan, and the perfect strategy during his path to quadruple gold (World and Pan NoGi Championships).

At the ADCC Gordon competed in a lower weight class, under a ruleset that frowns upon guard pulling, and under that scenario, Ryan’s wrestling game did shine through, as did his passing game, which he used to overcame the legendary guard of Romulo Barral and the dangerous Craig Jones.

Mount Control: By removing the point hierarchy (EBI), when giving up the mount there is a lack of incentive to regain guard. The safest option, particularly against a big name such as Ryan, is to wear out the clock and remain safe – wait for overtime. A luxury the points systems do not provide, and likely a reason why Ryan gave much more emphasis to this control under the rules of the ADCC and IBJJF.

With such success playing on the bottom, one of the most neglected aspects of Gordon Ryan’s game is his passing ability, particularly his hovering or floating style.

An interesting focus of Ryan’s progression as an athlete is how well his innovative floating pass worked during his early days at black belt in EBI, with 100% of his conquered passes coming from this position, and a good portion of his back-takes also being initiated from there.

As of late, possibly because his opponents started learning about Gordon’s game, or, also likely, due to the higher level of athletes he was facing, the floating pass has been negated and instead, a more pressure-oriented style of passing emerged from that floating exchange. 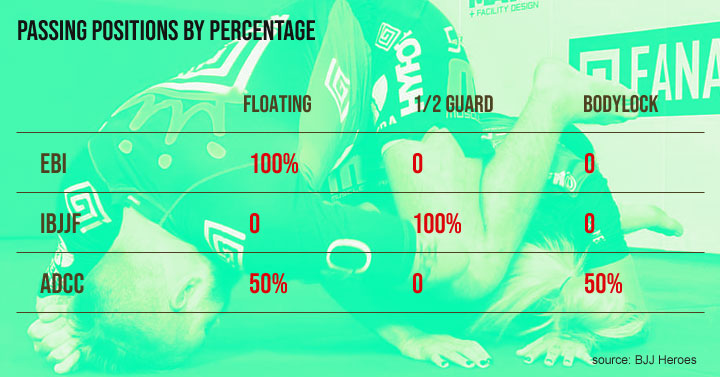 This new system has not only created an opening for the ½ guard passing but is also directly related to over half of his 18 recorded back-takes.

The butterfly guard seems to be in use across all of Gordon Ryan’s matches, in every rule-set where he found himself on the bottom. Ryan has a wide range of resources from there, from arm-drags, hook-sweeps, head control/arm-in guillotine, ankle picks and more, though his entries to the saddle position will likely be classed as his forte.

Although in EBI the saddle position was more commonly used as a control for the inside heel-hook submission, under the IBJJF rule set Ryan used this control to sweep on 5 occasions (one of those being a bear-trap), the only other sweep taking place from a reverse half-guard. 5 out of 6 sweeps from the saddle, truly impressive.

The wide range of games and technical systems operating under a solid understanding of grappling fundamentals (defense and offense), with a ton of talent and physicality to back it up has created a perfect storm and resulted in one of the most accomplished nogi competitors on the current jiu-jitsu scene.