The success of European jiu-jitsu in the sport’s global stages has not been overwhelming, to put it mildly, particularly in the men’s black belt division. One corner of Europe, however, has been the exception to this rule, that being Scandinavia.

Although small in population, this region of Northern Europe has produced some of the world’s most exciting grapplers, both in the female and male categories. The list includes Alexander Tráns (Denmark), Tommy Langaker (Norway), Espen Mathiesen (Norway), Max Lindblad (Sweden), Ida Hansson (Sweden), Janni Larsson (Sweden), to name a few. Overall, Scandinavian athletes represent the majority of IBJJF World medals for Europe over the past few years, and that pool of talent shows no signs of drying out.

Hopstock started grappling through judo, transitioning to jiu-jitsu in his early teens (2011). His breakthrough moment happened back in late 2014 when the (then) blue belt first used his trademark position, the Tarikoplata at a local event (more on the Tarikoplata here). Ever since that moment, the Frontline team standout has continuously improved on his game, being today as well known for his footlock game as he is for his own creation.

The success of his jiu-jitsu is unquestionable, 7 World Championship medals with the International Brazilian Jiu-Jitsu Federation (IBJJF), 5 with the gi, and 2 in no-gi, while also holding 12 (!) European Open medals, a possible record in the adult division. While building his medal tally in the sport’s most prestigious circuit, Hopstock has also improved his submission ratio from 2018 to 2020, particularly at the European Open, where he went from a 60% submission total (2018) to 80% back at the Euros last January. 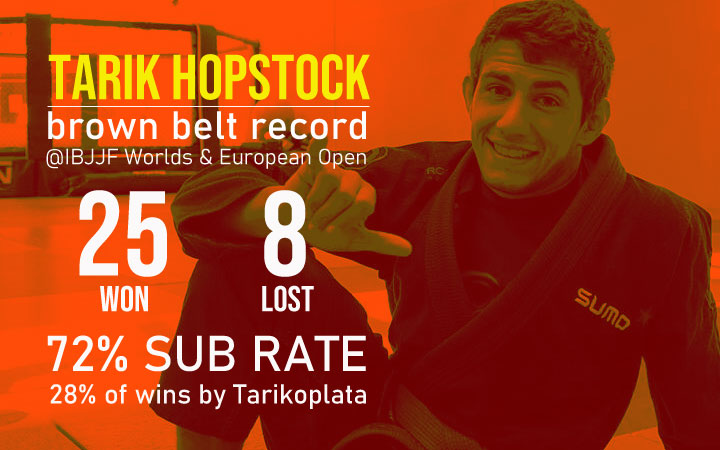 Hopstock’s style is creative, athletic, crowd-pleasing, and submission oriented, attributes that appear to be somewhat of a tradition in Norwegian jiu-jitsu, after the examples of Tommy Langaker and Espen Mathiesen. To have a full grasp of Hopstock’s impressive run at the two biggest brown belt tournaments on the international circuit, the World Jiu-Jitsu Championships, and the European Open – check his record below:

The willingness to expose himself to new ideas, and the fearlessness that Tarik possesses to test those concepts on the mat, in competition, have made of Tarik one of the most exciting prospects in the sport, one we hope to see on full display later this month at the Polaris Squads event (check details here).