5 years ago (2015) we wrote an article where we addressed gi jiu-jitsu specialists and their dominance in the gold standard of no-gi tournaments, the ADCC. The article, titled “Why Does the Gi Rule No-Gi BJJ?“, analyzed the performances of grappling specialists in each of these jiu-jitsu branches at the world-famous championship that year, and tried to make sense of the logic-defying fact that gi players were dominating the event, and had done for quite some time.

After an overwhelming performance in which gi athletes conquered 94% of medals available, we argued that what the no-gi competitor lacked was a more competitive environment from which to grow. In our reasoning, we wrote:

“The key differentiator between gi and no-gi [at the ADCC] is that the gi athlete will have been thrown against the best consistently, pushed to the limit, tested and adapted to all sorts of other highly skilled competitors on a regular basis. The chances of that happening with the no-gi specialist are fewer and far between.” Ending our assessment of the data by writing:

The solution is simple: an organized and consistent structure for no-gi specialists to test and evolve their skills. This is the challenge faced by no-gi followers for the future.

That was then, when the IBJJF and UAEJJF had the strongest grappling circuits in our sport, and gi athletes rarely played outside that structure. No-Gi athletes were forced to perform in smaller shows, competing against hobbyists and lower belts for the majority of their professional careers. Today the no-gi circuit has vastly improved, with the majority of pro-events showcasing no-gi superfights and tournaments. Polaris, Kasai, F2W, Quintet, GrappleFest, BJJ Fanatics, JitzKings, etc., there is no shortage of high-level proving grounds for no-gi specialists. As such, it is time to review the data from the past 2 ADCC events (2017, 2019) and find out if this booming branch of jiu-jitsu really is coming of age.

For our analysis, we divided players into 3 groups: Gi, No-Gi, and Hybrid. Hybrids being athletes who, although originally gi players, have not competed with the gi for over 5 years (such as Orlando Sanchez and Tom DeBlass), professional MMA fighters without a lengthy career in either grappling stream (i.e. John Salter) and athletes who came from a high-level wrestling/no-gi based background but still compete with the gi (Eliot Kelly, Paul Ardila, Abdurakhman Bilarov).

With that cleared we were left with the following numbers of athletes per category:

These numbers in themselves may not transpire much as half of the names on the ADCC roster were there by invitation, (traditionally athletes with established careers in jiu-jitsu who did not climb their way through to the big event by way of trials,) but it does show an advantage in the “body-count” by the gi players. In the past, this majority presence of the gi army translated into an overwhelming dominance in terms of a win-loss ratio, with 85% of wins in direct matches with no-gi athletes in 2015, however, things are changing.

As shown in the graph below, the win-loss ratio has drastically changed over the past 2 events, with the no-gi representatives overtaking the gi for the first time in the history of the ADCC event. 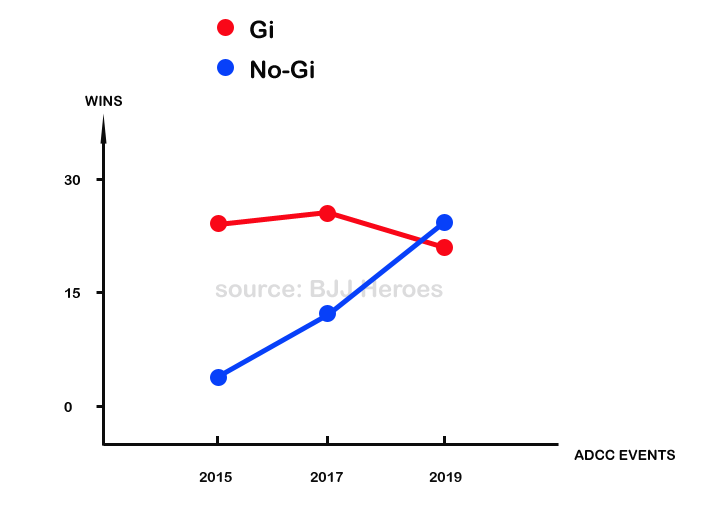 Although many could pour this change all on the shoulders of Gordon Ryan after his double gold performance of 2019, the John Danaher pupil was not alone in this undertaking. Athletes such as Lachlan Giles, Craig Jones, Jon Blank, Garry Tonon, Nicky Ryan, Richard Alarcon, Vagner Rocha, and Nick Rodriguez all chipped in, in stealing this dominance from the hands and feet of gi players.

Although winning on the direct matches against each other, gi players still managed to come away from the event with the majority of ADCCs medals. 11 to 7 podium placements for gi, though an ascending trend on that front as well, as per the graph below. 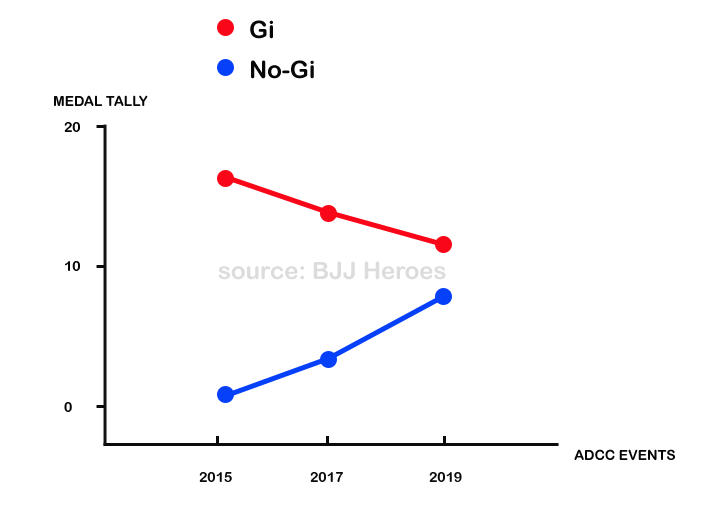 Overall, it seems as though the dominance of the gi in a no-gi world has its days numbered. The trend here, if the sport keeps its direction, is for no-gi to continue to gain terrain over gi players. Furthermore, with a deep shortage of Gi-based professional shows available in the market, we should expect to see more gi players transitioning to no-gi on a long term basis, further building on the talent already available there.