Clash of the Titans: Can Alliance’s New School Dethrone Atos at Worlds?

Over the past two years our sport’s most prestigious tournament, the International Brazilian Jiu-Jitsu Federation (IBJJF) World Championship has been dominated by the Atos Academy, a team whose squad is almost exclusively filled by two gyms – Atos Headquarters (San Diego, California) and Art of Jiu-Jitsu (Costa Mesa, California).

Atos took the control of the male adult division – arguably the ex-libris of the event, from the hands of the Alliance Academy in 2017 by 17 points, after Alliance’s 9 consecutive team wins at the tournament, from 2008 to 2016. This overtaking of Alliance continued the following year by an even larger margin, 25 points. But will the rise of Atos continue in 2019?

WHY IS ALLIANCE STRONGER THIS YEAR?

Most of the IBJJF World Championship team titles are decided in the lower belts. Comparatively to other teams such as Alliance or Gracie Barra, Atos is one of the smallest teams on the main stage in terms of network size (definitely not talent wise). To have an idea of how many top-level academies Alliance has, the main ones are Porto Alegre (Mario Reis), São Paulo (Fabio Gurgel / Michael Langhi), Leblon – RJ (Gigi Paiva), Los Angeles (Cobrinha), Charlotte (Lucas Lepri) and New York (Marcelo Garcia). These are just the main ones, then you have equally big gyms in San Diego, Manaus, etc. 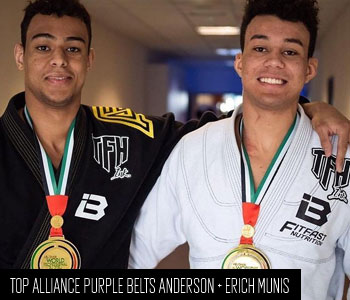 The size of one’s network will always be a major advantage in the long run, as this allows for a bigger net from where to gather talent, but the main reason for the resurgence of Alliance as the strongest candidate to the team world title is their new stable, the Dream Art Project, a new set-up led by Isaque Bahiense in São Paulo, Brazil that has gathered some of the top colored belts in the world and led them to a professional lifestyle where they eat, sleep and train under the same roof and supervision.

The strength of the Dream Art Project was on full display at the Brazilian Nationals earlier this year, with Alliance taking the win with almost double the points of the 2nd team (Cicero Costha). Much of this power has come from the recent hiring of four rising stars of the national circuit, namely brown belt Alex Munis, brothers Erich and Anderson Munis (purple belts formerly with Feijão team/NU) as well as blue belt Lucas Carvalho (formerly with Guigo JJ) who joined the already talent-rich workgroup.

WHICH AREAS HAS ALLIANCE GAINED MOST STRENGTH? 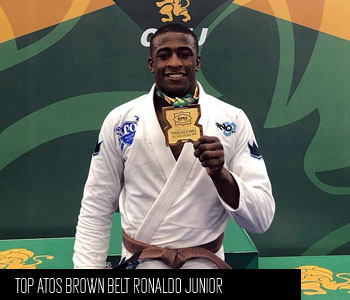 At purple belt expect a big lightweight clash between Luiz Paulo (Alliance) and Andy Masuraki (Atos), the current Brazilian and Pan champions respectively. Two athletes, we hope to see face-off for many years to come. The aforementioned Rodrigues / Dalpra are expected to do well in their new division, but they will not be the favorites for the absolute, there the favoritism will lie on Erich Munis who’s looked absolutely unstoppable this year conquering double gold at the Europeans, Pans, and Brazilian Nationals. Together with Erich, expect his brother Anderson and teammate Fabricio Andrey to be the favorites for gold in their respective divisions.

As for the brown belts… Oh boy! Talent is just as dense for both sides. Marcus Ribeiro, Gabriel Henrique, and Alex Munis lead the way for Alliance, while Johnatha Alves and Ronaldo Souza Junior will do the same for Atos.

A HISTORIC ERA IN BJJ

All in all, these are arguably the most impressive colored belts squads ever seen in our sport/martial art, the stuff legends are built on, and a rivalry that will hopefully bring us many heated matches for years to come. At this point, it is impossible to determine who will push the hardest for that precious team title. What we can say is that this will be one of the hardest fought title challenges in the history of jiu-jitsu’s World Championship and the reason why the sky is the limit for BJJ at the moment.