Who Is The Female Jiu-Jitsu GOAT?

Any debate regarding the “Greatest Of All Time” (GOAT) tends to always be a subjective one, riddled with idiosyncrasies and emotional input, but at BJJ Heroes we like to address these questions with as much objectivity as possible, and this is what we hope to produce with this article.

As far as the men’s division goes, the general GOAT consensus seems to surround three men, Roger Gracie, Marcus Almeida, and Marcelo Garcia. More recently we have seen fans make the argument for the inclusion of André Galvão in the mix, however, when discussing the female division, that general agreement seems to be lean towards 4x ADCC champion Gabrielle Garcia due to her perceived dominance in the sport over her extensive career. But this isn’t necessarily the case as the numbers paint a different story.

When deciding to tackle this project we looked at the resumes of the top athletes our sport has seen, past and present, though that gave room to another issue. Tournaments such as the ADCC only added a female division in 2005, and even then with a heavy bias towards lightweights and heavyweight athletes – the only two weight classes available. As such, we gave more emphasis on the older, more established tournament brands such as the Pan and World Championships (IBJJF), both gi events, with lesser emphasis given to the ADCC and World NoGi tournaments. With that said, here are the results:

There can be no female grappling GOAT list without Staack, literally one of the most influential figures in our sport. Staack did it all, and won it all: gi, nogi, ADCC, IBJJF, these are all among Hannette’s extensive list of achievements.

Between the ADCC, Mundial, World NoGi and Pans tournaments, Staack amalgamated over 15 medals, 10 of those being gold. She will always be seen as one of the most complete competitors our sport has seen as well as a leader on and off the mats. Staack has also built a successful career as a coach in her Brazil 021 Academy in Chicago, while also building a strong social project, teaching impoverished children in one of Rio de Janeiro’s most well-known favela’s.

Jiu-jitsu’s unstoppable force, Gabi Garcia has left a huge mark in our sport and we can undoubtedly say there was a time before Garcia, and there will be one after she hangs her gi. The most powerful competitor our sport has seen.

Her size and strength have made her nearly invulnerable in the female division, with only a handful of losses, none of which by submission. We can say with some degree of certainty that the only reason for Garcia’s “low” placement in this ranking, is the fact that she decided to pursue a career in Japanese MMA early on. This and the fact that Gabi failed a performance-enhancing drug (PED) test, which cost her her 2013 titles. Although her legacy may be considered to be blemished by this sanction, Garcia will forever be reminded as one of the “All-Time Greats”, with wins over every major player of her generation.

Ahead of her time, Leticia Ribeiro was, in our opinion, one of the most technical black belts our sport has ever seen, flair she has carried on to her wonderful coaching career at the helm of Gracie Humaitá – South Bay in California, USA.

In the light featherweight division, Ribeiro will forever be remembered for her wars with Bianca Andrade Barreto, one of the tightest rivalries the division has ever seen. Ribeiro is also a pioneer when accounting for longevity, considering she competed at the highest level in this sport for 15 years, battling different generations of greatness such as the aforementioned Barreto, as well as Sofia Amarante, Michelle Nicolini and more. 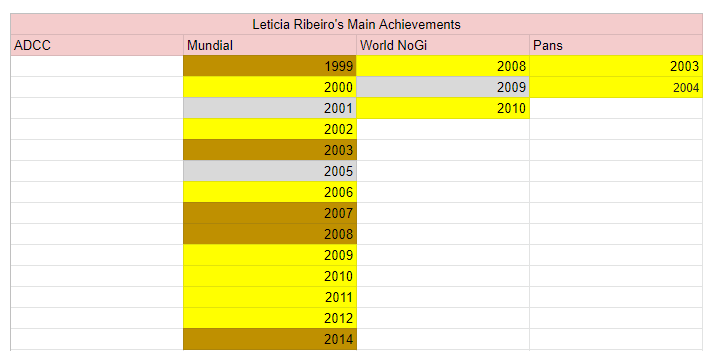 The race to the number 1 position was tight. Nicolini has all the elements to break through as our number 1 GOAT, taking into account how much she has done, both competitively and creatively, by producing a very unique style of grappling that has been revered and copied by many athletes since Michelle left the sport to go and follow her MMA career.

Another interesting element to Michelle was her drive, her willingness to test herself in any division. Being a natural featherweight, Michelle won countless open weight titles and often ventured into the middle and medium-heavy weight classes to compete against the bigger girls, a real Tasmanian Devil, always focussing on the submission.

Nicolini’s technical contributions with her shin-to-shin combination with spider-guards, still carry today the aura of being one of the most interesting and crowd-pleasing styles of all time, and her 30 medals as a black belt (combining ADCC, Mundial, No-Gi Worlds, and Pans) attest to her style’s efficiency.

Commonly known as Bia, Mesquita has truly been “in the zone” for the past decade. Her style is what many consider the “bread and butter” of jiu-jitsu. Super dangerous closed guard, fantastic back takes and a crushing armbar, all weapons she assists with one of the strongest mindsets in the game and amazing cardio.

Bia has also stood out by continuously improving her technical repertoire and accepting to test her skillset in a number of grappling rules, often foreign to her, with great success. Not always regarded as a no-gi competitor, Mesquita decided to push for that aspect of grappling in the latter years of her career, taking out an ADCC title (her first) in 2017 and an EBI rules tournament – submission only. Truly remarkable BJJ player and a role model for any aspiring BJJ competitor, considering Mesquita came from a small coastal town, outside the sport’s Mecca and climbed her way into sporting greatness, armbar by armbar. 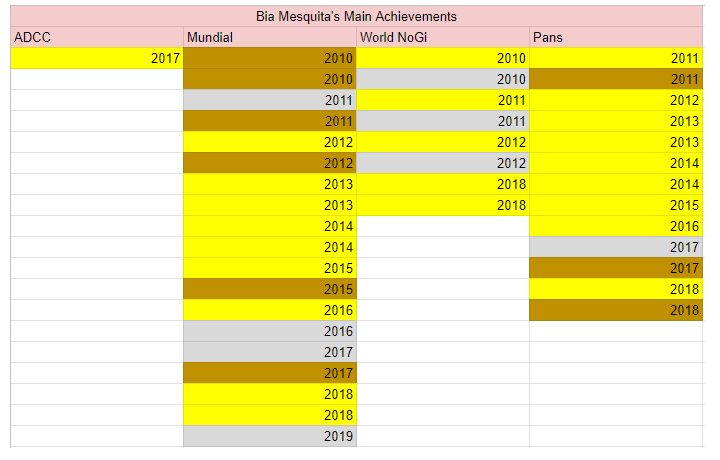