During this weekend we will witness the return of one of jiu-jitsu’s most popular professional events, the Kasai Pro, a North American promotion led by Rolles Gracie and Richard Byrne, with a focus in the no-gi facet of the sport. One of Kasai’s points of interest has been its unique ruleset, an aspect the management has continuously combined with very solid cards, line-ups that have always been committed to bringing the elite of grappling to the Kasai spotlight. Their 7th pro event is no different.

This weekend’s grappling will feature a strong 8-man heavyweight tournament, featuring 5 ADCC podium placers (2 ADCC champions), and plenty of star-power. This mini tourney will be supported by 3 strong main-event super-fights with very exciting match-ups. Below is a short description of what to expect from K7:

– Lucas ‘Hulk’ Barbosa (Athos)
Clearly committed to this tournament is Lucas Barbosa, who decided against competing at the European Open last week — one of the sport’s main tournaments of the year — to favor the K7 heavyweight GP. A bronze medal at last year’s ADCC and a multiple-time IBJJF World No-Gi champ, “The Hulk” will be one of the favorites on the card.

– Roberto ‘Cyborg’ Abreu (Fight Sports)
One of the legends of the sport is 39YO, Cyborg Abreu, a man who has won every major tournament in the grappling world, with the exception of the IBJJF World Championship (Gi).

Once known for his Tornado Guard, the modern version of Abreu has been much more wrestling and top game focussed, particularly in No-Gi. Although there is an array of thrilling match-ups here for the former ADCC open-weight champ, most fans will be hoping for a rematch with his 2019 nemesis – Nicky Rodriguez, one we hope to see this weekend as well.

– Joao Gabriel Rocha (Double Five)
The biggest man on the mat at Kasai will likely be Joao Gabriel, but if you are expecting a slow and sluggish style from the big Brazilian, you are totally mistaken. Always exciting, with excellent upper body throws and solid movement on the ground, JGR is a very solid pick for gold.

The Achilles Heel of JGR is indeed his Achilles (pun intended), as all of his submission losses in No-Gi have come from lower-limb attacks. With plenty of foot-locking specialists on deck at K7, it will be interesting to see how the Double Five team founder will cope, though judging by his last bout with heel-hooking expert Gordon Ryan (Kasai Dallas), we believe he is much improved in that regard.

– Nicky Rodriguez (Renzo Gracie Academy)
When standing, Nicky Rod’s is one of the most dangerous competitors on the card, and although he tends to prefer a very safe/ evasive style when on the ground, one that sometimes makes for uneventful matches, he is very competent at staying away from anyone’s guard game. The combination of these two attributes — strong takedowns and hard to submit/sweep will make him a very tough man to stop.

Rodriguez’s bout with Roberto Abreu at the 2019 ADCC World Championship was one of the most talked-about matches of the year, and a rematch with the Fight-Sports founder is bound to be on the cards this weekend. Very exciting times for grappling fans.

– Bruno Bastos (Team LEAD)
A veteran competitor is former Nova União standout and LEAD founder, Bruno Bastos, who had a good 2019, competing as a Masters 2 in the IBJJF circuit. Bastos is not among the favorites here, but with decades of experience and a very reliable half-guard game, Bastos can still pose a threat to a few of the tournament’s challengers.

– Patrick Gaudio (Gf Team)
Gaudio has been an unstoppable force in the international grappling circuit both with the gi and in no-gi. Always committed and always dangerous, Gaudio is a “gamer”, who is most happy in very physical grappling matches.

A scrambler by nature, Patrick plays well from top and bottom, and will be a candidate for the podium. The only thing working against Gaudio under the Kasai ruleset is his lack of commitment to the tap. This gap in his game that could cost him the edge in the group stages. Nonetheless, look for Gaudio to have a strong performance here.

– Vinny Magalhães (Gracie Tijuca)
One of the original jiu-jitsu globetrotters was Magalhães, who has traveled the world looking to perfect his grappling knowledge. From one of the most traditional schools in the sport (Gracie Humaitá) to one of the most ‘rebellious’ ones (10th Planet), Vinny has done it all.

In terms of experience, few can match what this former Ultimate Fighter tournament finalist has done in combat sports, and he is bringing the technique to match this valued asset. If there is one thing to say against Magalhães’ odds at K7 is that he’s been prone to struggle against heavy-set grapplers, and they are plentiful here. Nonetheless, on a good day, Vinny is as dangerous as they come.

– Kyle Boehm (10th Planet)
Last, but certainly not least, is Bohem. Still undefeated since earning his black belt last year is the BJJ Fanatics GP champion, a powerful athlete with a great killer instinct, particularly in the heel-hook department.

Kasai 7 will be the first time Bohem moves away from his comfort- zone (sub-only / EBI) at black belt and into a points ruleset, a variable that poses an interesting challenge to this very promising young man’s record. A rematch with Lucas ‘Hulk’ would certainly be a mouth-watering prospect the fans, one we hope to see this weekend. 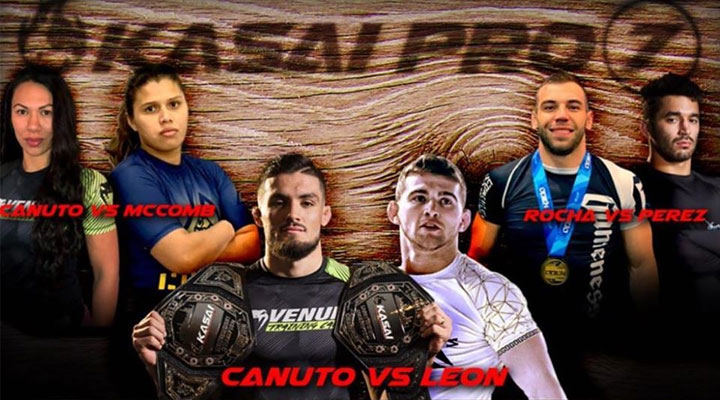 Renato Canuto vs Dante Leon
The match-up all Canuto/Leon fans were hoping for is here. Following up on their highly competitive 2019 match at Kasai Super Series, the two fire breathing grapplers are set to battle again. Given how even their match was, it is impossible to choose a favorite, though we can certainly expect one heck of a match.

Raquel Paaluhi Canuto vs Gabrielle McComb
Another fantastic match-up is Canuto x McComb, two grapplers well known for their gritty jiu-jitsu styles. Gabi is one of the sport’s top scramblers, but she will have a tough hill to climb against the Hawaiian, Raquel.

A 2x World No-Gi Champion, with tons of combat experience and top-notch wrestling, Paaluhi Canuto is also the bigger of the two and the favorite here. However. never count McComb out as she has made a career out of her “Never Say Die” attitude. This match has “fireworks” written all over.

Mike Perez vs Pedro Rocha
ADCC veteran Perez will have his hands full against Rocha of Double Five. A former Navy officer, a freestyle wrestling Brazilian champion, and a black belt in BJJ, Rocha will pose some interesting threats to the Atos competitor.