Lucas Lepri Versus The World: Dissecting The Game of The Lightweight GOAT

BJJ Heroes,
8.89K 0
Lucas Lepri Versus The World: Dissecting The Game of The Lightweight GOAT

Lucas Lepri (full profile here) is one of the most revered International Brazilian Jiu-Jitsu Federation (IBJJF) World Champions, and although there have been other articles written about his greatness, none, that we could find, has gone to the finer details of this man’s career, and game.

From the very get-go, Lucas Lepri seemed destined for greatness, going on to win his first black belt world title in his debut year in the division (2007). But for those who think his path to GOAT status was an easy one, nothing could be further from the truth as his debut year was followed by a few years of shortcomings.

After a few years of disappointing performances, in 2014 Lepri finally got his grip back on the division, becoming the most dominant lightweight of all time from then on, with his reign still lasting today. Although some have been quick to point out that Lepri did lose this year, to Levi Jones-Leary, at the European Open, these fans also seem to look past that (, without taking anything away from Levi,) the 33-year-old had had a very, very tough day in the absolute division, beating the 300 lbs + athlete Seif Houmine as well as much larger opponents such as Kaynan Duarte and Renan Marcel prior to meeting.

But back to Lepri, one of the most remarkable things in Lucas Lepri has been his unaltered game, a well-known style based on relentless pressure and precise back takes.

Over the years we have seen many champions attempt to reinvent their games, we saw that with Rafael Mendes, who transitioned from being a 50/50 guard player to the berimbolo, later the crab-ride and leg drag. We’ve seen the Miyao brothers move from a strictly bottom game to a serious passing prowess, Meregali’s masterful DLR to an incredibly solid toreada passer, and so on and so forth. In Lepri’s case, his solid use of grappling fundamentals have allowed him to remain at the very top of the sport with a largely unaltered game, and this is what we will dissect below.

– Lepri will only pull guard to press the action, and never to stall: In the 14 high-level matches observed, Lucas pulled guard 4x when the match was at a stalemate while standing, and only once when he was ahead on points (against Najmi), but even when he pulled guard while ahead on points, he used the pull to sweep and advance position, later getting a tap.

– Nearly Impossible To Score: Lepri’s motto is “be precise”, and indeed he is. One of the strongest assets of his game is how hard it is to score on the veteran. The last two people to score on Lepri at the Mundial were JT Torres (2016) and Athos Miranda (2018), Torres’ score coming from a passivity call by the referee, which went to both athletes, and in Miranda’s case a knee tap from a poorly timed guard pull, although Lepri did win both matches, submitting Athos and topping Torres on the advantage board.

– Position Over Submission: Lepri does not usually hunt for the submission early on in his matches, he works on improving his position methodically without deviating one inch from this structure. If he is forced to go one step back, he does so only to reset and get back to this same process, over and over, until he gets to checkmate. This strategy has gotten Lepri an impressive average of 7 points per match, at the biggest and toughest tournament in the world.

While assessing Lucas Lepri’s scoring, we can see how dominant the top game in relation to his overall strategy. This is also applicable to his submission game, given that he finishes twice as often from a passing stance, other than his guard – ‘Plan B’. 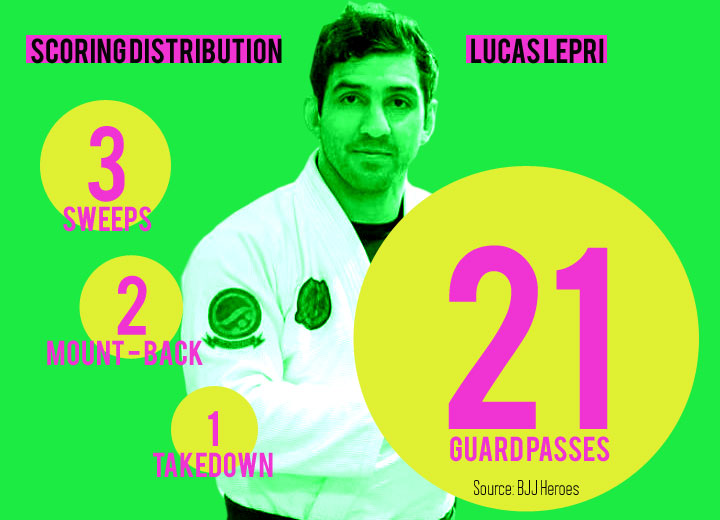 Maybe the most interesting aspect of this whole report is how Lucas Lepri passes, which links in with our previous statement of sticking to the game plan. Lepri only uses 2 guard passes, which he interlinks with surgical precision. Time and time again, Lucas switches between knee-slide to leg-weave passes. Adding more points on the board with a piercing knee on belly. 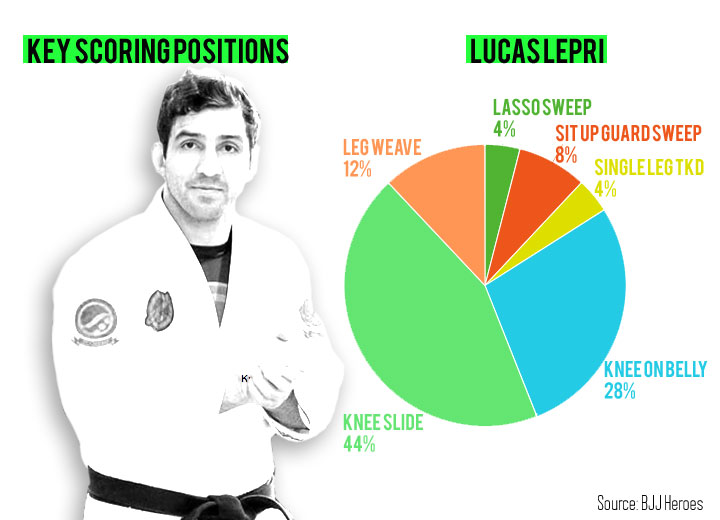 This never-ending sequence of knee-slide, leg-weave, knee-on-belly does often force his opponents to expose the back but seldomly does Lepri uses the back as a point scoring position. Only once in the matches observed did the world champ secure the 4 points from a back take. Instead, once Lepri gets a scent of the back, he goes straight for the ‘kill’ and forces the finish, with almost total disregard for the scoring hooks.

And there you have it. Not only is Lucas Lepri the king of precision, but he is also an athlete who has managed to clean off any ‘excess baggage’ in terms of technique. His game is streamlined to the most minute detail, with simple options that suit his game in every variable that is thrown his way.