Ivan Gomes: The Man The Gracies Didn’t Want To Fight

The Gomes brothers (Ivan, José and Jaildo) were among the most important jiu jitsu + vale-tudo figures of the 1960’s. An era that built the profiles of legendary men such as Carlson Gracie, Euclides Pereira and of course Ivan Gomes, the eldest of the Gomes brothers.

Ivan and José made their names fighting no-holds-barred (today’s MMA) in the Northeastern states of Brazil, away from the Gracie family buzz. A region with a very unique jiu jitsu history, one where Takeo Yano and George Gracie were the true disseminators of this grappling style.

Takeo Yano, who taught George Gracie, Biuson Osmar and Agatangelo Braga (Ivan Gomes’ coach), did not follow Jigoro Kano’s Kodokan doctrine – the style of Mitsuyo Maeda. Instead, Yano was a navy man and an expert in the Bukoku-kai style. The big difference between the two being that Kodokan was geared towards a grappling sporting environment, while Bukoku-kai leaned towards vale-tudo and hand-to-hand combat.

The brothers started training martial arts in the 1950’s, learning striking and a limited amount of no-holds-barred moves. A few years later they met Zé Maria, pupil of Nilo Veloso (who himself was a black belt under George Gracie):

“Our first contact with a real jiu jitsu black belt was in 1957, his name was Zé Maria. He showed up in Paraíba to promote an event but ended up staying for a whole year. As he left, Agatangelo Braga arrived. Agatangelo was the brother in law of Osmar Mozinho de Oliveira [“Biuson” Osmar], they had both trained under Takeo Yano. (…) Zé Maria was very technical on the ground, and taught us the Kodokan style that he had learned. Braga on the other hand, was more of a fighter. He was a fan of vale-tudo, being from Yano’s lineage, and saw great potential in my brother Ivan. He gave my brother his black belt in 1960″ *. 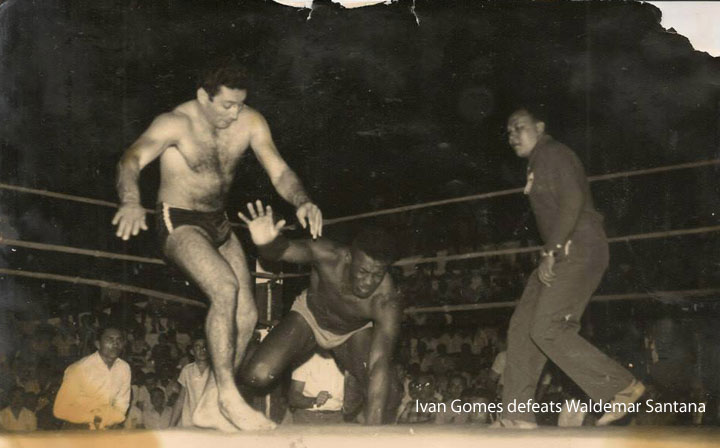 At the time jiu jitsu’s belt system was slightly different, with no blue belts in the equation the rank went from white > yellow > orange > green > purple > brown > black, and according to Mr José Gomes there were no degrees. Another interesting aspect of jiu jitsu culture in the 1960s was the “clear distinction between amateur black belts and professional black belts. The amateurs would train the kodokan style [strictly grappling]. Professionals would be porradeiros [brawlers], we would train for the ring” *. 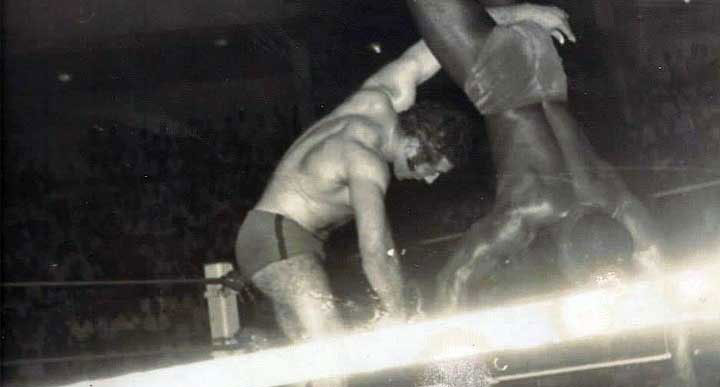 The ring was indeed where the Gomes brothers thrived. In 1960 Ivan and José left Agatangelo Braga and moved to Recife, capital of Brazil’s northeastern state of Pernambuco where they rejoined Zé Maria. Zé had a big gym there with over 30 black belts, and the chances to fight higher level guys was much improved in Pernambuco. 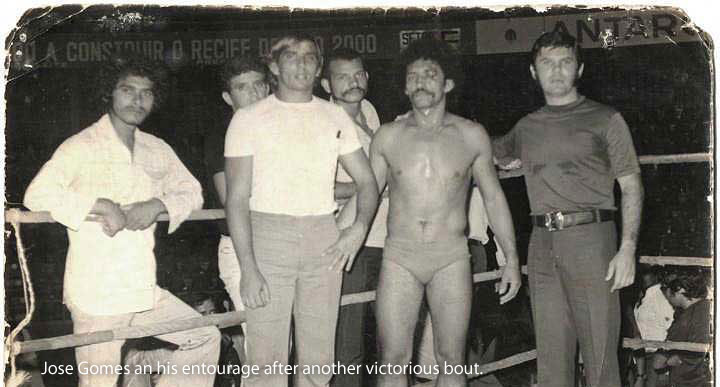 Their first experiences in NHB were fighting matches inside their own academies, against challengers from different gyms. Late in 1960 a new TV channel emerged with a show that would elevate the status of fighting. Channel 2 (today known in the region as SBT). That broadcaster started a new fight promotion named Bolsa ao Vencedor (roughly translating to “Prize Money to the Winner”), where the top vale-tudo fighters would meet for a chance to earn cash.

“We had to fight a few preliminary matches to make it to the main card and earn money. It was tough, 4 rounds of 2 minutes” *. José Gomes wasn’t a black belt at the time, contrary to most other competitors. He remembers mentioning to his brother Ivan that he wasn’t sure if he could compete at that level. His brother replied “You beat up 3 or 4 guys in the ring, your worries won’t be in what level you are at, they will be in finding an opponent, because they will all run away from you” *. His brother’s prophecy did come true. As José Gomes piled up a positive record, promoters would have to find matches for him with out of state fighters who hadn’t heard of his reputation. José fought twenty times from 1961-1964 in Bolsa ao Vencedor, ending his run there with a 18-2 record.

Ivan Gomes remained undefeated, becoming the biggest name in the organisation. Even so, he found it hard to live solely from his fighting income, leaving coach Zé Maria in 1961 to open his own place, where he could maximize his hard earned reputation.

While Ivan led the Gomes’ gym, José (a brown belt then) left to Sao Paulo in an attempt to make a living there as a professional boxer. After relentless pressure from his mother, he decided to return and continue training alongside his brother. Returning to grappling after a few months off wasn’t easy, particularly when he was paired up with Francisco Sá, one of the toughest ground experts in the region. During one of their training sessions José got caught by a mean guillotine and was forced to tap. Ivan, who stood by, lost his temper and yelled “how can a black belt tap to that choke? this is a disgrace!” José was sad he had let his brother down, but understood what that telling off meant… He had just been promoted to black belt, that was Ivan’s way, no ceremonies or celebrations.

In 1964 Ivan went to Rio de Janeiro to fight Juarez Ferreira. He had been promised a match against Carlson Gracie, where he to beat Ferreira.

Ivan had fought Carlson back in 1962, but wanted a rematch. The rules of their previous bout were “finish or draw”, and although Ivan didn’t finish Carlson, the Gracie always mentioned Gomes as the toughest opponent of his career.

Ivan KO’ed Juarez in less than 1 minute of the 1st round via takedown (kataguruma), but he did not get the match he wanted. Instead Gomes was offered a partnership with the Gracies. Today the common story is that Gomes went to Rio to stay at the Gracie academy and learn from the famous grappling family, but his brother José says nothing could be further from the truth: “He didn’t learn anything there. Reality is, he taught them a whole lot”. He continued “People often ask me if we learned from the Gracies. I always say, everything we know came from the Japanese. Geo Omori, Takeo Yano, the Ono brothers, etc. Carlos and Helio didn’t invent a thing. The best Gracie out there was George, by a landslide. He left the Gracies to train mainly under Yano, and the Ono brothers. He was the true family champion.” * 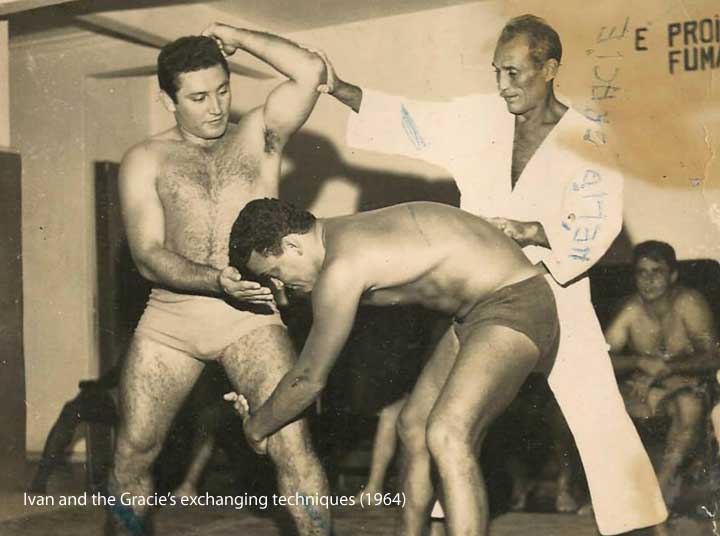 Carlson and Ivan opened an academy together in 1965, though Carlson didn’t stick around for long: “The academy was left on the hands of my brother. It was more of a payment for my brother agreeing not to fight them. They even made my brother sign a document on the notary’s office, saying that he wouldn’t. I still have the paperwork for it.” *

Ivan remained in Rio de Janeiro up until 1967, returning to the northeast then, leaving the younger brother Jaildo in charge. Jaildo who would later coach the famous Romero “Jacare” Cavalcanti at his school. 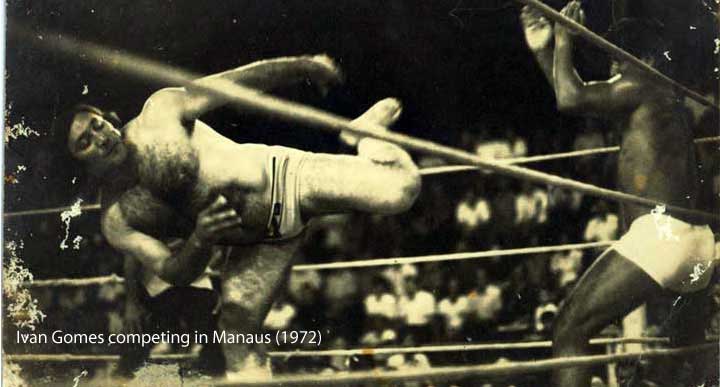 Ivan Gomes fought many times, all the way up to the late 1970’s, moving to Japan in 1975, hired by Antonio Inoki, where he became a big star. José Gomes remained in Pernambuco, creating an association for the brothers unique style, which he called the Traditional Ivan Gomes Style Federation. He still teaches today his jiu jitsu techniques geared for no-holds-barred.

* Extracted from a series of interviews performed by BJJ Heroes with José Gomes’ during the first half 2016.