Is Wrestling The Key to ADCC Success?

Analyzing the use of wrestling in jiu-jitsu's biggest event.
BJJ Heroes,
7.75K 0
Is Wrestling The Key to ADCC Success?

Earlier this year BJJ Heroes published an article where we focussed on the subject of takedowns and throws in ‘gi jiu-jitsu’ (here). While doing another piece about the stand-up game could be perceived as flogging a dead horse, due to the many overlapping elements between gi and no-gi, there is also plenty of divide between those two, enough to warrant further investigation. Keep reading and you might be surprised at how far these two grappling environments have come apart in recent years.

While we are on the subject of discussing previous essays, 4 years ago, we ran a research piece on how rules changed the dynamics of a match, a piece ‘cleverly’ entitled, How Rules Change Jiu-Jitsu (here), going through IBJJF, EBI, ADCC, and GPC tournaments. Back then our match sample was smaller but the results were surprising. Considering how far no-gi has grown since then, and the fact that the ADCC is back this year made us return to this subject, going through with a fine tooth comb, the past two editions of the ADCC World Championship (2015/2017). 190 matches.

FROM STANDING TO THE GROUND

Right off the bat, when comparing the numbers of takedowns, one can see how the IBJJF and ADCC are worlds apart:

As reported on our Gi Takedowns essay, data from the World Championship showed a 14% match-takedown ratio under this set-up; the ADCC showed 41% by this same metric, almost three times higher. A conclusion reached without taking into consideration that a vast number of takedowns accounted for in the IBJJF ratio came from failed guard pull attempts, arguably not “real” takedowns, an idiosyncratic circumstance not observed under the ADCC ruleset.

On a side note, as an example of how far this takedown mindset is embedded into ADCC culture, even the 66-kilogram division (which encompasses athletes who would compete in the IBJJF as Light-Feather and Featherweights) recorded nearly 5 times more takedowns than those achieved by these same divisions under an IBJJF setting.

Yet another point of comparison between these two organizations is which throws or takedowns are most used under each of the IBJJF and ADCC rulesets. Is there an overlap? Data shows that, even here, there are substantial differences. With rules that frown on guard pulling in the ADCC, positions such as ankle picks, for example, are almost inexistent.

Obviously, there is more than one reason for these results, the absence of guard pulls (or the much lower numbers of those), influences players in their stance and their approach to tie-ups. Gi grips make level changes all the more difficult, and double legs become much harder to perform and set-up with the gi. Remove the gi-grip and double legs rule the game. There is, however, the peculiar case of the single leg, which is the most used takedown on either environment. We believe the main reason for this occurrence is the familiarity gi players have with this maneuver, moreover when shooting from the outside. A practice witnessed in abundance under both rulesets. 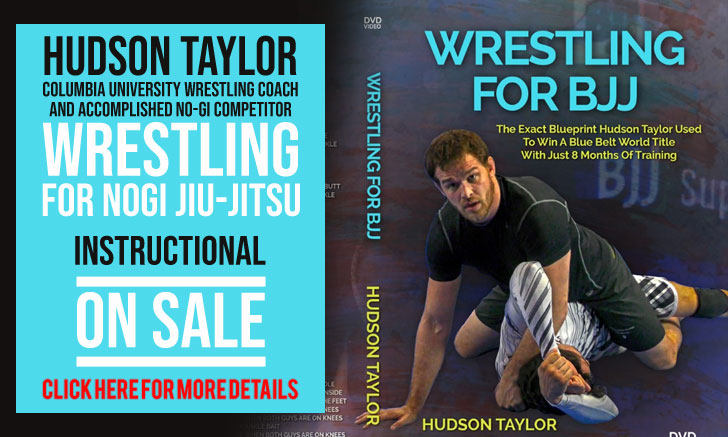 As we have advocated on another BJJ Heroes study about the importance of scoring first (here), whoever controls the scoreboard, controls the tempo of a match, with the likelihood of a victorious outcome increasing substantially once that is established. In an environment where guard pulling may lead to a penalty, being the better man standing is a gigantic asset. This, however, does not necessarily translate solely to the takedown itself as we will see below.

While observing those 190 aforementioned ADCC matches we accounted for 282 successful forward moving maneuvers (E.N.: excluding submissions), meaning, offense such as sweeps, back control, guard passes, mount position, etc. Out of these maneuvers 78 (28% overall) were takedowns or throws, but the influence of wrestling did not rest here: Back control from an incomplete takedown scramble was recorded 23 times, being the 2nd most effective method to get to the back, and a total of 116 of the recorded actions were accomplished by the direct influence of a wrestling-based exchange. 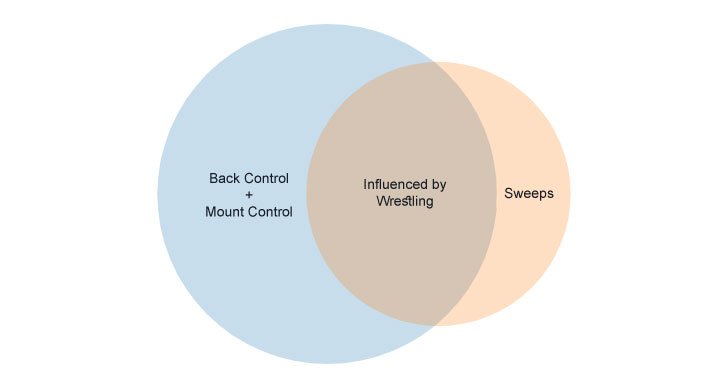 On those 116 exchanges we have also included wrestling from the bottom, a style of play that has been already pointed out by leg locking master, Craig Jones, as the possible route of expansion for modern no-gi jiu-jitsu, in a recent interview to FloGrappling. What we mean by “wrestling from the bottom” is setting up sweeping triggers that will end with the guard player in a wrestling style finish, i.e.: sweeping attempt ending in a double leg, single leg, body-lock, etc.

Out of 55 sweeps recorded, 15 of those ended by way of ‘wrestling’. To give you an idea of how important that is, this type of sweep was the most utilized path to a reversal, ahead of the ½ guard, the DLR, reverse DLR, closed guard, etc. and not by a small margin either.

So is wrestling the key to ADCC success? One could definitely make a case for it, and it seems as though most high-level grapplers these days are focussing much of their training time to the wrestling game ahead of this year’s big event. Time will tell if this is a fad or the real path for no-gi grappling.