Jacob Couch, commonly known as The Hillbilly Hammer, is a professional grappler and a jiu-jitsu black belt under Heath Pedigo of the Pedigo Submission Fighting team, a squad also labeled as The Daisy Fresh. Couch first made waves in the sport as a colored belt, competing against veteran names of the sport, successfully, in submission-grappling’s professional events while also conquering numerous gold medals on the International Brazilian Jiu-Jitsu Federation (IBJJF) and the Abu Dhabi Jiu-Jitsu Pro circuits.

Nickname: Unlike the traditional Brazilian/Portuguese nicknames, whose origins tend to be based on banter among friends and/or family, Couch’s nickname, The Hillbilly Hammer spawns from a combat sports tradition, a promotional name with less of a backstory, aside from Jacob’s place of birth and job description.

Competitive sports entered Couch’s life in 6th grade when he joined the A.B. Combs Elementary School’s football team. Although he loved the sport, he was forced to quit the team due to lack of transportation, but the love for the challenge remained very much alive in his heart.

Jacob joined his school’s wrestling team as a freshman. A short-lived experience that lasted 3 months, prior to him finding out about submission-grappling.

When Couch was 15 years old he became a target of bullying. Seeing his struggles, two friends of Jacob – brothers Ken and Stone Beverly – suggested that he should join a local MMA gym, which he enjoyed from the get-go. Despite his lack of financial resources, Jacob was allowed to pay half-fee so he could train.

At the mixed martial arts gym, Jacob started learning jiu-jitsu under the guidance of Donald Neace, who saw Couch through to the blue belt level, and later with Adam Gomez.

In 2019, while at the IBJJF No-Gi Pan American Championship, Jacob Couch befriended a few students of Heath Pedigo. These newfound friends invited the Kentucky native to come and train with them at their (now famous) training room in Mount Vernon, Illinois, even offering to drive Couch there, as the young athlete did not own a vehicle.

Couch visited the Daisy Fresh facility – Pedigo Submission Fighting – in 2019 where his relationship with the workgroup grew even stronger, leading to his decision to stay and move to Illinois. Jacob was a purple belt at the time.

While training at Pedigo Submission Fighting, with some of the top athletes in the nation, Couch’s grappling skills shined through even further than they had in the past. After multiple successes in the colored belt divisions, coach Heath Pedigo promoted his student, Jacob Couch, to the rank of black belt. A celebration that took place while The Hillbilly Hammer stood on the podium of the IBJJF No-Gi World Championship, on December 15, 2022. 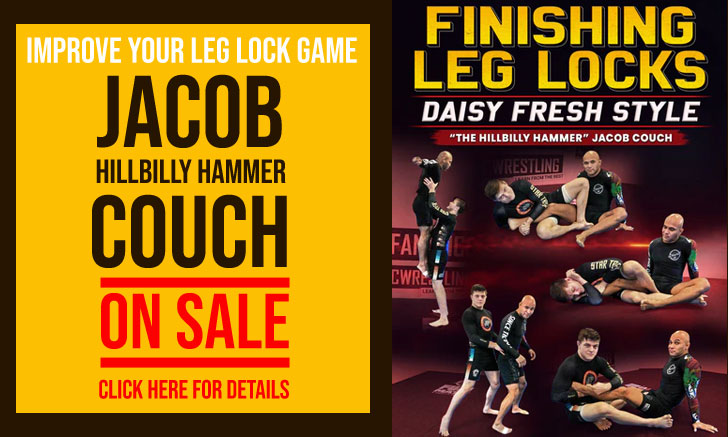 Traditionally BJJ Heroes has only accounted for an athlete’s individual black belt matches in our record displays as they signify an athlete’s entry into our sport’s elite division. Jacob Couch, however, is a special case as he’s been competing against and beating top-shelf athletes in the pro-grappling circuit since he was a colored belt. This has left BJJ Heroes with a delicate predicament of defining when to start accounting for the young prodigy’s match records.

As we saw some of these matches as a fundamental part of Jacob’s entrance into the sport’s rankings, we have opted to include all his pro-division matches from brown belt onwards, on our display (see below). The reader of this page is to keep in mind that every match prior to 2022 was fought when The Hillbilly Hammer was still a colored belt.