Kyle Boehm is a professional grappler, a black belt under the 10th Planet system and a student of John Botello, leader of the team’s Phoenix, AZ affiliate. Boehm also worked extensively with Geo and Richie Martinez of 10th Planet Oceanside while making a name for himself, competing in the North American submission-only tournament circuit where Kyle conquered numerous titles, beating big names of the sport such as Kaynan Duarte, Dan Borovic, Tex Johnson to name a few.

Kyle Boehm was born on April 19, 1987, in Escondido, California, United States of America.

Rock climbing was Kyle’s first sporting interest, an activity he started at the age of 9, going o to compete at a national level during his early twenties. While climbing, Boehm added several competitive sports to his training schedule throughout the years.

During middle-school, Kyle was involved in 5 sports on a competitive level, namely, cross country running, wrestling, basketball, track & field, and soccer. This high pace was kept when in high school, with football, basketball, and track, while maintaining his climbing tradition. Boehm’s love for the outdoors also led him to the top of the Aconcagua (the highest mountain outside of Asia) in Argentina at the age of 17.

After 2 years of playing rugby in college at the Northern Arizona University (NAU) Kyle Boehm turned to mixed martial arts (MMA), where he amassed a record of 3-0-0 before deciding to learn jiu-jitsu as a way to improve his overall cage fighting skills. Bohem’s first formal jiu-jitsu practice took place in December 2014, with John Botello, a black belt under Eddie Bravo, and the head coach at the 10th planet Academy in Phoenix.

Being a natural athlete, Boehm immediately took a shine to grappling and started doing very well on the local competition scene, soon moving to professional level submission-only events in 2016. With repeated success on several different platforms and wins over some of the big names of the sport during this period as a colored belt, his promotion to black belt was inevitable. The ceremony, led by Kyle’s long-time coach – John Botello, took place in October 2019. 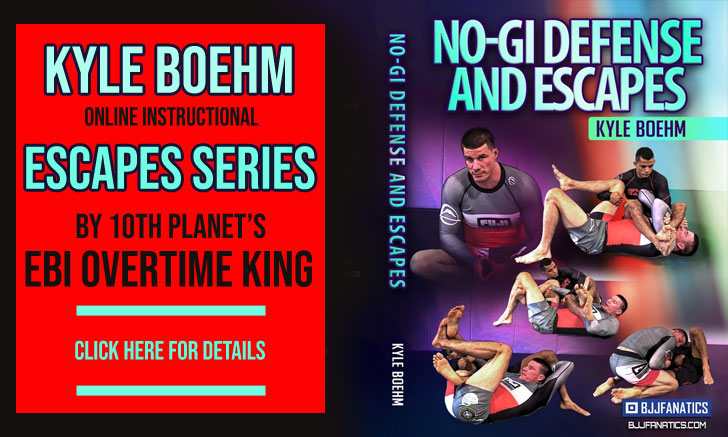