SEPTEMBER 23, 2017 Espoo – Finland. The first day of the biggest no-gi jiu jitsu (submission wrestling) tournament in the world, the ADCC which is spread across two days. The tournament gathered some of the very best grappling competitors in the world through a series of trials run through all continents, also bringing talent in by invitation.

One of the positive notes worthy of mention was the whole outlook of the tournament, which was a few steps above previous events. Excellent mats, professional scoreboards and intelligent refereeing. Thumbs up! 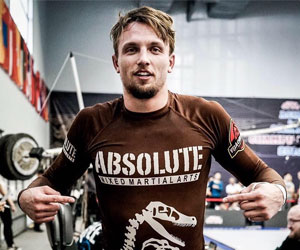 As per usual the tournament started at full speed, given that the first day of the tournament has traditionally brings more submissions than the semis/finals day. From all weight classes, the 88 kg – referenced by many (us included) as the ‘Group of Death‘ brought many surprising and amazing matches. The athlete who stood out the most was Craig Jones of Australia’s Absolute MMA, who was the revelation of the day and arguably of the year with his performance. Jones submitted both 5x IBJJF World Champion Leandro Lo and old school star Murilo Santana to reach the semi finals of the event.

Craig JonesJones and Gordon Ryan showed a more submission oriented game, dethroning the ‘old school’ ADCC (AKA sloppy wrestling and a reluctance to play guard) with forward pressing guard games. On the other side of the brackets  was the ‘last standing samurai’ of the old school, Xande Ribeiro who will be competing against Gordon tomorrow. The legendary former ADCC champion submitted both his opponents – John Slater and Rustam Chsiev with ease.

Another warrior performance was that of AJ Agazarm who single handedly defeated two DDS athletes in newcomer – and youngest athlete to ever enter the ADCC finals tournament Nicky Ryan and Ethan Crelinsten. In the 1/4 finals Agazarm hurt one of his ribs during a scramble and was in serious pain for most of the match, but managed to push through and come out the victor with a two point lead.

Below are the individual results for the ADCC elimination rounds. Tomorrow we will have the semi finals, finals and ADCC division.