ADCC Teams Report By The Numbers

There were many battles at play in the ADCC World Championship this weekend, and one of those was the return of team rivalry in jiu-jitsu, a subject that has been somewhat dormant in our sport over the past few years.

Much of this attrition between grappling’s top teams has been down to social media interaction between a few of the top players in each camp, but it had also plenty to do with the different training approaches at play in no-gi’s most important tournament. Be that the submission oriented focus by the Renzo Gracie Academy and 10th Planet, the more passing/wrestling heavy approach seen in the Atos Jiu-Jitsu camp or the more traditional outlook of the Alliance Academy.

When assessing head-to-head clashes, we have to look into the numbers of athletes. It is worth noticing that all teams did not start off from a neutral line since some had bigger numbers of representatives. The caveat here is that whenever there was more than 1 team member on a weight class, the promotors forced a team-mate vs team-mate clash either in round 1 or round 2. With that said, below are the numbers of athletes.

* We included Craig Jones on the Renzo Gracie Academy representatives given how much time the Australian spends with John Danaher’s crew. Jones is traditionally an Absolute MMA competitor.

** We included Patrick Gaudio to the Fight Sports team on account of his extended training camp with the Florida based team.

A quick assessment of each team’s win-loss account shows Atos and Renzo Gracie’s Academy leading the pack, closely followed by Alliance. These teams truly dominated the tournament, taking 14 medals out of the 24 that were available. More on that below, but first the total wins/losses record. 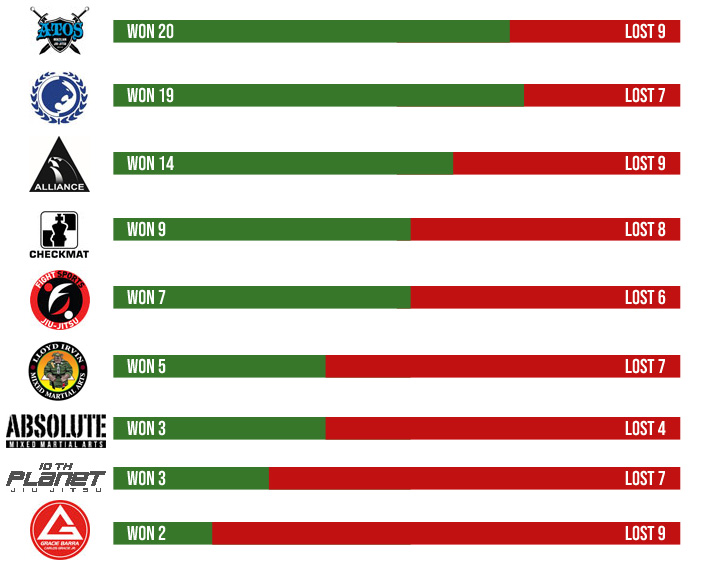 As aforementioned, these teams also dominated the podium with a few exceptions, one of those coming from the remarkable performance of Lachlan Giles, the leader of the Australian team, Absolute MMA who placed in the open-weight division, being the very first member of AMMA to earn his place on the ADCC podium. We could just as easily say Absolute MMA medalled two athletes, considering how much Craig Jones works with the team, either way, this was a wonderful year for the Australian workgroup.

Also making its debut on the podium stands was the 10th Planet Academy, who saw the spectacular performances of Elvira Karpponen rewarded with a bronze medal, the first of the well-known team.

Below are the team podium stands.

When assessing head-to-head matches, we looked into the top three teams, Atos, Renzo Gracie Academy, and Alliance, which were well balanced, with a slight edge to Alliance.

It is important to note that none of these matches went to a decision, all clear wins for either, with one submission win for Team Renzo Gracie – Gordon Ryan vs Vinicius Trator and Alliance’s Kennedy Maciel who submitted Tye Ruotolo.

When it came down to submission hunting, one team did come out with a substantial advantage, namely the Renzo Gracie Academy which more than doubled the submissions of the runner-up in this submission race. In fact, RGA had more submissions than the 2nd, 3rd, and 4th ranked teams combined.

During the event, there were also complaints regarding a possible judge’s bias towards one team, the most vocal of these critiques coming from Fight Sports team leader Roberto Abreu. This did not appear to be the case as all top-ranked teams showed a decent balance of wins by decision. If there was a case to be made, however, that would be for team Checkmat, who did have a few tough losses in very close matches, though none that appeared to display blatant signs of favoritism to either team, in our opinion.

So there you have it, the ADCC Teams report, a very balanced playing field where the world’s top camps went “neck and neck” to the finish line. It is interesting to unveil how so many different coaching styles and approaches to the game can clash with no clear-cut winner in the most wide-ranging ruleset in grappling, which is the ADCC.