Set forApril 2016, the 6th edition of the Eddie Bravo Invitational (EBI 6) is finally complete, with it’s last contestant being Lucas Rocha of Gracie Barra. This will be the first time the famous event, created by 10th Planet Jiu Jitsu founder Eddie Bravo, will be promoting an open weight division.

Known in the grappling circuit as one of the top “submission only” style events in the world, EBI has recently gathered the curiosity of the Ultimate Fighting Championship’s (UFC) executives, who purchased the rights to broadcast the event through the organization’s digital subscription service: “UFC FIGHT PASS”. A gigantic step for EBI and jiu jitsu as a sport, since it opens the doors of 1000’s of mixed martial arts (MMA) enthusiasts to high level grappling.

In preparation for the UFC FIGHT PASS debut, EBI has gone above and beyond it’s previous showings by providing a possible US$50,000 cash prize, having also summoned some of the biggest names in jiu jitsu today. EBI 6 is providing a very interesting mix of gi & no-gi specialists as well as “points” and “submission only” athletes, which should have advocates of both factions of the grappling world on the edge of their seats.

With the date set for Sunday April 24 from The Orpheum in downtown LA, EBI 6 has now confirmed their card. Although previously scheduled to be a 16 men tournament, the organization has only revealed 15 athletes, stating the card is full, possibly leaving space for a special guess closer to the start of the tournament.

(1) Jimmy Friedrich: Atos
Friedrich is a brown belt under Andre Galvao and is coming out of a bronze medal at the IBJJF Pan American championship in the brown belt division. Jimmy is regarded as one of the top grappling prospects in the US grappling scene, and has competed in the ADCC.

(16) Jacen Flynn
We don’t know too much about Flynn. Sherdog mentions a positive MMA record with a win over Denis Kang and Dean Lister by split decision (Lister avenged that loss by way of kimura). Jacen seems to have a high submission ratio in MMA, and is said to have won the Gracie Nationals. 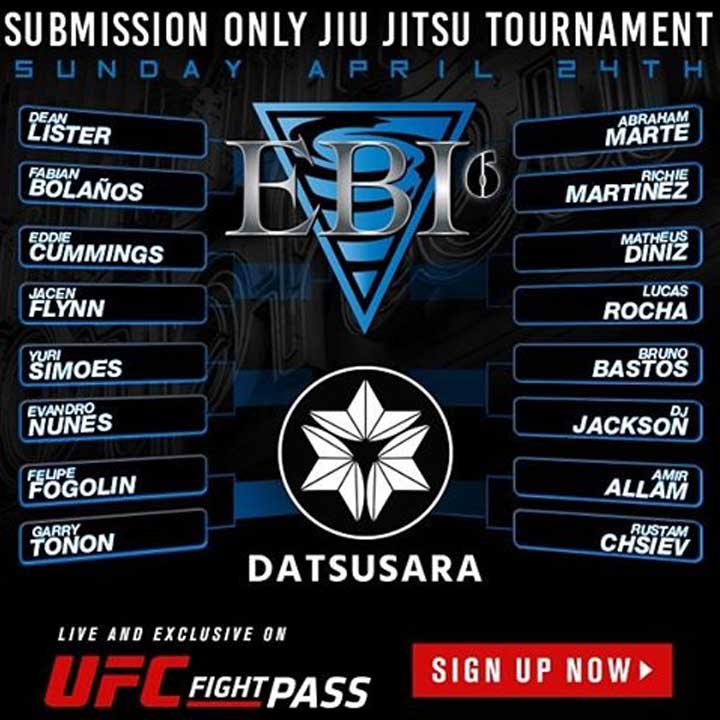