Set for Friday, March 15, 2019, is the 9th edition of the Polaris Jiu-Jitsu Invitational, an event that has shaped up to be, arguably, the most talent dense set-up ever assembled by the British based professional grappling promotion.

One of the main matches to watch will be the clash between two grappling legends, namely Rafael Lovato Junior and Jake Shields. If the outstanding style clash and grappling pedigree of these two weren’t enough, the match may have strong implications for Polaris’ light-heavyweight division, particularly if Rafael Lovato Junior takes the “W”, as he would be the perfect challenger for Craig Jones’ LHW strap.

Further down on the card is a match, we believe, has the perfect recipe to steal the show and get the FOTN praise; That is the Vagner Rocha versus Ross Nicholls face-off. A fantastic style match-up between two grapplers on the rise in the promotion, with a proven record of producing high-level entertainment. Match-making at its best.

The card is in fact so stacked that most of the prelims matches could easily belong on any high-level main event of our sport, so much so that the organizers have decided to add two ‘In-Venue Only’ matches, which will be officially announced very soon. 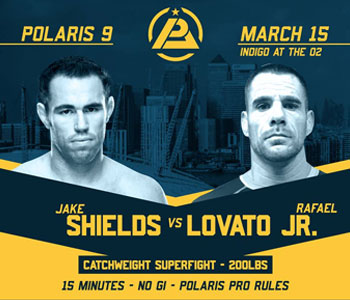 JAKE SHIELDS vs. RAFAEL LOVATO JR.
90.7KG/200lbs NOGI
A huge match between two of the best grapplers ever produced by the United States and a perfect style clash. Shields is an absolute legend of the sport and has been a real asset for grappling in mixed martial arts (MMA), but the odds will be stacked against him at Polaris when facing a fellow jiu-jitsu legend and MMA fighter in Rafael Lovato Junior.

RLJ is a larger, more experienced and has a longer list of accolades under grappling rules in comparison, though the grinding style of Shields is incredibly hard to figure out, as some of his recent list of victims will have you think (i.e. Murilo Santana, Durinho Burns, Dillon Danis, etc). It will be very interesting to watch and see if Rafael can take Jake down – his easiest path to victory. If he fails at this, expect this to be much more even bout than the disparity in grappling accolades would have you believe. 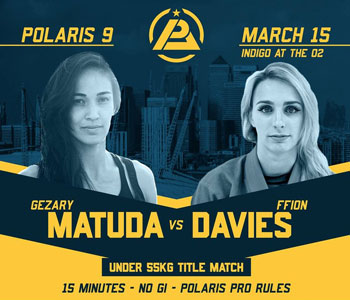 GEZARY MATUDA vs. FFION DAVIES
56.6KG/125lbs NOGI
We dedicated a post to this match when it was announced, and we are as excited now as we were then about the clash. Two outstanding competitors who know nothing other than press the gas pedal and hunt for the submission.

Matuda is coming in with the superior experience, resume, and well-roundedness, while Davis will have the ferocity of an athlete trying to make a name for herself and a very strong top game. The accomplished Welsh grappler has also been adding plenty of competition time in nogi as of late. Who takes this one is a complete riddle. 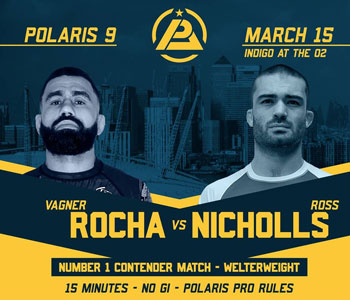 VAGNER ROCHA vs. ROSS NICHOLLS
77.1KG/170lbs NOGI – Welterweight Title Challenger Spot
Another perfect clash of styles between the old school grit of Rocha and Nicholls fluid leg-locking game. Hard to pull a favorite here, Rocha is certainly more accomplished in this sport, having been exposed to the toughest opponents, though this may be exactly the type of match Nicholls needs to climb higher on the ladder of worldwide recognition.

Both competitors have enough tools to submit each other, Vagner likes to move forward and push the pace, while Ross shines brighter when playing on the counter-attack. We are very excited about this match, which has the added benefit of selecting who will challenge Mansher Khera for the Polaris Invitational WW title. 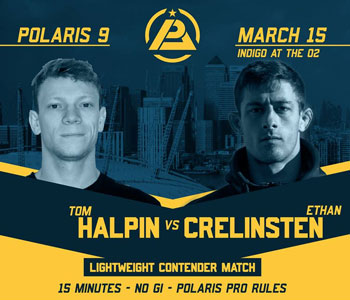 This will be Halpin’s third Polaris Invitational, after two matches with the promotion, which proved to be dominant performances by the Fight-Sports representative. A match with Ethan, however, will be a very different test to Tom’s skills and an excellent match between two leg-lock specialists. 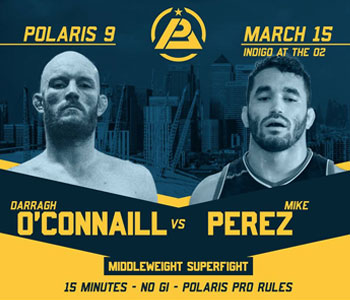 DARRAGH O’CONNAIL vs. MIKE PEREZ
83.9KG/185lbs NOGI
Cleaver match-making on Polaris’ behalf once again. Both Darragh and Michael are well known for favoring an exciting match over a result. Known for his powerful guillotine and versatility, Irish grappler is a current IBJJF European NoGi champion, while the American is a multiple time ADCC veteran and a very experienced competitor for his age.

Perez became famous as a purple belt while competing in the nogi circuit of the United States, a time when he earned numerous medals under a variety of rule-sets. Well versed in lower limb submissions and a big fan of the scramble, we will be expecting Mike to leave the guard pulling to O’Connail. We also expect lots of movement from the Atos representative, and a more methodical approach by the East Coast team founder. 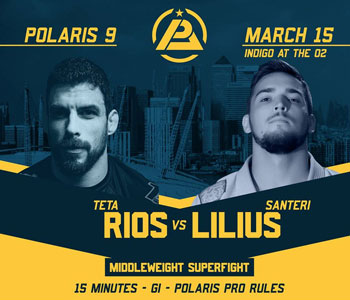 EDUARDO RIOS vs. SANTERI LILIUS
83.9KG/185lbs NOGI
One of the most recognizable figures in European jiu-jitsu is Rios, co-founder of Frontline and a multiple time IBJJF European NoGi Champion at black belt. He will be facing Santeri Lilius, a veteran of Polaris with two matches and an even record of 1W-1L.

Hard to predict the result of this match-up. Eduardo “Teta” is well rounded and a tough opponent for Lilius in any position, though he is not particularly a specialist at 50/50 Guard, something Santeri has used extensively in his 2 previous outings.

In this generational clash of BJJ experts, expect Teta to be the more active grappler on the mat, with Santeri ready implement the modern style of jiu-jitsu.

The list of match-ups on Polaris 9s preliminary rounds is a testament to how stacked this card really is. Almost any of these fights would make a headline at the majority of professional BJJ cards out there, particularly Brosche x Langaker, Dias x Sawada and Hostock x O’Flanagan. All of these guys are either rising or established stars in our sport and have the style and skill level to lift the crowd. Hopstock and Irish heel-hooking machine Eoghan has all the elements for match-of-the-night, though all remaining bouts are also top-shelf picks.