ADCC 2022 Teams Report By The Numbers

As we have done in the past (check here for reference) BJJ Heroes has gathered the stats not only of athletes and their individual performances but also the numbers behind the separate teams that competed at the 2022 ADCC World Championships to ascertain which were the strongest and weakest camps at the upper echelon on submission grappling. The topic of this article will be the Team Versus Team issue, if you are searching for overall stats/data of the tournament, check here or, if you are looking for the 2022 ADCC Results, check here.

Teams have always played a gigantic role in the sport of jiu-jitsu, a trend that has been almost forcefully pressed down as the top media companies in the sport push for individual personalities and persecute team closeouts and other team-friendly BJJ traditions. For full disclosure, we at BJJ Heroes understand how close-outs can hinder the sport, while also appreciating a good Team x Team rivalry, something that is (likely) deeply rooted in the soccer/football culture we grew up in.

From a more thoughtful standpoint, one of the most interesting aspects of these team x team dissections is to assess which training philosophy brings higher rates of success. As you may know, each team approaches its camps differently, with the emphasis on strategies, training philosophies, and techniques varying greatly in some, and not so much in others.

We can see different approaches to training in teams like Atos and New Wave, whose athletes do share similarities in the fact that these camps produce very well-rounded players, but vary greatly in their approach to the game. For example, in the wrestling department, Atos focuses a lot more on leg attacks to take their opponents to the floor as opposed to New Wave being vastly more prone to upper body throws and trips. These different patterns are also seen in the approach to guard playing or to passing and can be bridged across to the many teams that competed at the 2022 ADCC World Championships.

WHICH TEAM BROUGHT THE BIGGEST ARMY?

When assessing head-to-head clashes, we have to first look at the number of athletes each squad brought forth to address the fact that not all teams started off from the same position in this race. A key factor for success is the starting point.

WHO HAD THE BEST WIN RATIO?

A quick assessment of each team’s win-loss ratio* shows very similar results to those of 2019 with Atos leading the pack. André Galvão‘s team is then closely followed by JT Torres‘ camp – Essential Jiu-Jitsu – which, interestingly, is also closely linked with the Atos squad given how Torres captained San Diego’s Blue Shield, prior to his move to the East Coast where he opened Essential.

At close range from the two leaders of this metric are John Danaher‘s outstanding pupils and Fight Sports who benefited from having two strong hubs in Manaus and Miami, bringing in talent. A double sword attack, if you may. 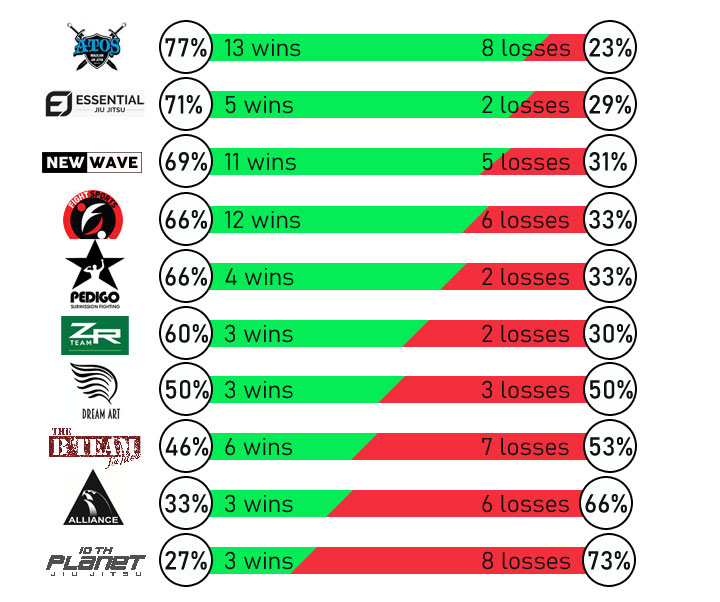 A few teams were left out from this graphic due to space. For clarity, we also had Team Gracie Barra with 45% wins and 55% losses, Checkmat 40% wins and 60% losses, Caio Terra Association (CTA) 50/50%, and other smaller teams in numbers of matches.

The graph shows big decreases in performance for teams like Alliance who ranked #3 using this same metric back in 2019 but is now one place from the bottom, while 10th Planet remains one of the poorest performers of this ruleset, again, after a second from bottom placement in 2019 it is now at the end of the ADCC team ladder.

* We accounted for solely matches within the same weight categories for the sake of fairness, given how uneven some of the open weight class matches can be.

MOST WINNING TEAM AT ADCC 2022

There are many ways to address the question of “Best Team Performance” in the ADCC World Championships. If we remove the ratios/percentages of wins versus losses and look only at match wins, we will see a different picture.

Top 3 Teams With Most Wins*:

* We accounted for solely matches within the same weight categories for the sake of fairness, given how uneven some of the open weight class matches can be.

As you can confirm through our graphic, the ranking changes drastically between the #2 and #3 ranked teams as Essential Jiu-Jitsu is removed from the frame. This is not only a matter of quality within the teams but also largely down to EJJ being a small squad (3 athletes) who could not, mathematically, reach the numbers of wins seen in the larger squads.

Surprisingly to some, Atos still remains at the top in this metric, a trend that you will spot throughout this article.

Other teams worth mentioning in this metric are the B-Team with 6 victories, Essential JJ with 5, and Pedigo SF with 4 wins.

MEDAL TALLY AT ADCC BY TEAM

So, who had the biggest medal count of the 2022 ADCC? You probably guessed it, it was San Diego’s Atos squad, repeating what they had done back in 2019 with similar numbers of medals (5) though swapping one of their previous gold medals for a bronze this year.

Atos is very closely followed by John Danaher’s New Wave (to whom we apologize for not having their real logo – we couldn’t find it) who snatched 4 medals (2 gold) as did Fight Sports (1 gold). 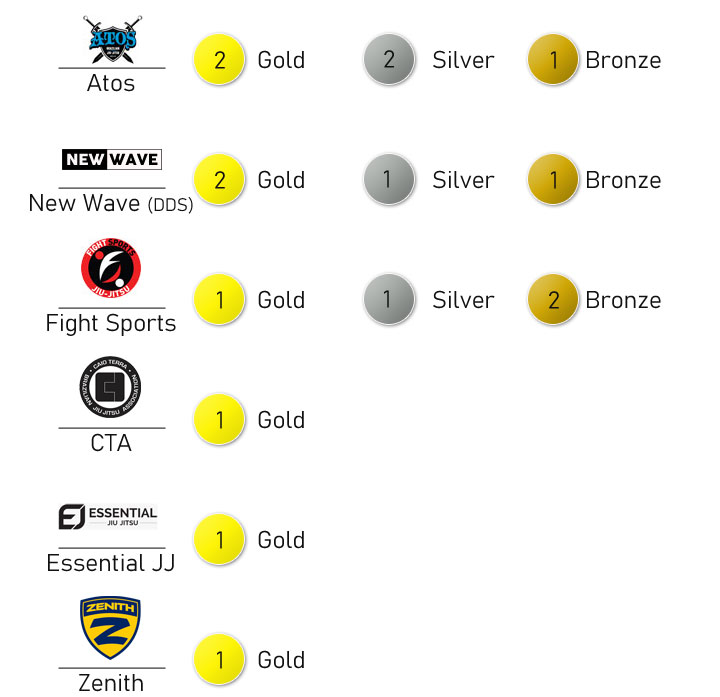 TOP COACHES OF THE ADCC

Teams alone can tell us part of the value inherent in having the backing of a well-known squad in preparation for a big event like this, but a logo alone won’t win many matches. We should also address the numbers looking outside of the flag and into the camps that define success as many big teams often operate with separate gyms and coaches as seen in squads like Gracie Barra, who have camps in Texas, Minas Gerais, and California, or 10th Planet athletes who are spread between Eddie Bravo’s HQ, the Martinez Brothers’ gym, and their Las Vegas affiliate, to name a few.

When addressing individual camps/workgroups we still see André Galvão and the Atos Headquarters team riding the grappling wave. An astonishing feat, considering the ADCC is not the main ruleset the team prepares for, with many athletes actively competing in IBJJF in the gi and in other IBJJF settings. This includes members of their ADCC squad like medalists Rafaela Guedes, Tye Ruotolo, and Lucas Hulk. 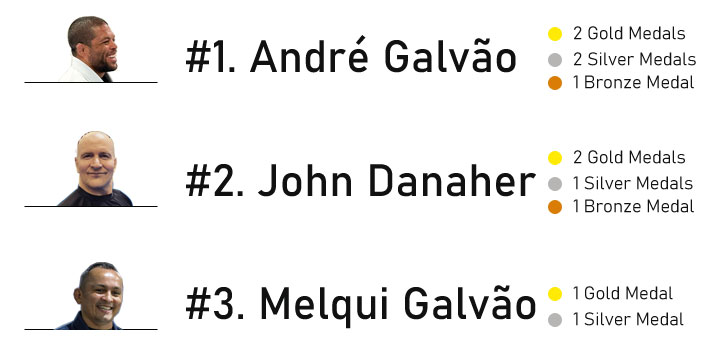 André’s number one position as the most successful coach to come out of this ADCC event is closely followed by Danaher who has also been at the forefront of no-gi jiu-jitsu for quite some time.

The outlier here, or “new kid in the block” is Melqui Galvão of Manaus, Brazil. Unlike the other two instructors on the board, who mainly train athletes who arrived at their gyms in advanced or semi-advanced stages in their careers, Melqui’s squad is 100% made by him, from white to black belt. In that regard, Mr. Galvão is the most impressive name of the lot and big credit should be given to the incredible quality of his work. He, who also brought the youngest workgroup to the tournament.

The, however, one metric where André Galvão and the Atos squad were surpassed. That was in the number of submissions. This consolation prize went to New Wave with 7 submissions overall, 8 if we take into account Gordon Ryan‘s performance in the Absolute Super Fight, outside of the tournament but still part of the ADCC event.

Overall, we saw another close battle for grappling hegemony between Atos Jiu-Jitsu and the former DDS workgroup, recently re-branded to New Wave – one of the most interesting team rivalries in the sport – with a slight edge going to the San Diego-based club, and Fight Sports slowly but firmly entering the discussion with their new crop of talent from Manaus.