October 10, 2022. Over the past few years, few athletes have been more influential to jiu-jitsu than Poland’s Adam Wardzinski, a peculiar figure for the sport on the European continent, a land where legends of submission grappling are still scarce but growing in numbers.

Wardzinski’s style is unique because he isn’t using novel techniques to stand out from the crowd, like so many other top-tier athletes. Instead, Adam has followed the same “rice-and-beans” method that saw him through repeated medals at the IBJJF European Open from 2013 – as a purple belt – all the way through to 2022. A style that is heavily reliant on butterfly guard and single-leg X transitions which he binds to an outstanding heavy-pressure passing game from half-guard and quarter-mount.

The intricacies of Wardzinski’s game have long been dissected by masterminds of the game such as BJJ Scout, or in Adam’s BJJ Fanatics instructionals. Still, while running through the numbers of the latest big gi tournaments we did find Wardzinski’s name com through repeatedly which propelled us to write this article.

One of the big stats to take into account is that out of every hook sweep accounted for over the past 4 IBJJF World Championships (2018, 2019, 2021, 2022), 38% came from the hands and feet of Wardzinski. This is a pretty big number if we consider two things: The first is that Adam was knocked out of the tournament in the first round in 2018 and was unable to use this position and second, how versatile and universally used this position is in the sport. 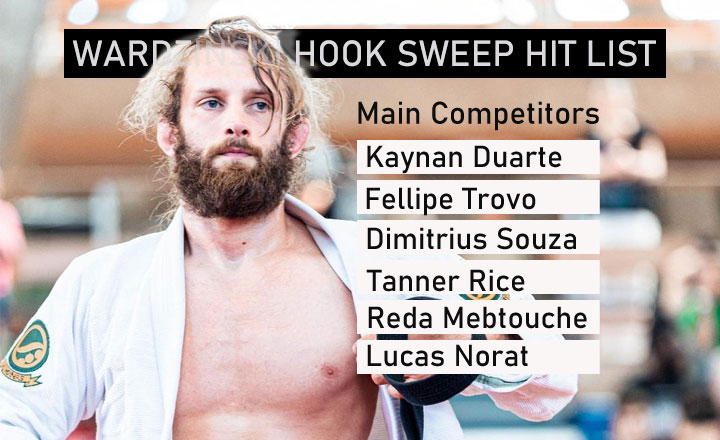 Although the butterfly sweep has been a big part of the sport’s history with many of the sport’s biggest past icons being heavily reliant on this maneuver – read, Marcelo Garcia, Tererê, Leo Santos, Royler Gracie, Sergio Bolão, Jean Jacques Machado, etc – the sweep had lost it’s “edge” in the sport as the new generations turned towards novel sweeps from De La Riva and Reverse De La Riva hooks and wrestle ups over the past few years.

Wardzinski’s use of the over-hook belt grip and his combination with the single-leg X guard to “Dump In The Trash” style of sweeping shined a light on this style of grappling and the numbers have grown in terms of usage since being reintroduced to the sport by way of Poland’s masterful guard player. This much has been made evident in big tournaments such as the ADCC where these maneuvers were successfully used on 5 occasions. A big number for a tournament where sweeps are scarce (see our analysis of the ADCCs numbers here).

The rising generation that is currently climbing the ranks of grappling appears to be much more receptive to the use of the butterfly guard as a key element to their game as seen in athletes like Amy Campo, Pedro Machado, Osamah Almarwai, to name a few.