The question “which is the best age to start jiu-jitsu?” has been well debated, including by BJJ Heroes in our piece – When Should Kids Start Practicing Martial Arts? (link here to read), when we addressed the issue from the vantage point of a child psychologist.

Today we explore the starting age concept from a different angle: Is there a pattern in the starting age of jiu-jitsu’s top-level athletes? This was the question we hoped to answer when we started looking at the numbers for this study.

There are many ways to classify success, for this particular piece, we addressed the grade by using solely IBJJF World Champions in our maths, the gold standard of our sport. Gathering data from the very first “Worlds” event back in 1996 up until 2019, across all divisions, male and female.

Before going through the data, a few pointers as to how we addressed the numerical hic-ups that come with collecting the precise starting age of certain athletes. World champions such as Royler Gracie, Chiquinho Cuiabá, or Mackenzie Dern started practicing from the toddler age, with the exact year being lost in time, for those we generalized the term “toddler” as the phase after infancy, setting the age at 4. For those who remembered starting in BJJ during their “pre-adolescence”, we set the age at 12. Now the data.

Percentage-wise, when combining the number of athletes who started in their infancy and comparing female and male world champs, the data appears to be similar, the bigger disparities are found on the other extreme – the oldest starting ages:

On the men’s camp, only two competitors who started training after their 20s ever made it to the top of the Worlds podium steps, these athletes were Rubens Charles “Cobrinha”, who started at the age of 21, and Fabricio Werdum, who started around his 20th birthday.

On the female camp, at least 23% of world champions initiated the art after their 20th birthday. We reference “at least” as there were 10 world champ’s whose age we could not determine with accuracy. The eldest starting ages here being those of Karen Antunes and Venla Luukkonen (23).

These differences are clearly outlined when addressing the average of every black belt world champion, per event, splitting the two genders. 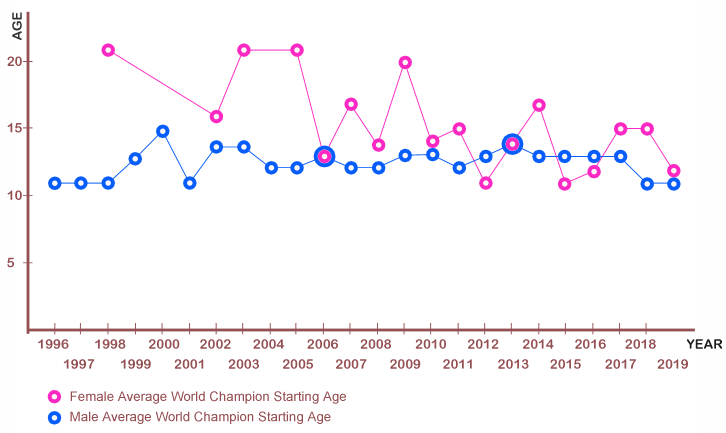 The average age seems to be steadily between the 11 and 14 years of age mark, across all weight classes, particularly in relation to the male division, a category that was well established by 1996, with professional athletes, the year when the “Mundial” was formed. This is in contrast with its female counterpart who only more recently added depth to their talent pool at a professional level.

This growth of the female division can also be directly correlated to that same 11 to 14-year-old parameter, albeit with slightly higher age ranges. It is clearly noticeable that as the female division added professional depth to their division, the starting age average started falling, further feeding into the idea that this may be an important age group for those planning to achieve greatness in this sport. 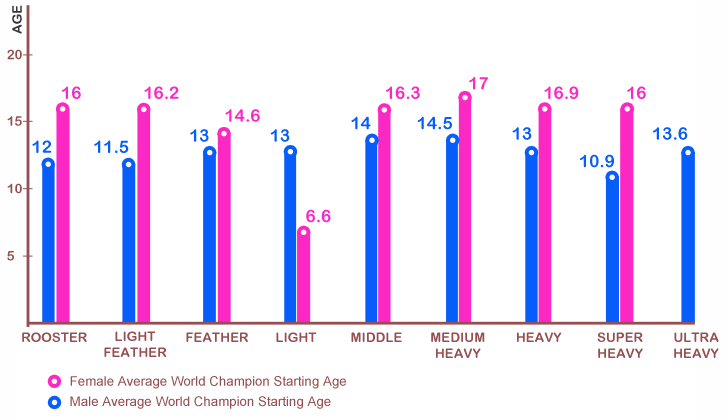 Another interesting detail captured by the data is that of the female lightweight division, the weight class with the youngest starting age in the sport. Much of that number (6.6) is down to the sheer dominance of Beatriz Mesquita in the division, who holds 7 world lightweight titles there (32% of all lightweight titles ever awarded by the IBJJF). Mesquita who started grappling as a toddler. Prior to Beatriz, other athletes with a young start such as Kyra Gracie (11) and Luanna Alzuguir (9) also conquered this weight class, which drastically brought the numbers down when comparing to other weight classes. It is also worth outlining that this has been historically one of the more talent dense divisions in the female category.

In the men’s divisions, the age range appears even, with the super-heavy taking a slight lead on the earliest starting average. Much of this lead is down to Roger Gracie – the division’s most prominent champion, who started training young with his family, as well as Antônio Braga Neto and Ricardo Libório who also won gold medals at super-heavy.

Even though this is a small sample of slightly over 100 people, there seems to be a very obvious pattern here, ranging from pre-teens to early teens as the starting age in BJJ at the highest level of this grappling sport. There is, however, a caveat. A decent percentage of these champions did arrive at jiu-jitsu from past sporting experiences, with judo and soccer being the most mentioned among these champs, therefore, there could be more to the formula. In our research, we could not find an exact pattern with this second layer of information.