SEPTEMBER 17, 2020 – It is not often that BJJ Heroes dedicates a whole article to a duo of 17-year-old purple belts, in fact, this might be the first time we do but bear with us. Kade Ruotolo and Tye Ruotolo are not your average 17YO, nor are they your average purple belt.

Born in 2003, in Hawaii but raised in California, the Ruotolos started competing as toddlers and have been praised by jiu-jitsu fans since their childhood days, when they first started dominating the local grappling scene. Growing up they were particularly known for their very acrobatic yet technical games, incredibly evolved for kids of their age.

Effortlessly strong on the image front, the Ruotolos talent and laid back personas outside the mats, where they appear to spend their time in between boards – skating and surfing, earned the interest of RVCA, a global surfing clothing company, who first sponsored the twins when they were just 10 years old.

Understanding their potential for the sport, Kade and Tye trained at a few different gyms while growing up, in search of the perfect home. They found it in San Diego’s Atos Headquarters Academy with professor André Galvão in 2016, then joining as green belts. In SD, training with some of the best coaches and training partners in the world, the twins reached a new level of success, particularly in the no-gi facet of the sport, an area that, up until 2019, was not often associated with the Ruotolo brand.

Their first taste of high-level no-gi action came by in November 2018, at the East Coast ADCC Trials in New Jersey, where 15-year-old blue belt Tye Ruotolo made waves by reaching the semi-final, defeating an array of adult pro-athletes. More focussed on the ADCC ruleset, the brothers returned a few months later to the West Coast trials, and although they did not leave with a medal, their performances turned a few heads their way, including those of the event’s match-makers who invited Tye to the main show in Anaheim, on September 2019, where Ruotolo once again impressed by reaching another semi-final, being the youngest athlete to ever reach that late-round in the prestigious tournament.

After a fantastic year, in December 2019 coach André Galvão promoted the brothers to purple belt. Since then the Ruotolos have been on a tear in the no-gi circuit, competing against seasoned top-ranked veterans, the cream of the crop in our sport, with continued and improved success, overjoying fans with their forward-moving, gritty style which contrasts the tremendous flair they also add to the game.

Currently, the teenagers have wins over the likes of Renato Canuto, Vitor Oliveira, Nicky Ryan, Oliver Taza, and more.

Assessing Kade and Tye’s games by the numbers, since reaching the purple belt level, in the pro-no-gi circuit we see strong similarities.

Both have competed against some of the best our sport has to offer in events such as Who’s Number 1, Third Coast Grappling, and GrappleFest, events where the Ruotolo’s have favored a strategy based on being on top and staying on top, rarely diverting from this format. In fact, Kade was the only of the two who ventured outside this structure by falling back to attack the feet, albeit, only a couple of times. Kade was also the only one who pulled guard (3x), in all the matches observed. 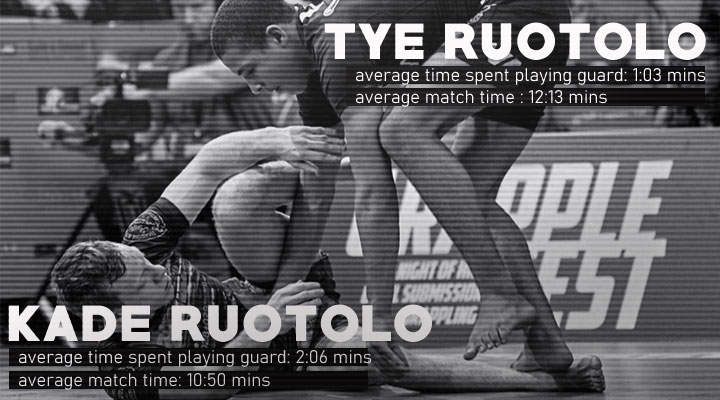 Still on the subject of the Ruotolo’s bottom game, another interesting aspect of the brothers’ guard is that as soon as their backs hit the mat, they are relentless at attempting a sweep, more often than not, spending under 20 seconds on the bottom. They do not try and cook an opponent, nor do they ever take the opportunity to breathe when playing guard, quite the contrary, the Ruotolos always push the pace, always pressure, even when on bottom.

Overall, the Ruotolo’s funky jiu-jitsu is vastly played from either a top position or a standing position, fighting for takedowns – one of the brother’s strong points. On average the Ruotolo’s score 0.5 takedowns per match, high marks for lighter weight athletes.

Below you can assess where the Ruotolo’s spend most of their time when competing, an average based on the aforementioned matches over the past few months. 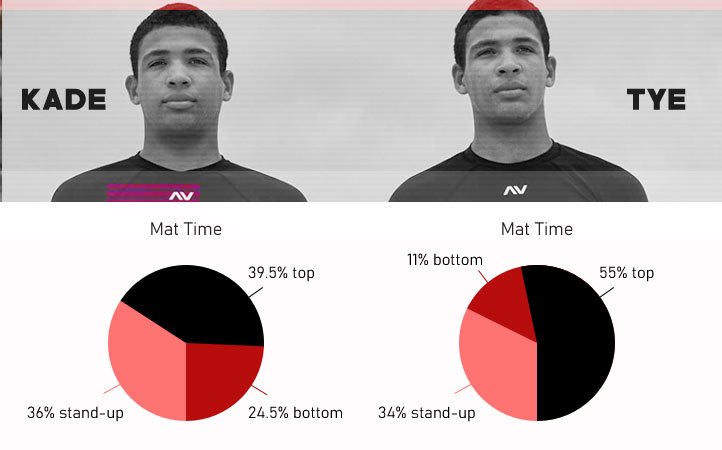 As seen in our overall mat-time average, the Ruotolo’s top game is by far their most used path to victory. Often seen as “scramblers” – and they do possess awesome scrambles, the Ruotolo’s have a very control-based game, often using their trademarked “leg-pin” (foot-on-shin) to control their opponent’s hips and attack. Among their most common attacks from the leg-pin are the Estima lock and knee-cut pass.

Although similar in which areas they prefer to battle and in their funky approach to the game, the two brothers vary substantially in their passing A-games. Tye often uses his range to force a toreando pass, but has the most success when cutting the distance, applying the knee-cut, leg-drag, and the body-lock as his most effective positions, these made 64% of his stabilized guard passes. Kade, on the other hand, had in his jumping darce choke/pass his most effective technique, and never once used the knee-cut (his brother’s most used overall position) with success.

In their nearly 14-year-old career in jiu-jitsu these two brothers have proved they will be a force in the sport. The recently shown potential for no-gi has opened plenty of doors for this dynamic duo, but we hope they keep the fire alive in their gi careers, as there is incredible potential to be equally successful there as well. Either way, you can bet this is not the last time we will be writing about these two grappling phenoms.