Ben Salas: BJJ and Self-defense – The real ‘submission only’ format

Much has been written about the effectiveness of BJJ as a self-defense art. The core of the discussion suggests that jiu jitsu’s evolution as a sport has severely hindered its efficiency – while practitioners focus on learning about points and advantages, rules and its intricacies they often forget about the origins of the martial art and what it was supposed to accomplish in the first place. In the vast majority of schools, self-defense is a very small part of the curriculum, and in most cases it is skipped altogether.

There are, however, still many people who were drawn to BJJ because of it’s all-around capabilities. In the old days, what was called ‘Taparia’ – basically a crude form of no-holds-barred fighting where you struck your opponent with open hands – was not only common, but encouraged as a way of teaching self-defense and testing students inside the academy. This method proved to be very realistic in terms of what you might encounter on the street. Not only you had to used the techniques learned, but you also faced a very real threat from your opponent. Being slapped hard and kicked tends to get your attention and keep you sharp.

Truth is, nowadays there aren’t really many people who use BJJ as self-defense on a daily basis, or who can intelligently talk about it’s effectiveness on real life and death situations. For this article we will be using the knowledge and expertise of Mr. Benjamin Salas. Salas, a black belt under Carlson Gracie Junior, has over two decades of experience with various martial arts as well as a vast military and law-enforcement career around the globe. Both as a police officer and as a soldier, you can’t just hope and expect that some technique might work.It has to work. It is, without a doubt a real ‘submission only’ scenario.

We wanted to know what set BJJ apart, and how effective were other arts: 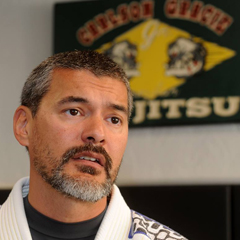 Ben Salas: Interestingly enough most of my martial arts background has been of little help to me when training police and military unit with a few exceptions. The striking methodology of Muay Thai and the weapon skills/concepts of the Filipino martial arts has been useful.

As for Jiu-Jitsu, well, it provides tactical constructs which are suitable for police and military units operating in a law enforcement role. Also it provides physical techniques which support these constructs, ones which can easily be modified under duress to cover new or escalating needs. Simply put Jiu-Jitsu’s approach to training is safe for personnel, it’s combat approach is based upon establishing control, and it’s techniques can be modified to match the escalating or deescalating needs of the officers.

What do you think about the way that self-defense is taught nowadays? How have you taught it over the years?

Ben Salas: I’ve had the opportunity to train law enforcement personnel from dozens of agencies around the world. What I teach and how I approach the training of law enforcement and military units is based upon their tasking. You have to take into consideration many different factors before designing the course such as the unit’s assignment, issued equipment, and prior training. My major areas of focus has always been subject control or mechanics of arrest, defensive counter-measures (striking), edged/impact weapon defense, counter retention, and weapon retention. Jiu-Jitsu plays a major role in these courses. Now, self-defense is a different topic to some extent.

Ben Salas: Jiu-Jitsu is to me, different than many martial arts in that it is also a combat sport. Combat sports by nature of their training methods, prepare their practitioners differently than orthodox martial arts. It’s about the playing and not about the fighting. You must have a way to train that allows you to improve without becoming too injured to acquire skills. We can break it down in a few topics.

Intensity: One critical reason for Jiu-Jitsu’s success in self-defense is that their use of force on force resistant training helps to build attributes which are useful in real life situations. In sudden assaults those who lack attributes such as strength, speed, etc. can be overwhelmed before technique comes into play.

Readiness: Jiu-Jitsu as we train it, sequences the techniques for safe randori or rolling. We normally use throw-hold-lock as our standard sequence. This sequence was Jigoro Kano’s conception. It allows for us to do the previous mentioned force on force training. The original sequence was often lock-throw-hold. Take your standard hip throw to knee on stomach to arm bar combo. It was traditionally done…arm lock to throw (rupturing the joint during the throw) to hold (knee on stomach immobilising opponent until the samurai could draw a short blade to finish his opponent). The problem with classical (pre-Kano sequences) is that although more effective, the training method prevented real force on force training. Thus the reason combat sports are so successful against orthodox martial arts. They do what they train and although it may not be as immediately lethal they have at least been able to do it 1000’s of times in practice against resisting opponents and this makes them ready.

Procedure: Lastly I think that it may be a matter of procedure or construct. Jiu-Jitsu practitioners have a very effective battle plan. It has in fact been driven into them from the start whether they realize it or not. To quote a great American teacher…”At the moment of conflict you do not want that voice in your head saying, Oh my God, I’m in a fight but rather I thought this might happen and I know what to do about it.” COL Jeff Cooper.

How do you conduct the training itself?

Ben Salas: One way we prepare students for this moment is by utilizing a construct for skill development – a tactical recipe if you will. This means that as we train, we measure our actions against a formula to ensure that whatever it is we are practicing, meets a set procedural standard.

The particular procedure I use when instructing Jiu-jitsu is (1) Defend the immediate attack – by shielding, recomposing, and/or posturing. (2) Move to a superior position – one that offers you the opportunity to evaluate the situation and isolate options. (3) Establish control then counter attack as/if necessary. When the opportunity presents itself, perform a safe and controlled self-extraction – leave the area of conflict and seek support/aid.

You know Jiu-Jitsu and do this too. A guy mounts you and begins to punch you in the face. 1) Cover against the initial assault. 2) Shrimp, bridge, and try and trap and arm and an ankle so you can roll him over. Now you are in his guard. Posture, frame, break the guard and decide…leave or pass and take the fight to him. Let’s say that you decide to take the fight to him. Pass the guard and secure a position of control. Counter attack, hold until the police arrive. I never taught you to defend the immediate attack, move to a superior position, establish control/counter attack but you know it. What if your attack fails? You know to maintain control and retry the same attack or to try a new attack or finally decide that you need to move to an even better position.

Mr. Salas, thank you for your time and for sharing your approach with us. Can you sum up this approach for us?

Ben Salas: All Jiu-Jitsu practitioners share a common construct and it supports self-defense and fighting wonderfully. Do all schools do self-defense? No. Should they? I don’t know, but I do know that a Jiu-Jitsu practitioner has better attributes because of the intensity of his training. I also believe his readiness is at a higher level than the average person because he has done hundreds of headlock escapes and mount escapes, etc. And that he is tactically more prepared because his mind has a procedure to follow which has been time tested.