Born in a coastal English town, Sam Michael Crook is a well-accomplished jiu-jitsu black belt under Marco Canha and a young man with a compelling life story. By the time he reached adulthood, Sam was set for a path of stability and hopefully, middle-class financial security. That changed when he found jiu-jitsu as a sedentary 21-year-old.

His contact with grappling opened Crook’s eyes to his potential and broadened his horizon, leading him to experience the world as an athlete, and as a volunteer in Africa. More recently Sam Crook joined Francis Ngannou’s (Ultimate Fighting Championship [UFC] heavyweight) foundation in Cameroon, where he is working as a coach, bringing jiu-jitsu to underprivileged children.

Sam has been a friend of BJJ Heroes for a few years and we are always keen on telling the world about what special people such as Crook are doing to better communities through jiu-jitsu, as such, we reached out and interviewed the current IBJJF British champion, and  Cameroon’s most recent immigrant to find out more about his projects.

How long have you been training?
I started 10 years ago at the age of 21. I was 20kg overweight at the time and was smoking and drinking way too much when my cousin persuaded me to come to training. I started BJJ at Fightworx Academy in Torquay under Darren Yeoman and stayed there until I moved to London in 2016 as a brown belt. After just over two years of training at Fightzone London, I was promoted to black belt in November 2018 by Marco Canha and Ricardo Vieira.

You only recently finished your degree I believe. When did you finish and what did you major in?
I began studying physiotherapy at Brunel University in 2016 when I moved up to London. I was getting a lot of injuries in BJJ and after having knee surgery I decided to go to university to get a degree so I would have a fall-back career if needed. I graduated last month with first-class honors – I’m so relieved as now I can focus on jiu-jitsu again!

You traveled a fair bit while training, right? I remember you spent 1 year in Rio training with Rico, and 3 months in California with the Mendes. Which other training places did you go to?
Yeah – back in 2014 after losing my first match at the Euros at purple belt, I realized I needed to dedicate myself more to BJJ if I ever wanted to get anywhere. I didn’t want to look back with regret knowing that I never truly gave it 100%, so I borrowed some money and packed my bags for Brazil. I trained at Fightzone Rio for 5 months, and also spent a fair bit of time at Marcio Rodrigues‘ team with guys like Matheus Gabriel, Yago and Ygor Rodrigues, and Lucas Barbosa. After winning a bunch of medals in Brazil, I started to gain confidence and realized that with persistent hard work and patience, anything could be possible.

It was after the trip to Rio that I came to stay with you and James [Roach] for a month while training at Fightzone London, before heading to the USA to train with the Mendes Brothers and compete at Worlds. After returning home from California, I was financially broke and needed knee surgery, so that is when I made the decision to go to university. I didn’t train abroad again until 2018 when I spent a month training at Checkmat HQ with Leo Vieira before competing at Masters’ Worlds. 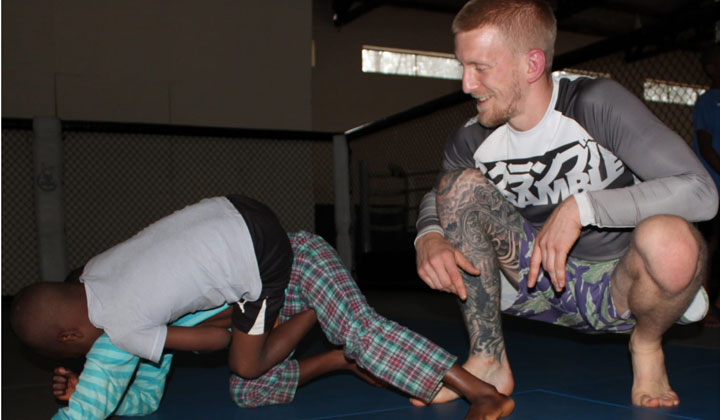 Sam overlooking his students at the Francis Ngannou foundation

When did you first start visiting Africa?
I went to Ghana for the first time back in 2009, shortly after starting BJJ. It was after the recession hit in 2008 and I got laid off from my job that I stumbled across an opportunity to volunteer abroad with an organization called Platform 2. The volunteers didn’t get to choose what country they wanted to go to as it was a government-funded program, and they ended up sending me to Ghana for 3 months! So between volunteering in Africa and starting BJJ, 2009 was a life-changing year for me.

I went back to Ghana multiple times over the years to visit friends, and then in 2017 after my first year at uni I decided to sign up for another volunteer position – this time as a team leader with Raleigh International working on a water and sanitation project in Tanzania. I found this trip really hard, as I was deep into BJJ at the time and being isolated from it for three months was not easy! 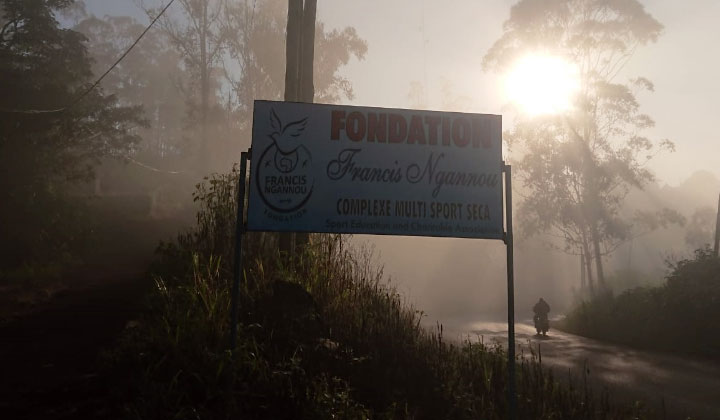 How did you link up with Francis Ngannou and this academy?
Back in April after I long day refereeing at the Abu Dhabi Grand Slam in London, I was mindlessly scrolling through Instagram when I came across an interesting post from Francis. He was asking for a volunteer BJJ coach to come to Cameroon for a year to teach the kids in his village and give them a way out of poverty. I was almost finished with my degree, but this sounded like a way more exciting prospect. I sent an email right away but didn’t really expect a reply. Fast forward three months and here I am in Cameroon!

What exactly is the project there?
The Francis Ngannou Foundation is a social project in the village of Batié, Cameroon, where Francis grew up and where his family still lives. The project opened in February 2019 and is the first fully equipped martial arts gym in Cameroon. Initially, lots of kids were coming, but as there were not many classes on offer, the numbers started to drop off. Now Francis has called in outside help from myself and ex-UFC fighter Leslie Smith, who just won her first Bellator fight. Leslie is not here yet, but she will be coaching MMA classes and I will be coaching BJJ. There are also boxing, kickboxing, karate and judo classes which are taught by local coaches who drive in from nearby towns. We are now trying to build the numbers back up and create a big team. The kid’s classes are for ages 7 and above, but we also have a bunch of adults coming to train. All the classes are totally free, as the FNF is a non-profit organization.

What are your short and long-term goals in Cameroon?
Short-term goals are to provide the children with new skills, teaching them respect, discipline and dedication, and inspiring them to dream big. We want to make a positive difference in their lives, expanding their horizons and giving them a route out of poverty. The aim is to build a huge team of kids and adults and eventually be able to take some of them abroad to train and compete, using martial arts to build a better life for themselves. At the same time, we will also be passing on skills such as how to teach and run a gym, with some of the older kids helping out during the classes.

Long-term, the aim is to increase the popularity of MMA and BJJ in Cameroon and become the first gym to produce high-level fighters and coaches in West Africa. One day the Foundation will be self-sufficient and run entirely by local talent. It will be a great day when the first black belt is awarded to a student who started their training here at the FNF! Hopefully, with time the project will produce many high-level competitors and champions.

Another possibility is to set up some kind of exchange in the future, where the students can travel overseas to train and visitors from around the world can come and stay at the Foundation, training BJJ or MMA while at the same time getting to visit Cameroon. 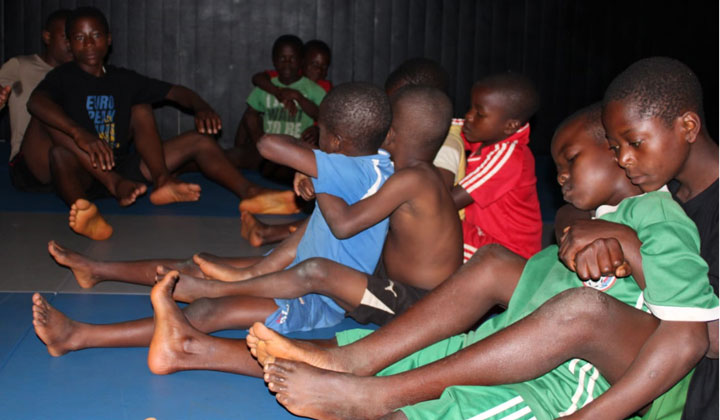 What is the standard of living there?
Francis’ family is taking great care of me. They’ve built me an awesome little apartment on the second floor on his aunt’s house, which is just a 15-minute walk from the Foundation. I’m also being treated to plenty of amazing Cameroonian food!

What have been the main difficulties you have encountered there so far?
The main one is the language barrier! I did GCSE French in school 15 years ago, but I don’t remember much of it! I’ve been studying a bit every day and things are gradually improving, but it’s going to take time before I can hold a regular conversation!

I’ve also been unwell for the last 4-5 days, and when you are away from family and friends in a place where you’re struggling to communicate, this makes things extra difficult! I’m not really sure if this is due to the change in diet and climate, or from mosquitos and other critters. Maybe both!

Another thing which is difficult is just adjusting to village life! Coming from London to a quiet mountainside village is extremely challenging, as everything is spread out over miles of hillsides and there is not much to do between teaching and training.

How long do you intend to stay in Cameroon?
The plan at the moment is to be here for one year, although we’ll see how things go – I may end up coming back out after taking a short break to visit family and friends in the UK! Who knows what the future will hold!

On a closing note, if anyone has any tips for teaching young kids in a foreign language or any ideas for BJJ games and drills, please get in touch! Also, any links to French BJJ resources would be much appreciated! Thanks for giving me the opportunity to spread to word about the project and the work we are doing here at the Francis Ngannou Foundation!

You can get in contact with via social media at: